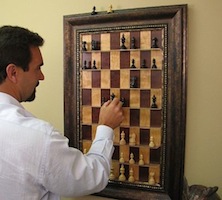 In today’s busy world, the closest we come to “game night” is often Words With Friends on a four-inch screen. Some might say strategic brain benders played in three dimensions are a thing of the past. Others—for instance, Lakewood’s 62-year-old Steve Schrier—are simply adapting. Schrier’s patented creation, Straight Up Chess, puts a twist on the classic game with gorgeous, individually crafted boards that hang on the wall and serve as both art and entertainment. Players alternate turns, making moves whenever they happen to walk by, and indicate their play with a “last move” marker. 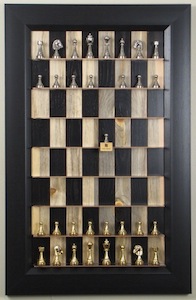 Schrier allows buyers to choose from eight backgrounds and 14 frames for the boards (all around $200) and stocks an assortment of chess pieces (most sets are less than $100, but you can spend up to $2,600 on specialty, hand-carved varieties). However, it’s his recently debuted Colorado set (pictured at left)—made with beetle-kill pine—that has us thinking about ditching the game apps on our phones in favor of a more hands-on battle of wits. We caught up with Schrier to learn more about his unique product.

5280: Do you have a background in woodworking?
Steve Schrier: I have a degree in business and have sold insurance for 35 years. Woodworking was a hobby when I was young. I always thought I could pick it up again when I retired. When I was young, I turned a large wooden chess set. The king was 11.5 inches tall and the table was 44 square inches. The set was in the way, and I was trying to find a place to store it. Sitting in my office one day, I had the idea to put shelves on the wall and use the chess set as decoration in my office. Within a couple of minutes my next thought was, “What if I could put it on the wall and still play chess?” And Straight Up Chess was born. I am not a professional chess player or woodworker—nor have I ever run an Internet-based business—so I’m learning as I go along.

5280: How did you go about designing the Straight Up Chess board?
When I first came up with the idea, I was picturing the board as square. It didn’t take long to figure out that regular chess pieces would not look good on a vertical square board; I would have to redesign and manufacture a new style of short and fat chess pieces to fit the square board. Three weeks later, I was driving across Nebraska and still trying to come up with how to make the chess pieces, and I was getting frustrated. I remember thinking, This is stupid; there are so many nice chess sets out there. I wish I could just use a standard chess set…maybe I need to change the board to fit the sets! I immediately coasted to the side of I-80 to pull out my calculator. My wife thought we were having car trouble. But somewhere in the middle of Nebraska is when I had the idea to have the boards fit the profile of the chess pieces. The result was the rectangle shape for the Straight Up Chess boards and a shape that, of course, esthetically looks better on a wall than a square. From there, every little detail was a challenge; not only on how to make the boards, but how to frame them, how to hang them, how to make the move markers. Some processes would have come a lot easier if I was a professional woodworker, but for some processes, I think it was better that I didn’t know what I was doing and had to think outside the box.

5280: How many boards have you sold?
I have been making them for five years, and in that time, I’ve sold around 2,000—and the sales are growing every year. Today I sent one to Australia, one to Great Britain, and one to Colorado Springs, and had an inquiry from the Middle East. That wasn’t a normal day, but it does happen now and then. Coming up with a unique idea for the game of kings that has been around for over a thousand years and played around the world has made the marketing part fun and easy.

5280: What makes the “Colorado” board so distinctly Colorado?
I call it my Colorado set because it brings together the beetle-kill pine material and Colorado’s rich mining history with the gold and silver (actually gold- and nickel-plated) chess pieces. They look great against the beetle-kill board, and I love the contrast between the rugged board and the fine chess pieces. It just fits Colorado!

5280: Where can we get one?
Customers can order online at straightupchess.com, or they are welcome to stop by my dusty dungeon of a shop on Santa Fe in Denver by appointment (720-837-0114) and select their board, frame, and chess pieces. They can also stop by my booth at a festival. I try to keep those posted on my website.

—Images Courtesy of Straight Up Chess