If opening a new business is all about timing, it seems that River North Brewery’s Matthew Hess has all the luck. This engineer-turned-brewer opened shop just over a year ago at a time when the industry was booming—and the RiNo area was (is) trending. Taste his Belgian-style brews, though, and you’ll see that Hess’ brewing prowess is not just happenstance; he’s honed his homebrew recipes to make some of the most interesting beer style-mashups (a sour brown, anyone?) in the Mile High City. We sat down with him this summer to chat about the Great American Beer Fest, the Rockies, and minivans.

Brew to try: The Hoppenberg Uncertainty Principle (a Belgian-style IPA), which was originally called Hypothesis until a winery sent them a cease and desist letter. “The name is a little nerdy,” says Hess. “But it is also just crazy.” The brew takes a more traditional American IPA and pumps it up with a very Belgian-style yeast strain.

5280: What was the Great American Beer Festival like last year?

It was all hands on deck. The Friday, the Saturday, the Sunday, the crowds were huge. They were great. It was fun. And then I think we just closed up on Monday and said, “OK, we’re taking a break.”

5280: How long was it between when you decided to start a brewery and when it opened?

It was about a year. I was working in aerospace. I was an engineer before I started this. It was too cyclical for me. There was too much uncertainty. You live and die by the Congressional budget every year and I wanted to do something that I could have some control over and that I could be passionate about, and not wait around for the right program to have the right funding at the right time.

I was home brewing for a few years and had the conversation with my wife. That was over Christmas 2011. I resigned in January. I had started to write the business plan, and I finished the business plan in January of 2012. I went to friends and family and, basically, from there we were off to the races. 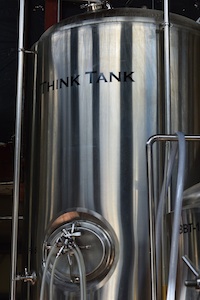 5280: And you opened in a neighborhood that’s really hot.

We lucked out on timing. There’s no question. When we found our spot here in the middle of the summer in 2012, there were lots of signs on buildings. “For lease.” “For sale.” Before we were even open, all kinds of condo projects and apartment projects were popping up everywhere, and it has been crazy ever since.

5280: Does Denver have too many breweries?

When I opened River North, I knew that there were a lot of breweries in planning that were trying to open the same time or were opening. But since then it is beyond what I thought was possible—but it is also good. I thought Denver didn’t have enough breweries when I opened up. When you compare Denver to the number of breweries in Fort Collins, at the time, there was no doubt that based on population Denver should have more breweries.

We have a decent amount of room. We can certainly go up. I never saw our brewery when it was full of all the equipment that Flying Dog had.

It kind of is. There was a brewery here before Flying Dog. I’ve put together bits and pieces; I think they were the ones that originally got the space set up.

5280: You are so close to Coors Field. Do you get a big Rockies crowd?

We get a really good Rockies crowd. I would say that we have two sets of locals. People that are coming to the Rockies games and want to stop in, and then we have all the people that come in when it is not a Rockies game.

I wanted to make sure we had enough capacity so that we weren’t running out of beer all the time. That certainly happens to a lot of other breweries and I wanted to be able to provide a consistent set of beers in the taproom for the first year and also to expand into the packaging side of things.

5280: How have your brews changed since you opened?

We started out with a set of beers that were my homebrew recipes. From there, we’ve really expanded into lots of barrel aging. We’re growing the barrel program as fast as we can right now because, well, I like barrel-aged beers. 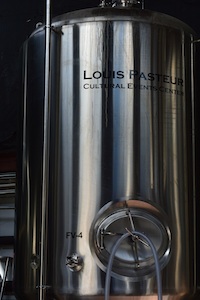 We brew, pretty much, exclusively Belgian-style beers. That’s maybe not the best business decision, although Belgian style beers are one of the cooler styles of beer that you can be brewing right now. But it also what I like to be brewing. I like beers that show off what brewer’s yeast can do. Belgian beers are very yeast forward beers.

There are hundreds of strains of brewer’s yeast that are available to us. Any brewery can ask some of the larger yeast labs in the U.S. for a strain and they can pull them out of cold storage and propagate them up and you can brew with them. You can go to Europe and pick some of the more hard-to-find ales and then propagate out of the bottom of one of the bottles.

One of my favorite things to do before I opened the brewery was to take a batch of home brew and split it into four portions and then use different yeast to see what the difference was, because you can get so much character out of just changing the yeast strand. We’ll still do that to this day. I think people don’t attribute enough flavor in beer to the yeast that ferments it.

5280: What other elements do you like to experiment with?

As long as you pick the right yeast, you could have a completely different beer if you ferment it at 65 degrees and at 55 degrees. They might taste similar, but people would recognize that there is a significant difference—to the point that they are almost different beers.

5280: That’s a lot of variables. Do you keep flagship brews on your list, too?

I would say five or six of the original eight beers, we still have on tap on a regular basis. I want to give people variety. But, as a brewer, I want to show that I can make a consistent beer. Hopefully, people appreciate that.

5280: Is it hard to figure out what style of beer your recipes are?

Most of our beers are somewhat hybrid in nature. A cross of some American take and a more traditional Belgian character. [For example,] the black IPA in the taproom is a Belgian black IPA. It is a very, very dry black IPA that is a little more roasty. It’s like a triple hybrid. It’s a black IPA/Belgian/porter. We’ve had people accuse us of brewing one version of all three of those.

We don’t really filter most of our beers. We’ve fooled around with a little bit of filtration but that’s not my goal (to make the most beautiful crystal clear beer that anyone has ever seen). I don’t think people expect that anymore in Colorado.

We’ve had a few experiments that went bad. And they were full-size experiments. They weren’t necessarily bad in terms of they got infected or something like that. They just didn’t ferment out how I thought they would.

5280: Where is your favorite place to drink in Colorado besides your taproom?

I have to go with the Great Divide taproom. For the first couple of years that we were living in Colorado, that was probably our favorite place to go.

5280: What about a favorite Colorado beer that you don’t brew?

As far as a go-to beer: Original Yeti—without any of the special things.

Recently, we signed with C.R. Goodman, the beer distributor. They’re rolling us out as we speak over the whole state. There are a lot of breweries, I think, that would hold out longer than we did. But we got to the point where we did about 30 stores and we realized, “Boy, this is taking up two days of my time per week to manage all the orders, get everything ready.” What am I good at? I think I’m a better brewer than I am a distributor. I’d rather be brewing two more days a week than running around.

5280: You were making all your deliveries before?

For the first year, we did it all in a crappy brown Chrysler minivan. That was when I knew I was all in on the brewery: when I gave up my SUV to get a minivan with all the seats taken out. You do what you’ve got to do.