Anthony Pigliacampo has been inside more McDonald’s outlets than he’d like to admit. He’s toured kitchens in China, Japan, Australia, and throughout the United States. Yet, to find what he believed to be one of the dirtiest McDonald’s in the world, Pigliacampo merely had to drive from his home in Boulder to the corner of 16th and Champa in downtown Denver.

That’s where, a few years ago, he found what he still refers to as among “the grossest” Golden Arches he’d ever seen. Its front windowpanes didn’t meet, so wintry gusts chilled the store. Its policy of unlimited soda refills made its dining room a popular haunt for the homeless. The loitering problem got so bad that the city, curiously, began piping classical music through speakers mounted outside the building in order to shoo away the lingerers.

On a brisk morning this past fall, the Beethoven is still playing, but the McDonald’s is gone. Wrapped along the windows whose panes still don’t quite meet in the middle is a graphic showing a sleek, modern dining room. It’s an advertisement for everything the former tenant wasn’t—and a peek into what might just be the future of casual dining.

By February 2014, the space will house Colorado’s seventh Modmarket, a farm-fresh restaurant chain started by Pigliacampo and his partner, Rob McColgan. An eighth will soon follow in Highlands Ranch, an embodiment of the Front Range’s status as the home of the “fast-casual” culinary movement. The term describes something between fast food and fine dining: You order and pay at the counter and watch while the food is made. Subway started it. Chipotle perfected it. Modmarket and others want to take it one step further. “Colorado is where a lot of these brands emerge and grow,” says Darren Tristano, the executive vice president of food industry research firm Technomic. “When it comes to fast casual, Denver is an incubator city.”

Almost a decade ago Pigliacampo, a mechanical engineering graduate from the University of Colorado Boulder, was working for Ideo, an industrial design firm. “I would be designing some needleless vaccine injection devices,” he says, “and then, suddenly, I’m working on random consumer products, like toilet brushes for Procter & Gamble or breast pumps for Novartis.” One endeavor involved globe-trotting to different cities and visiting McDonald’s franchises. (He can’t divulge the specific nature of the ongoing Ideo project.) “Just flying to a foreign city and driving straight to the nearest fast-food restaurant is a really odd way to see the world,” says Pigliacampo, who was astounded to realize what a cultural export American fast food had become, particularly in China. “There are lines of people waiting to get Big Macs,” he says. “The stores are 6,000-square-foot palaces with three floors.” 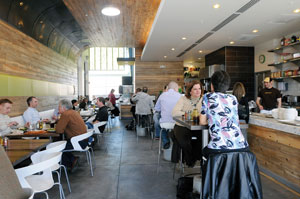 A svelte distance runner who worked on multiple products at Ideo designed to address type 2 diabetes, Pigliacampo was amazed at the size of the Chinese urbanites. “Two-thirds were obese or on their way,” he says. It was clear China was embracing popular American eating habits that would come at the expense of good health. “Our next great export after fast food was going to be all the ways to treat obesity,” he says, “and we were going to make a fortune on both.”

Pigliacampo left Ideo in 2005 to start his own design business with a partner; he sold it about two years later. The modest windfall helped him cultivate a new idea: All that travel had convinced him something was missing from the American casual dining scene. Although he often ate at Whole Foods, he realized it wasn’t business appropriate because, he says, “You can’t take clients out to lunch to a grocery store.” That got him thinking: What if you could have Whole Foods quality with McDonald’s efficiency?

He called an old friend, Rob McColgan, whom he’d known since high school in Harrisburg, Pennsylvania. McColgan had landed at Goldman Sachs, and although he was making “so much effin’ money” on Wall Street, Pigliacampo says, McColgan shared his friend’s entrepreneurial inclinations. That neither of them had any restaurant experience didn’t matter. “We didn’t know jack about the business,” Pigliacampo says, “so I figured we could contribute equally.”

The two started researching the restaurant industry and found that while “fast casual” commanded less than 10 percent of the industry’s revenue, it was its fastest-growing segment. So with his wife’s blessing, McColgan quit his job, and he and Pigliacampo figured out where to launch their concept. Their list of possible cities quickly narrowed to one. McColgan had visited Pigliacampo during the latter’s time at CU Boulder. “I started to realize that the first time I had Chipotle was when I was visiting Anthony,” McColgan says. “The first time I had Noodles [& Company], too.”

The list goes on: Qdoba, Einstein Bros Bagels, Boston Market. Colorado now headquarters five of the 16 largest fast-casual concepts in the country. One analyst dubbed the intersection of Sixth Avenue and Broadway the national epicenter of the movement. On top of that, some of the largest fast-food chains often use the Front Range to test new products, such as when St. Louis–based Panera Bread opened an early drive-thru near Colorado Boulevard.

Because people in Denver have been exposed to healthier, faster, cheaper food for longer than most other Americans, they’ve been “conditioned” to welcome the concept, according to Dan Fogarty, an executive vice president at Noodles & Company and one of Chipotle’s first marketing staffers. He recalls Dallas customers trying to make reservations at the first Chipotle there and wary Texans “splaying burritos like a frog” because they’d never seen one served in foil or eaten without silverware. But Denver diners no longer react with that kind of apprehension. It’s why the men who bought Boston Market left Illinois for Golden, why Chipotle founder Steve Ells migrated from California to open his first shop in Denver. And it’s why Pigliacampo and McColgan left New York.

The first Modmarket opened in 2009 on Boulder’s hyper-competitive Twenty Ninth Street mall. Pigliacampo and McColgan weren’t sure how to plan their menu at first; they only knew they had to be OK with eating it three times a day, sometimes seven days a week. “The whole point of the Modmarket menu is, What do Rob and Anthony want to eat all the time?” McColgan says. “We’re part of the demographic we’re trying to cater to.” At first this meant just pizzas and salads. Then a few months after opening their first store, a blizzard dumped 10 inches of snow, making them realize they needed to add soup. Sandwiches came after that. “Had we been in any other market, we would have stopped at gluten-free dough,” Pigliacampo says. But because this was Boulder, they made sure their sauces were gluten-free, too. Like a lot of their decisions, it was one that would affect the greater Denver food ecosystem.

Though the chain has now expanded to Glendale, Greenwood Village, Lakewood, Cherry Hills, and Longmont, Modmarket still makes almost everything in-house, from scratch. The outliers are gluten-free dough, sourced from a local baker, and barbecue sauce for pizza. After a year of searching, Modmarket found a gluten-free, high-fructose-free sauce sweetened with agave that actually tastes good. (The concoction, along with the gluten-free dough, is now also used by numerous higher-end Denver restaurants.)

Living in this fast-casual hub also benefits Modmarket’s hiring practices. When the duo had three stores and needed a new operations manager, they didn’t have to do a nationwide search; they simply plucked an executive who’d been running 150 Qdoba locations. Denver even has its own fast-casual social scene: Marketers from Smashburger (the fastest-growing fast-casual concept in the United States) and Mad Greens (11 locations and counting) organize monthly happy hours for all local fast-casual employees.

Modmarket still can’t compare to Chipotle’s 1,500 locations on multiple continents, Smashburger’s incredible growth, or even the steady climb of Noodles & Company. But McColgan claims each Modmarket location can outperform its larger competitors in unit sales and profitability. Next on the to-do list, after the opening of the 16th Street Mall store, is expansion beyond the Front Range—a store in Dallas is slated to open this spring. And with a new contract in hand to open a location in February in DIA’s Terminal B, millions of travelers per year will soon be exposed to Modmarket. “If we don’t have a couple hundred units in 10 years, then we’ve really screwed up,” says Pigliacampo, who plans to market the contrast between their food—fresh, local, and gluten- and high-fructose-free—and that of their soon-to-be neighbor on the DIA concourse. As McColgan says, “There’s something so fitting about being next to McDonald’s.”