Imagine waking up each morning happy to have a job but not knowing exactly what you’ll spend your day doing. That’s the life of the Colorado Rockies’ Jordan Pacheco. Although officially listed as a catcher/infielder, Pacheco is a true utility player: part-time catcher, first baseman, pinch hitter, and—and!—designated hitter. In anticipation of the team’s home opener (April 4), we asked Pacheco how he keeps his head in the game when he doesn’t know where he’ll play next.

Division Of Labor
Pacheco took the field in 95 out of 162 games in the 2013 season with an annual salary pushing a half million. That means he pulled in more than $5,100 per game he played. 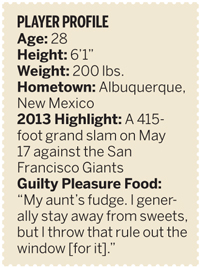 Work It Out
Playing catcher sounds fun—until it’s 95 degrees at the bottom of the seventh and you’re sweating profusely. “You look pretty cool [in the gear],” Pacheco says. “Then you have to sit back and squat for a three- or four-hour ballgame.”

Play Ball
Coaches could tell Pacheco what position he’s playing (if any) mere hours before a game. If he’s playing catcher, manager Walt Weiss will try to let him know a full day in advance so Pacheco can prepare for specific pitchers and hitters.

Field Of Dreams
“I have to take a different approach to the mental side because I’m not playing every day,” Pacheco says. “This year, I’m going to be a little more laid-back. When they are ready for me, I will do the best I can to get the job done.”

Serious Eats
Pacheco’s pregame rituals vary each season. Past superstitions include consuming a PB&J after batting practice and wearing the same socks all season.

From The Bench
Instead of wearing himself out mentally too early, Pacheco waits until closer to when he’s entering the action to start his full mental and physical warm-up. “I have to pick my points and time to be ready,” he says. “If I know I’m starting, I’ll start to get ready the night before.”