Normally, people don’t get pedicures to destroy them right away, but that’s exactly what 15-year-old Madelynn Gorman-Shore plans to do. The taekwondo athlete asked her pedicurist to paint a stylized white “TRT” on her big toe over a black base color, to honor the Littleton studio where she trains. Gorman-Shore hopes to compete hard enough to scratch the logo off, even if it leaves her toes bloodied and bruised in the process. Just an inch short of six feet, this towering teen is about to compete on the biggest stage of her young career: the Junior World Taekwondo Championships in Chinese Taipei (March 23–26) as a member of Team USA.

Gorman-Shore has dominated national Olympic-style sparring tournaments for two years, which help earn her a spot on the U.S. team for the upcoming competition. She took up the sport when she was seven years old after seeing a taekwondo demonstration, and now devastates with those black-covered toes. But it isn’t easy. “[Taekwondo] is a combination of mental and physical strength,” Gorman-Shore says. “I’m still working on the mental part. Sometimes I want to just give in.” She practices six nights a week, attends a co-ed class of mixed ages, and admits that it took her awhile to get used to the fight. “I didn’t always like sparring,” she says. “I didn’t like getting kicked at all.” 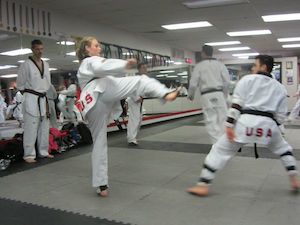 When she’s not kicking butt, Gorman-Shore is a pretty typical teenager. She’s a fan of the Colorado Avalanche and forward Matt Duchene. She plays volleyball when her schedule allows, and recently got a driving permit. Despite all of the typical teenage distractions, though, her focus is on making the 2016 Olympic team. (The United States’ Paige McPherson won a bronze medal at age 21 in the 2012 London Olympics, and the U.S. has been competitive in taekwondo on the Olympic stage since the sport’s introduction in the 2000 Sydney games.) That look-ahead philosophy is part of what keeps her motivated: “At school, people don’t really understand the concept of what I do,” Garman-Shore says. “But I hope they will try to understand in the future.”