The People: Father and son brew team Dan and Jack Diebolt run the joint and on Sundays, you might see mom—Martha Diebolt—working the taps.

The Space: This eight-month old warehouse-turned-brewery is nestled in Highland’s Sunnyside neighborhood. The 8,000 square-foot building used to be a meatpacking plant in the 1950s and sat vacant for a few years before the Diebolt family moved in last summer. The tasting room is fairly small (holds about 50), but an adjacent room is large enough to host private parties, live music, and—on its off days—games like ping pong, cornhole, and ladder ball. 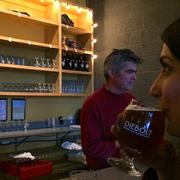 The Brews: Diebolt Brewery has a selection of brews—IPAs, brown ales, porters, and wheats—but their real specialty is Farmhouse and French-style ales. The Diebolt family has a French ancestry, and when Dan started brewing beer back in the 1980s, he started with concoctions that paid homage to his heritage. At any given time, the brewery’s eight to 12 taps hold about half American-style offerings, and half French derivatives.

Buzzed Trivia: Their flagship French ale, Anton Francois (pictured), is named after the family’s first ancestors to step foot on American soil—two brothers, Anton and Francois—who migrated from France to Louisiana in the 19th century.

Sample This: The Anton Francois (of course). Also: the DIA IPA, which stands for Diebolt’s International Ale and is made with three types of international hops.