Dinner party guests at this adult treehouse check their fear of heights at the door—which can be found 16 feet off the ground in a giant spruce tree in Eagle County. The landowners gave architectural designer Missy Brown, of Denver-based Missy Brown Design, carte blanche to design something fanciful and fun—and secret. Because public skiing and hiking trails cut through the land, the treehouse had to be obscured. “We needed a floor plan that would ‘nestle’ into the side of the tree,” Brown explains. After combing the property via snowmobile, she came upon the perfect 90-foot spruce. 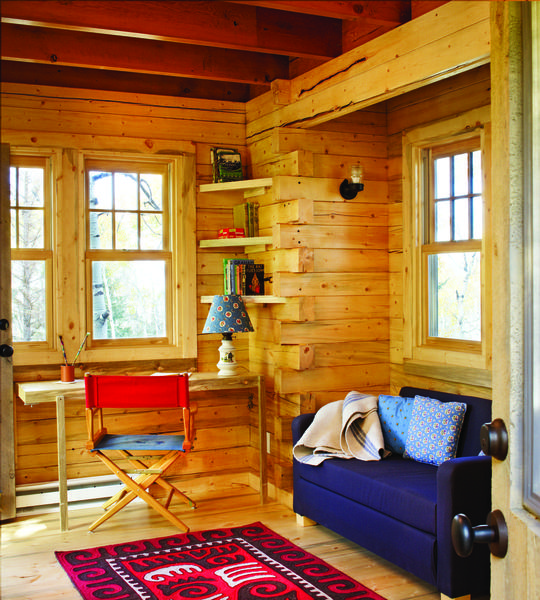 Brown says the design was actually “easier to pull off up in the trees.” With mostly air in the way, she says, the 150-square-foot treehouse could be altered or expanded without limitations. “It was a very fluid design process,” Brown says. “We worked closely as a team. You have a lot more leeway when you’re not tied down by a foundation.”

Exterior > The platform and beams are locally milled Douglas fir, and the walls are beetle-kill from the property. The spiral staircase, which provides access to the main room, was a leftover from another of the landowners’ projects.

Interior > The modern-rustic interior, with walls of beetle-kill and lodgepole pine, “had to be multifunctional,” Brown says. While the owners mainly entertain here—yes, there’s even a kitchenette—they also have grandchildren who are naturally keen to host sleepovers. An Ikea foldout sleeper offers a place to bed down; storage nooks are tucked up into the rafters; a folding desk and a dining room table provide surfaces that appear and disappear as needed; and baseboard heat keeps the space comfortable in the snowy months. 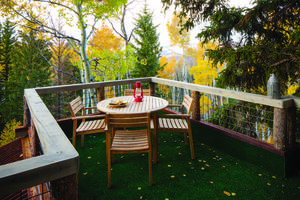 Decks > Repurposed cattle fencing from a local agricultural supply store surrounds the rooftop deck, which is outfitted with a teak dining set. A side deck off the main room has a built-in love seat by the tree trunk as well as two French folding chairs.