You don’t have to be an outdoorsperson to appreciate Colorado’s azure sky. There’s a magic in it, an ability to remind us of summer, and to brighten our day, no matter the season.

Denver-born painter Laura Guese has been staring at that expansive sight for 31 years—and it never fails to inspire. “Being a Colorado native, I’ve always been in awe of our skies here,” she says. “The subject stays the same. My style is evolving.” 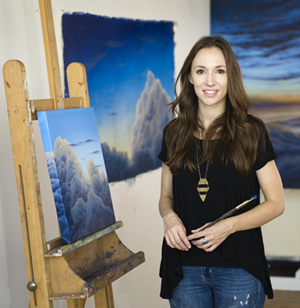 Since becoming “serious” about painting around age 12, Guese (pictured, right) has been committed to honing her craft, from art camps to classes at the Art Students League of Denver to a recent artist residency in France. (Guese graduated from Saint Mary’s College of California with degrees in studio art and French.) In fact, it was the latter stint that influenced her newest works, which feature what she calls “cloud abstractions.” Her latest large-scale pieces feature clouds that bubble like coral—in hues of blue, black, and soft pink—that seem to burst quietly into the canvas from the edges. About a dozen of these works (some of which were just being completed this week) will be exhibited in Ciel Colorado at LoDo’s Mike Wright Gallery from January 16 through February 28.

Unlike many artists, Guese doesn’t start with a sketch or work from a photograph. Instead, she lets an idea develop in her mind and then starts painting. She layers and blends her oil paints, all of which she mixes herself from just the three primary colors and white, in her RiNo studio which, of course, features massive windows. “I want the viewer to feel the way I do when I paint it, to become lost in the work the way I do,” she says. “Our modern lives are so hectic. Staring at the sky, you feel this tranquility. That’s what I’m drawn to as an artist. [The sky provides] infinite inspiration.”

Opening Details: Guese will be in attendance for the opening night reception, which runs from 5 to 9 p.m. on January 16. The event also doubles as a one-year anniversary party for the gallery, so expect live music and cocktails to accompany Guese’s skyscapes.