There’s no better venue than the Sundance Film Festival to launch a documentary—just ask Boulderite Louie Psihoyos. His film about the slaughter of dolphins in Japan, The Cove, won an Audience Award in 2009, kicking off an accolade-studded year that ended with an Oscar in 2010. Now Psihoyos is back at the Park City film fest (January 22 to February 1) with his second entry, Racing Extinction. Although cagey about the plot, Psihoyos sat down with us to talk about using the same kind of spylike gadgetry and covert ops he and his team employed in The Cove to tackle a much broader—and, in his eyes, more important—ecological disaster: how humanity is on pace to wipe out half the world’s species by 2100. 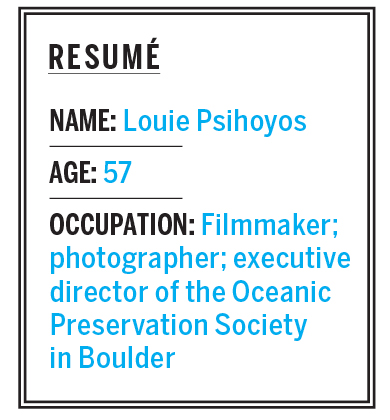 Your first movie, The Cove, was a huge success. Are you concerned about Racing Extinction living up to expectations?

A lot of filmmakers told me not to bother making a second film. They always suck. It’s going to be impossible for people not to compare Racing Extinction with The Cove, but I think Racing Extinction is going to be more engaging. The Cove was hard for people to watch; it turns out people don’t like to see real-life horror. This new film is more exciting. More uplifting. I know it sounds like a depressing topic, but it’s another eco-thriller.

Why is sticking to that genre, the eco-thriller, so important?

Documentaries that just shovel information at you don’t hit you the same way. You have to get people in a space where they feel like they’re going to be entertained, so they re-enter the world looking at it through a new light.

Was your second movie easier to make?

This film is by far harder because it’s so ambitious. The gear we created to pull this off was incredible. We converted a Tesla into a Bond vehicle. This is the first car in the world to have an electro-luminous paint job. We can change the color with the flick of a button. It has a forward-looking, military-grade infrared camera that can see methane leaking out of oil and fracking wells.

How do you use the car?

You have to see the movie.

Any hints about what audiences can expect?

We do a lot of undercover work in China. We’re busting rings selling endangered species. We do that same thing in America. We do it in Korea—places where you get thrown in jail if you get caught doing the sort of espionage that we’re known for. There’s this element of intrigue that The Cove has, but Racing Extinction is more exciting because we do a lot more of it.

You’re tackling a huge topic here. How do you tell so many stories and still connect with an audience?

We look at things from the biggest animal to the smallest. It’s obvious people should care about blue whales, but the world can live without them. Plankton is the bottom of the food chain. They’re responsible for at least every other breath you take. Some people say we’re losing plankton at one percent a year. When you start breaking down the fragile web we’re all connected by, it doesn’t take too long to see the environment affects humans as well.

Is the ultimate goal after Sundance to win another Oscar?

Some metal and glass awards are just the collateral that comes from doing something really important.

How did you go from photographer to documentarian?

I used to work for Fortune Magazine photographing people with too much money. One of the people I photographed was [James] Clark, the guy who started Netscape, Silicon Graphics, [and] WebMD. He’s worth more than a billion dollars. He became my dive buddy. It was our third time in the Galapagos, and we saw fishermen illegally long lining for sharks in a marine sanctuary. He said, ‘Somebody should do something about this.’ … I said ‘Let’s use your money and my eye, and we’ll make a film.’

Did The Cove have the impact you wanted?

Not yet. … They’re killing about 65 percent less dolphins and porpoises in Japan now, but they’re actually catching more of them for dolphin shows. [But] in one way we’ve been a great success: I think we helped spawn [the documentary] Blackfish. The executive producer of that film became a vegetarian and then a vegan after seeing The Cove, and the first film she ever financed was Blackfish. … This is a continuum. You can’t just do a film—it has to be accompanied by an educational campaign. Paul Allen’s group—the co-founder of Microsoft, the guy who owns the team who kicked the Broncos’ butts in the Super Bowl last year—he’s financing [Racing Extinction’s] educational campaign.

Why is Racing Extinction so important?

I think it’s the most important issue on the planet, bar none: The loss of species caused by us. Future generations will look back and think, ‘How did those people just allow all those species to vanish on our watch?’ What we’re doing right now with the oceans, the burning of fossil fuels, whether you live in Colorado or you live in California, the burning of fossil fuels is acidifying the oceans. By the year 2100, we won’t have any corral reefs left.

Does you eco-thriller style ever draw criticism from other documentarians?

I’ve never heard it before. In fact, you’re the first person who’s ever raised that conversation.

You say your team in Racing Extinction is the Avengers, but real. What do you mean?

[We] have these incredible people with special sets of skills. The real-life Iron Man, Elon Musk, … he’s made the best car in the world. He [developed the Tesla, an electric car] because he realizes somebody has to do something to get the world off of fossil fuels. … [We] have somebody like Leilani Munter. She is this little, diminutive woman racing cars in a male-dominated sport. And she’s really kicking ass. And all of her cars have this environmental message on them. The idea is she can reach 75 million race fans who ordinarily wouldn’t think of going solar or getting off fossil fuels. … Tony Malkin, he’s the CEO of [the] company that owns the Empire State Building. He recently greened it. He took one of the most iconic skyscrapers in the world, built in the 1930s, and he greened it. Now he’s saving $4 million a year because of the energy savings. … [Everyone] in the movie is actually trying to save the world—unlike the Avengers, which are just actors pretending to be superheroes who are trying to save the world.

What was the cost of Racing Extinction compared with The Cove?

Racing Extinction is more money. I can’t talk about figures. [But] we spent almost as much on the educational campaign [for Racing Extinction] as what The Cove cost. The most important thing, when people get out of a movie like this, is [for them to] say, ‘What can I do?’ We want to give them plenty of things to do because there’s a lot of work to be done.

Do you have a distributor yet?

We’re hoping to get a distributor at Sundance.

Update: Discovery Channel announced on February 10 that it has picked up domestic and international distribution rights to Psihoyos’s Racing Extinction. The film will be premiered in all of Discovery’s 220 international markets, and will also have a 10-market U.S. theatrical run, special event screenings, and be available on video on demand after its initial release.