During a natural disaster there’s a lot to take into account: What to pack, where to go, and, of course, how to keep your family safe. For many, that family includes pets, which can often be displaced when catastrophes strike. A team of doctoral researchers at University of Colorado Boulder designed a website that will help reconnect lost animals with their human companions.

EmergencyPetMatcher, which White plans to launch when it’s next needed, allows users to create profiles for animals that are missing or found. The site then uses algorithms to sort details and pair up profiles that could be a match. Other users can then up-vote or down-vote the matches, leading to more accurate pairings. 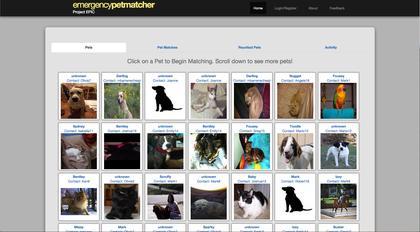 The site is largely based on pictures, which co-creator Mario Barrenechea said makes it easy to use. White, Barrenechea and fellow researcher Joshua Barron hope EmergencyPetMatcher can be deployed globally, since people of all ages and nationalities can easily navigate the image-heavy interface. In addition, the site also offers options for livestock and non-traditional pets, which could come in handy locally.

“Colorado has seen more than its fair share of disasters,” White said. “While we know what to do for wildfires, the floods really hit us hard [in 2013]. The need was different.”

EmergencyPetMatcher and its CU parent lab, Project EPIC (Empowering the Public with Information in Crisis) look at addressing that need through social media. Barrenechea and White said digital volunteers already use sites like Facebook during disasters, and the team’s work streamlines those efforts.

“It’s not that we’re looking forward to a disaster,” White said. “But it’s the nature of the world that those things happen. The best thing is to be prepared.”