It’s a safe bet that Boulder-based journalist Hannah Nordhaus has a better campfire ghost story than you do. Her tale involves a spirit that has alternately haunted and amused her skeptical family for generations. “Her name was Julia Schuster Staab,” Nordhaus writes in her riveting new book American Ghost: The True Story of a Family’s Haunted Past (Harper, 336 pages, $25.99). “Her life spanned the second half of the nineteenth century, and her death came too soon. She is Santa Fe’s most famous ghost. She is also my great-great-grandmother.” 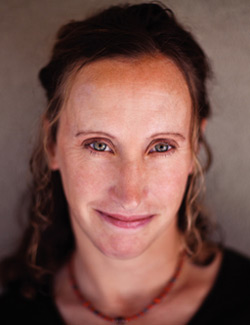 Nordhaus makes for an engaging narrator in part because she is a reluctant and good-humored ghost hunter. As a journalist and author of the nonfiction narrative The Beekeeper’s Lament, facts have always been her friends. Still, she can’t resist the pull of family lore about Abraham Staab, her paternal great-great-grandfather who moved from Germany to Santa Fe in 1858 and established a dry goods wholesale business. A shrewd businessman, he amassed a fortune, became one of New Mexico’s elite, and built a three-story brick mansion near Santa Fe’s Plaza in 1882.

Compared to Abraham’s conspicuous public presence, his wife Julia, also an immigrant German Jew, passed a quieter existence—at least while she was alive. “She was an adjunct and helpmeet to her husband, cloistered and Victorian, a creature both of her waning epoch and her own reticent and melancholy constitution,” Nordhaus writes. “Were it not for the stories they tell of her ghost, we’d know nothing about her life at all.”

Beginning in 1979, people began to report supernatural experiences at the old Staab mansion, which is now a popular hotel, La Posada. Psychics, historians, journalists, fiction writers, and TV producers for both Unsolved Mysteries and Ghost Hunters swooped in to tell her story, employing various levels of factual accuracy and histrionic embellishment.

Was Julia’s death in 1896 at age 52 attributable to her grief over the loss of her eighth child? Did her hair turn instantly white? Did she go insane? Did Abraham confine her to her room or otherwise mistreat her as some of the accounts suggest? Nordhaus determines to separate fact from speculation in an investigation that takes her from New Mexico to Germany and back again.

“The dead hold secrets that we can never know—and in that respect, ghost hunting and ancestor hunting are not so far apart,” Nordhaus writes. “They both involve sifting through heaps of supposition, extrapolation, and unmoored clues interspersed with brief, infinitesimal wisps of evidence.”

Nordhaus structures American Ghost for maximum suspense, building up to reveal what she sees the night she spends in Julia’s room at La Posada. She alternates chapters in which she details painstaking research through historical archives, German cemeteries, family sources, and her own DNA, with accounts of consultations with psychics, ghost hunters, and mediums whom she probes with questions that the available facts can’t answer. Nordhaus follows her research wherever it leads her—including a hilarious experience on a ghost tour at the Stanley Hotel.

When she delves into the history of hardships faced by Western pioneer women and discovers Julia’s sister perished in the Holocaust, the story becomes incredibly moving.

For anyone who loved reading Time-Life Mysteries of the Unknown books as a kid before setting them aside in favor of the triple fact-checked reporting of The New Yorker, American Ghost is a treat that appeals to both the mystery-craving and truth-loving parts of the brain. Written with heart, sensitivity, and intelligence, it’s a tale well worth toasting with a round of campfire-roasted marshmallows.

Jenny Shank’s novel, The Ringer, won the High Plains Book Award. Her stories, essays, satire and reviews have appeared in The Atlantic, The Guardian, The Washington Post and McSweeney’s. Follow her on Twitter @JennyShank.