RiNo is booming. You can tell from the droves of B-cycle passersby and tattooed 20-somethings on beer tours. And while this neighborhood’s hurried gentrification is obvious, there’s no denying that a plethora of public art has beneficially colored the area in recent years. 5280 wandered the formerly gritty sidewalks of the RiNo micro-hood (located inside what the city dubs as Five Points) to discover the public and street art this area has to offer—plus nearby local businesses to check out.

A whole string of murals decorating the alley that runs north-south between Walnut and Larimer Streets makes for the perfect accompaniment to your morning caffeine-fix from Crema Coffee House. Order a hearty slice of almond cake or quiche—you won’t be disappointed in either—and then grab a latte to go. Peak around the north corner at Crema’s new mural, a January 2015 addition by Denver-based Mike Graves featuring one of his distinctive cartoonish characters. Cross the street and continue halfway down the block into the alley, where vibrant murals from artists like San Francisco-based Daryll Peirce, Chicago-based Jake Merten, and a collaborative mural by Denver artists Mario Zoots, Kevin Hennessy, and Mike Weiss will greet you. 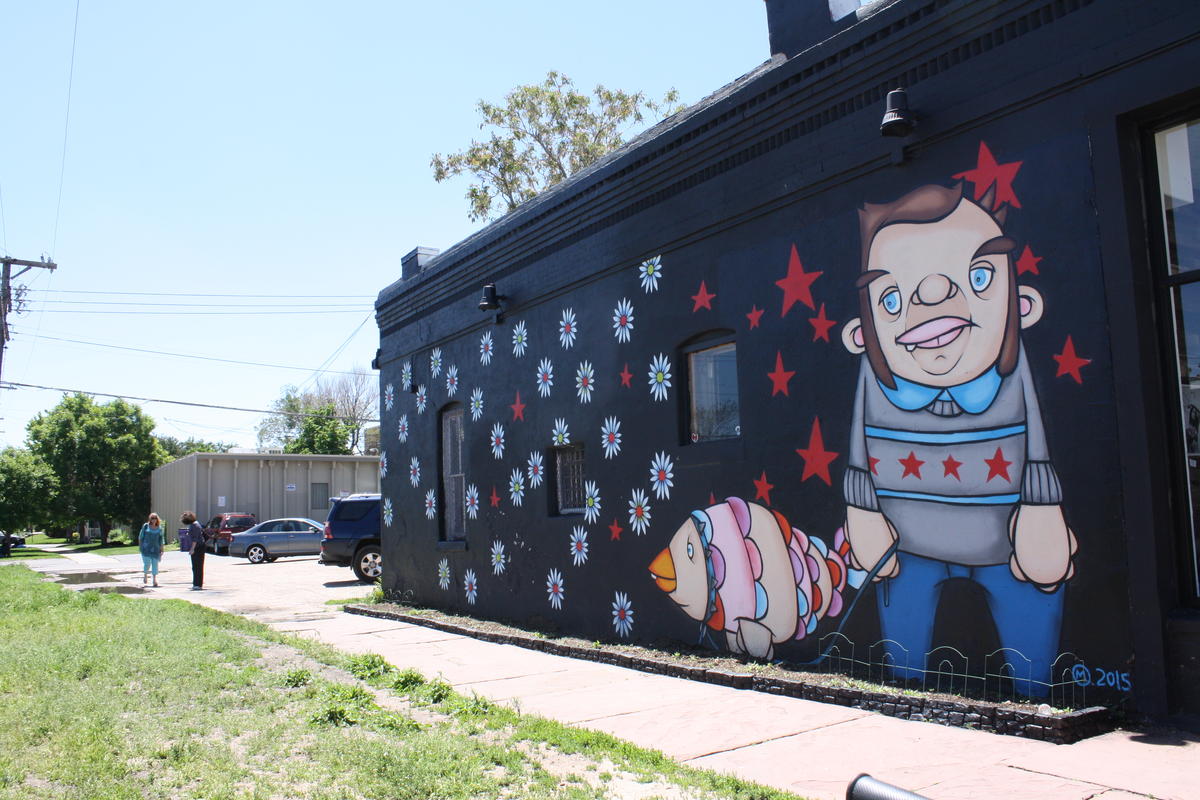 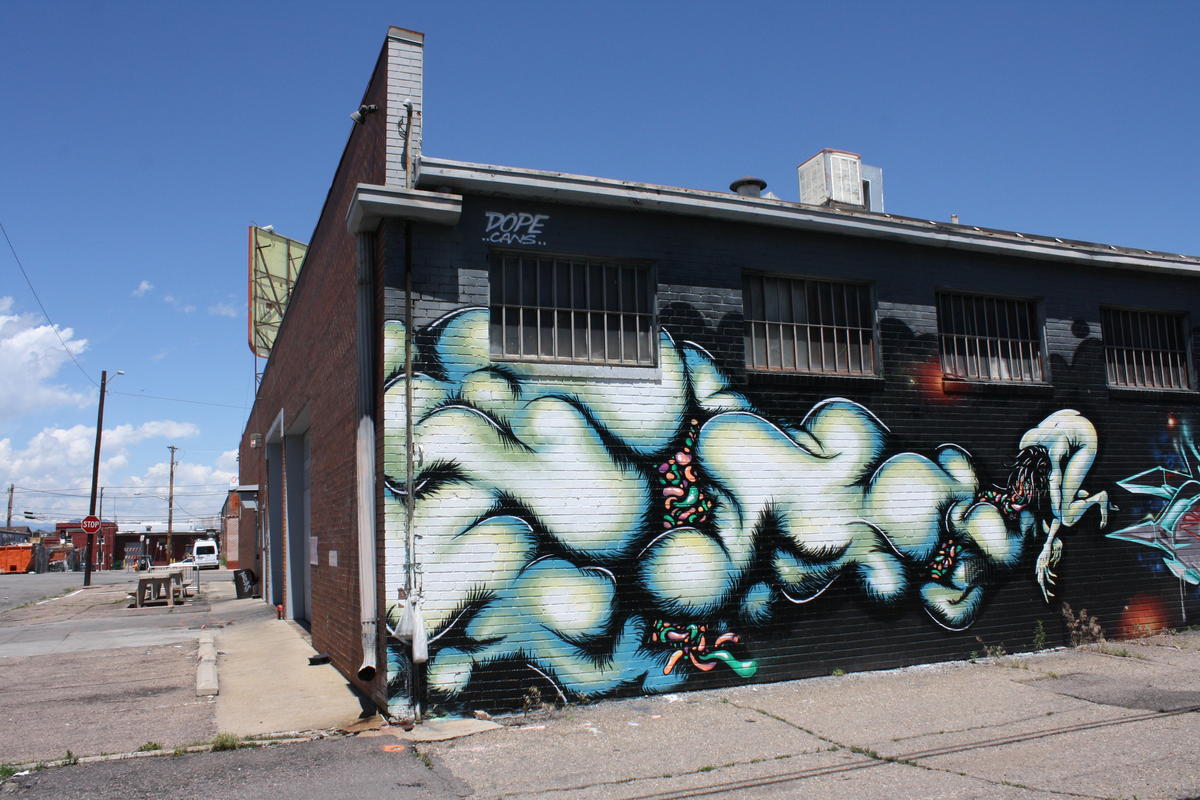 While mots of the artwork popping up in RiNo is increasingly contemporary, Denver stencil artist Amanda Marie’s nostalgic design at 2930 Larimer St. has a healthy dose of wistful charm. Her unique style is heavily influenced by storybook illustrations, allowing her murals to tow the line between comforting and spooky. This 2014 piece on the front of video production company Futuristic Films features ghosts, dairy trucks, flying children, and even two little girls riding a wolf. Find a real throwback on the garage door of the Empire building at 2936 Larimer St., where street artists David Choe, Flores, Kreig, and DSTRBO painted this whimsical collaboration in 2008. Stop by Ratio Beerworks, which joined the neighborhood in February 2015, for a post-art-appreciation of “Dear You” French Saison. Enjoy the dry and earthy brew on the patio of this open and airy brewery. 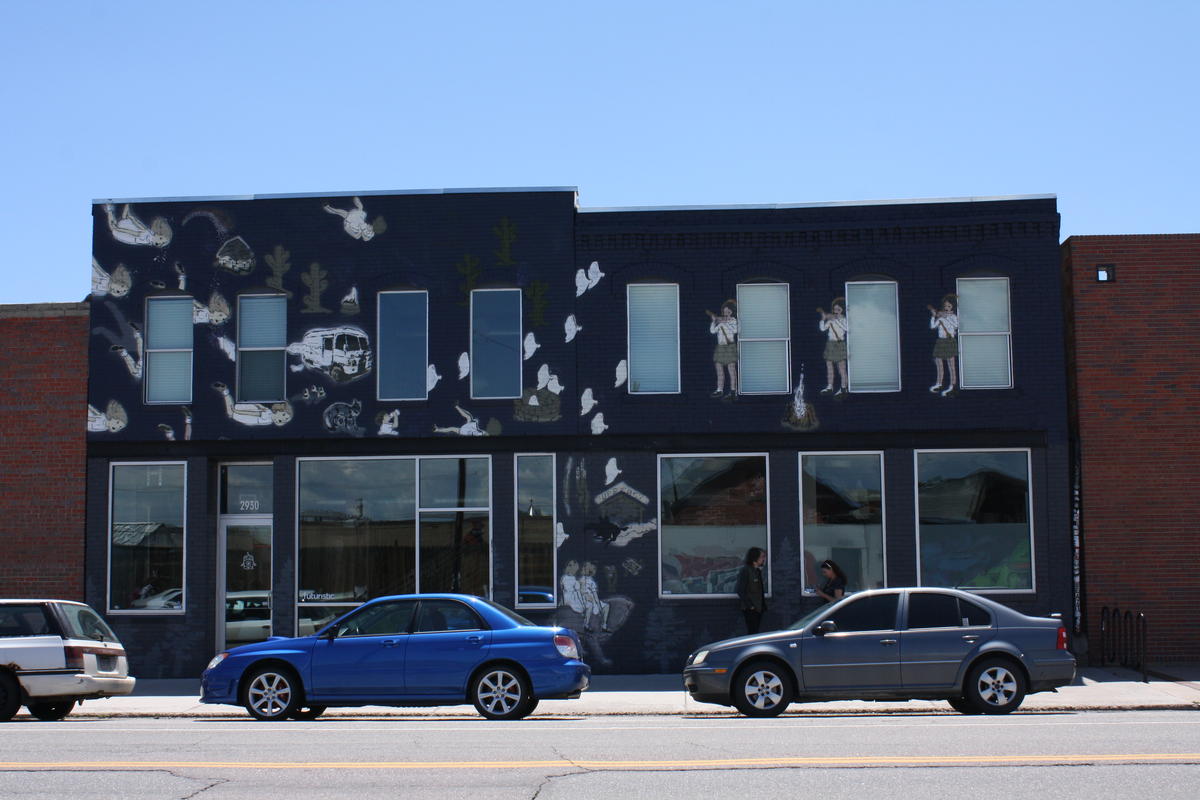 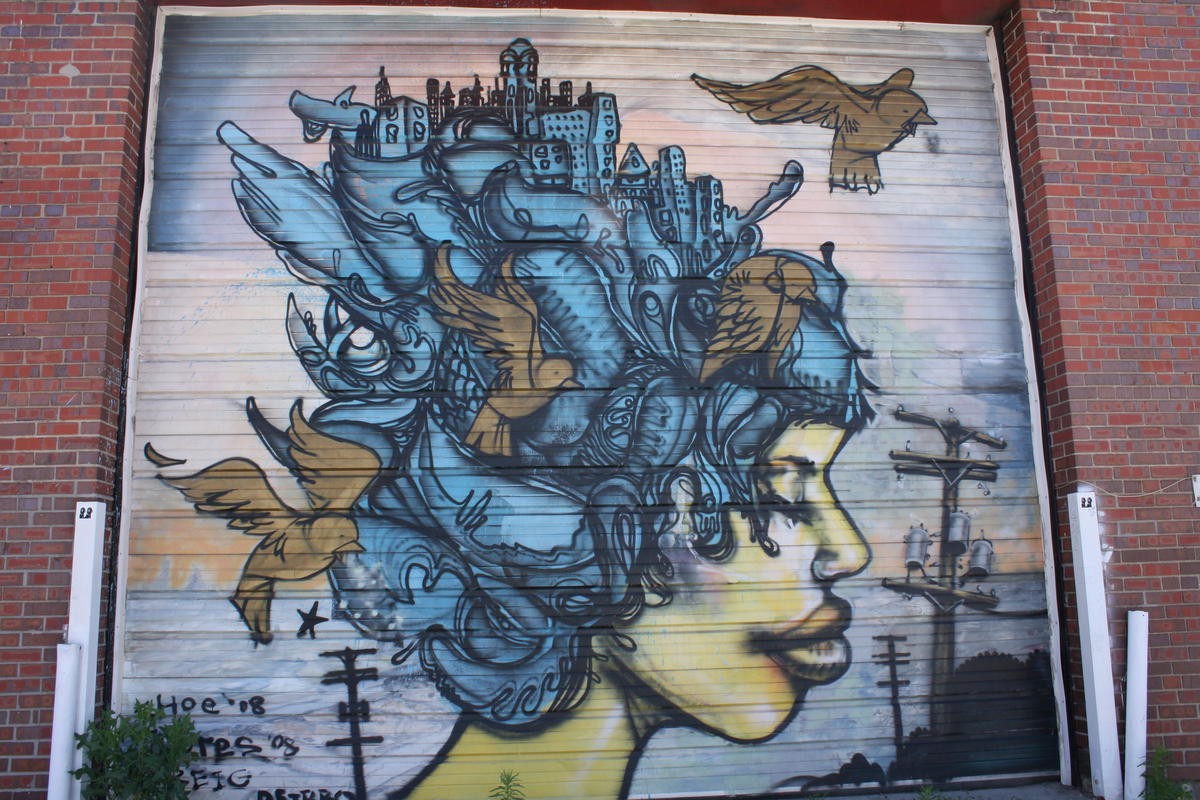 As a portion of Five Points, it only makes sense that RiNo would have a jazz club to harken back to the neighborhood’s historical status as a jazz hub. Nocturne Jazz & Supper Club, which added its jazz-era glamour to RiNo in March 2015, makes its presence known with a mural depicting jazz greats Lee Morgan, Max Roach, and Thelonius Monk. In close proximity to the aforementioned alley near Crema, this spot is surrounded by street art, including a standout piece by Argentinian artist Mariano Padilla. Padilla also painted the IMAC building (check it out here) on the corner of Larimer and 26th streets.

(Check out five reasons to visit Nocturne, including their awesome happy hour.) 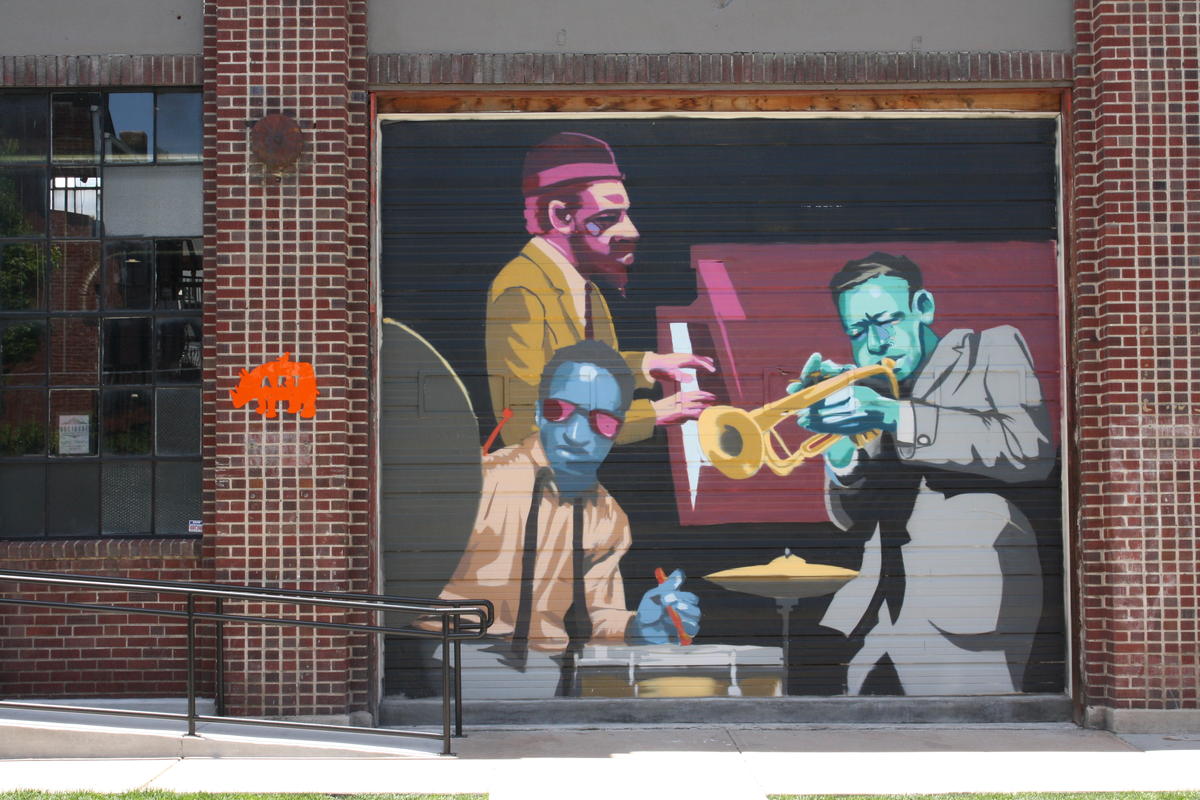 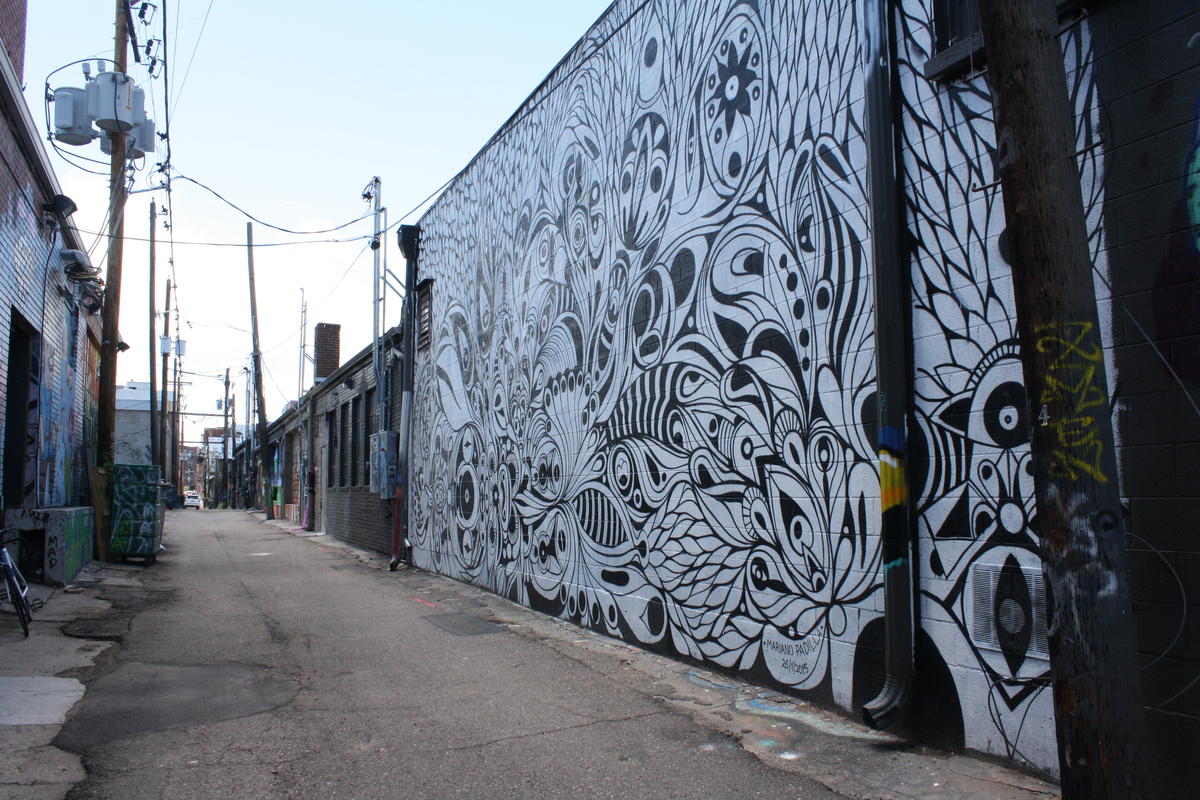 Head to Topo Designs by way of Larimer Street and check out Jeremy Burns’ “Larimer Boy and Girl,” which was completed earlier this year. This innovative mural uses the protruding vertical slats of a former warehouse to create an image that is only visible from the certain angles. When walking north, you’ll be greeted by the wide-eyed face of a girl, and when going south you’ll see the friendly face of a boy. And if you like sleek and colorful outdoor design, you’ll be a fan of Topo’s Colorado-made gear. 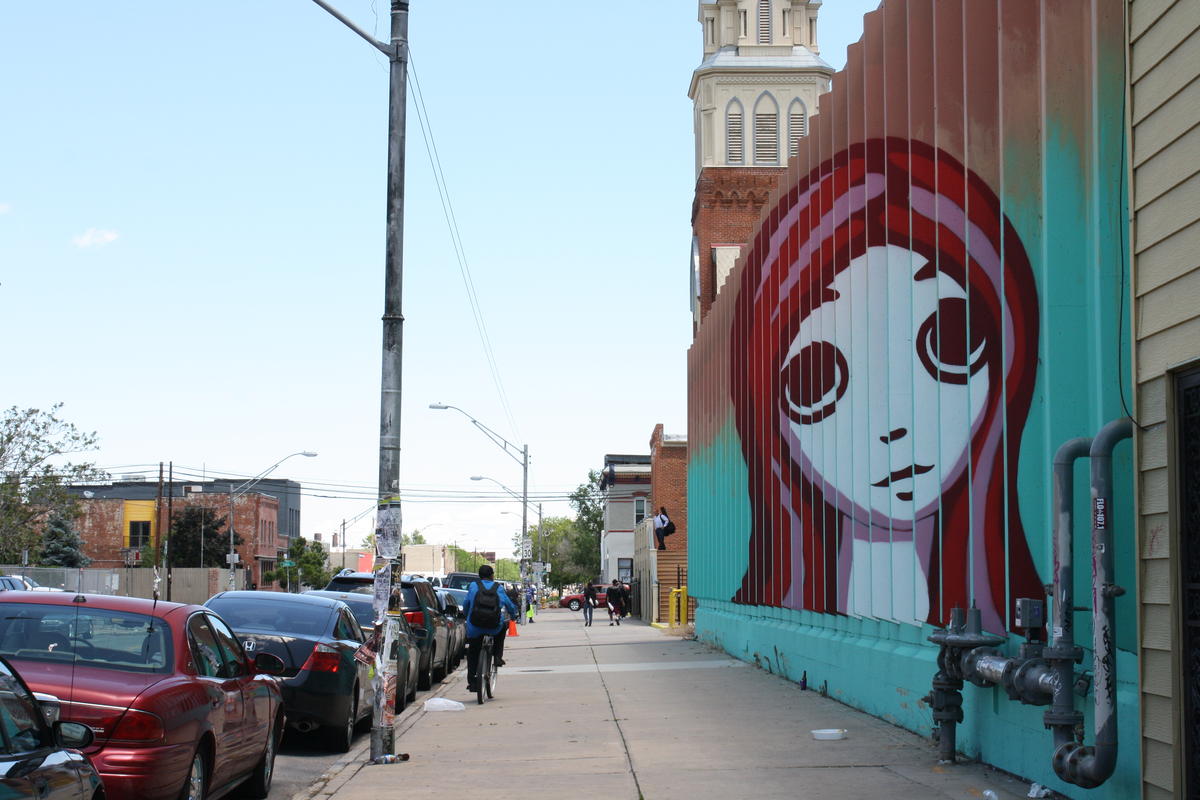 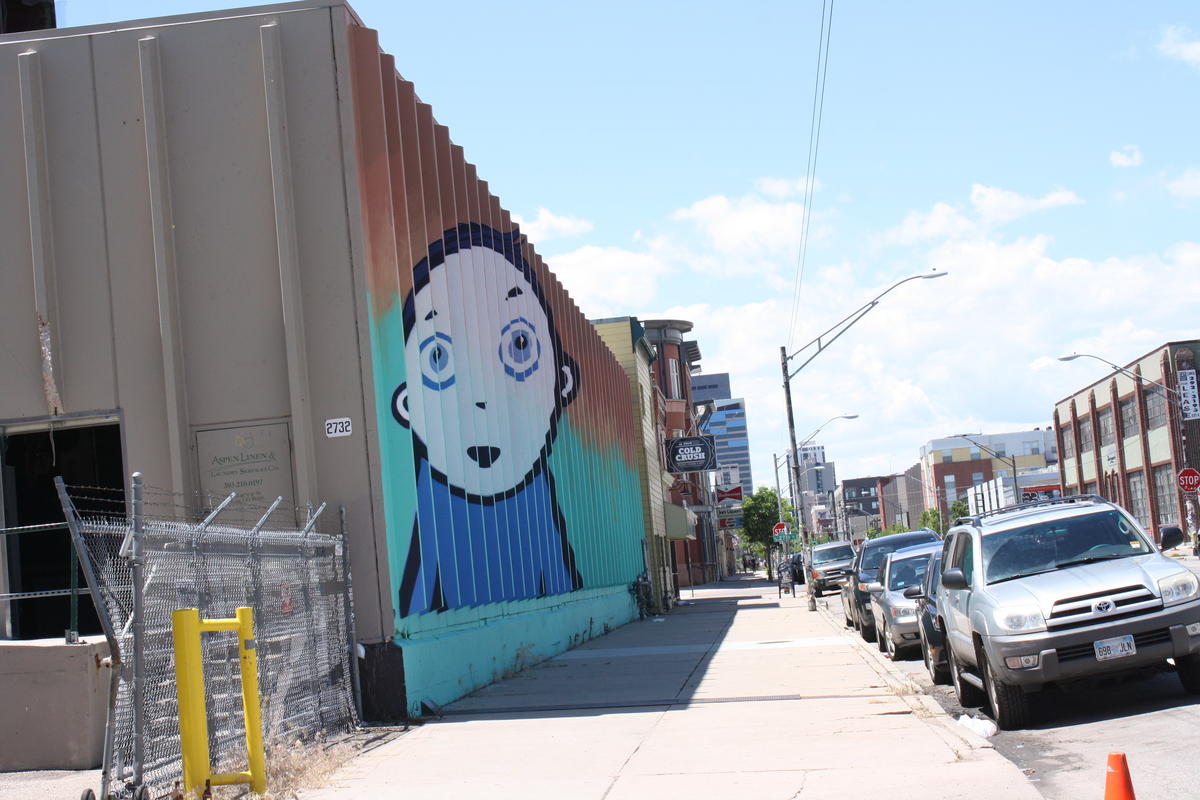 “Trade Deficit” by Joe Riche has been in the neighborhood since October 2009. This three-part sculpture made of old shipping containers nods to RiNo’s industrial past and seemingly bright future. Walk up the street to Biju’s Little Curry Shop at 1441 26th St. and grab a bowl of delicious made-to-order coconut curry chicken, which isn’t complete without the fluffy, melt-in-your-mouth chapati bread. Sit on the patio and keep an eye on Riche’s sculpture while you eat your sizeable bowl of flavorful curry. 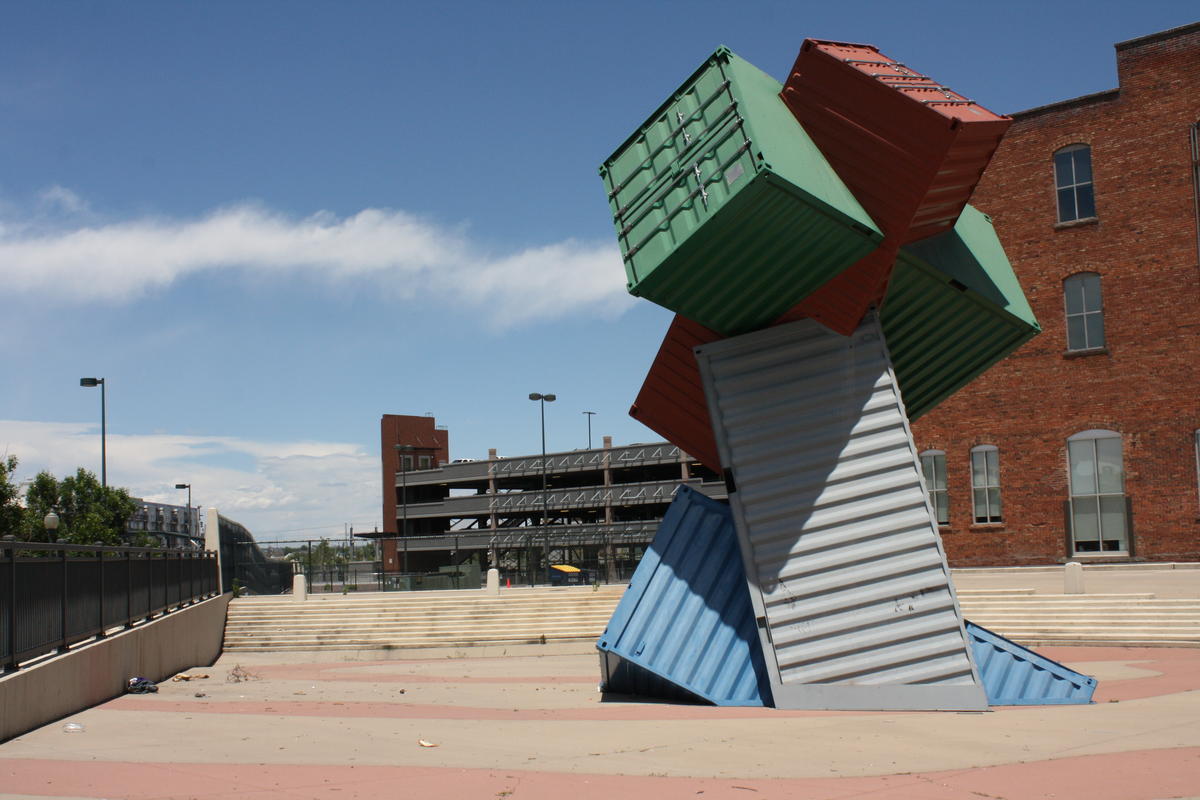 Covered from sidewalk to roof in murals by local artists, Dada Art Bar is deeply rooted in the local art scene. Grab a seat at the bar or in a booth and order the suitably name RyeNo house cocktail with Bulleit Rye, Domaine Canton, pressed Lemon, sage, and honey-ginger juice. 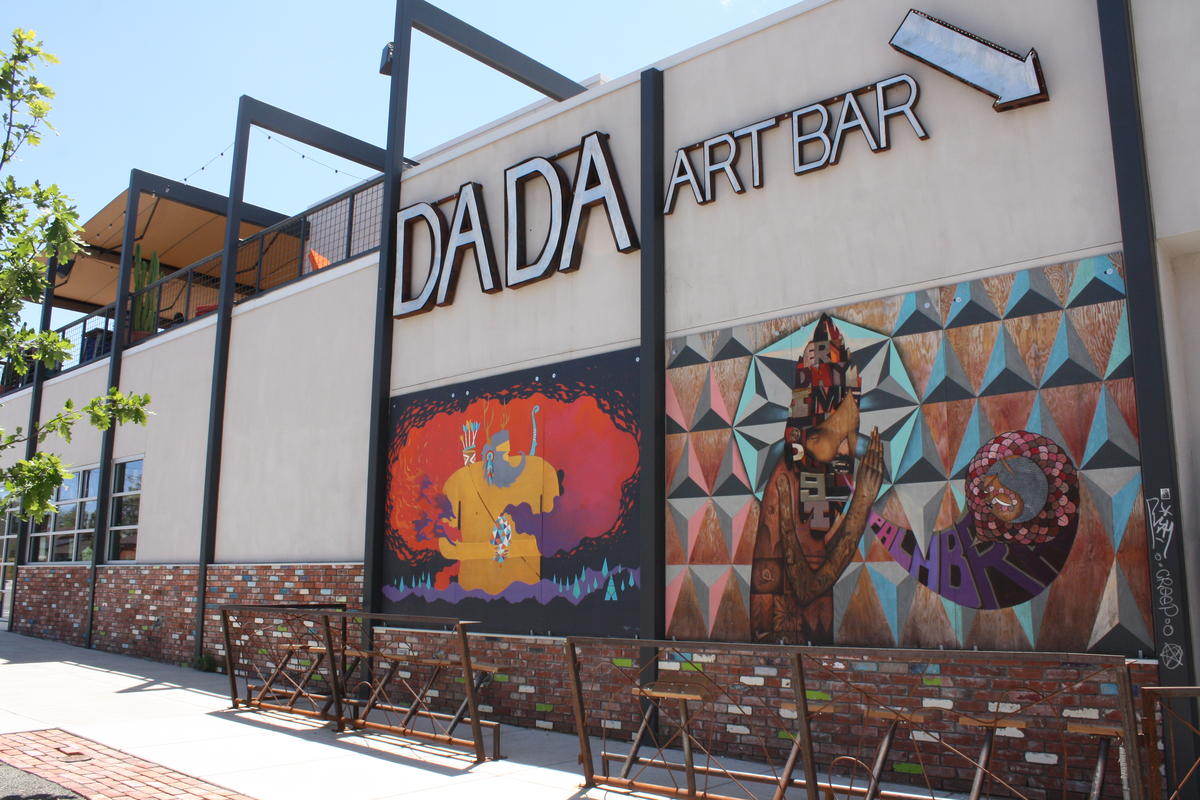 While you’re in the neighborhood: Don’t forget to head down Brighton Boulevard to Svper Ordinary at the Source and other galleries in the area including Plinth Gallery and MidMod furniture gallery.