March 30 — I wake up to a continuous vibrating of my phone. When the phone rings that much I know something has happened in the trial or case.

I turn on the computer. Arlene Holmes, the mother of the Aurora theater shooting defendant, has written a book, When the Focus Shifts: The Prayer Book of Arlene Holmes 2013–2014—less than a month before the start of the impending trial.

Arlene and her husband, Robert, have frequently attended the court proceedings. Now, once again, they are having their say in their own way. “My son never harmed anyone,” she wrote in an entry titled “Memories,” dated March 22, 2013. “He never committed a criminal act. He never stole anything. He was not interested in drugs. He did not gamble or stay out late. He loved animals and children. He was responsible. People think he is a monster, but he has a disease that changed his brain.”

I pause and pray. The more I read, the more I am overcome with emotion. She wrote, “I was shaking, overcome. Kept praying; made it through the list. Please, victims, please, feel my prayers. I pray for you by name.”

I see a glimpse of her obvious pain and her attempt to save her son’s life.

About her son, she wrote, “Funny and intelligent kid, hopeful; a future ahead. Adolescence. University. Far away from home. Violence. What the hell happened?”

I walk into the bedroom to talk to my wife. “She’s operating out of a mother’s love, and I understand that,” I tell Megan. “But does her son’s life matter more than my friend Rebecca’s? More than the 11 others who died, or my friend Ashley, who will never walk again, or erase the sound of the AR-15 from our memories?” The most insulting part, of course, is the timing.

I can only speak for myself, but it doesn’t make sense that she would write a book in which she says that she prays for the victims. We’re all in court together, and she has never, to my knowledge, spoken directly to any of us (not that I ever expected her to). I have never received an email or a phone call. Her book speaks to a larger audience.

Should I be more sympathetic, or is it OK to feel angry? Is it OK to wonder if this is just an attempt to sway public opinion? The shooter, her son, could face death row if found guilty. She wrote, “If you think they deserve death, you are wrong. It could have been your child. It just wasn’t.”

At work, I head upstairs to talk to my friend Pierce O’Farrill, who was also shot in the theater. He is conflicted, too. We lean on each other and our faith. As I leave his office we both agree we will be glad when this is over. 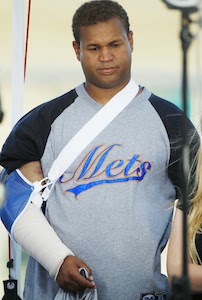 We can operate in a place of forgiveness, which is the route that I and others, including Pierce, have decided to take, but today I am uncertain. How could she state these things? She wasn’t there watching her son through a crack between the seats.

She keeps saying how her son is not a monster (a word I have never used to describe him), but a monster is a strange or horrible imaginary creature, something that is extremely or unusually large, or a powerful person or thing that cannot be controlled and that causes many problems. The latter may be true.

The choice is not hers to make. I believe he knew what he was doing, but it really doesn’t matter what I think, what she thinks, or what the media thinks. It’s up to the jury of 12 who have the difficult task of hearing story after story about this senseless tragedy. They will be forever changed, just like us.

April 26 — I exhausted myself this past week with work, media calls, and thinking about the trial, which starts tomorrow—my son Mitchell’s birthday.

I had to visit and talk with my support team daily. I knew this time would be difficult. I prepared. But every minute, day and night, of this week has been filled with thoughts of the trial and what it will be like to take the stand (I testify in three days) and look the shooter face-to-face, eye-to-eye, after all this time. The circus is getting the best of me.

It’s too much. My anxiety is increasing. I am short with folks—not my usual style. (I apologize a lot.) It’s natural, I keep saying.

I had my final pre-trial visits during the week. I suddenly recognized how real this whole thing is. My plan is to attend the first three days: opening statements, support my longtime friend Kaylan Bailey (she was 13 at the time of the shooting and lost her cousin in the theater), and then my day to testify.

I started talking to Pierce O’Farrill more each day last week at work. We kept reminding each other that all people can change no matter what they may have done. I truly believe that. So why should the shooter be any different, I think to myself. I’m questioning my faith and belief system.

Whatever the shooter’s fate, I have to keep reminding myself who is really in control; it is His will, not mine. I need to take it easy and not make things bigger than what they really are.

There are consequences for every action. The shooter will have to face his just like we all do. My lawyer reminded me that I just need to get through this. I have to play my part and then I can move on—and forward—to the better things in life like my new house and a baby weeks away from delivery.