April 27 — Today the trial started. I was anxious, bugging my wife to help me find my sweater, my phone. As we drove up I-25, I tried to slow things down in my head. We arrived at the Arapahoe County Courthouse to a sea of reporters and cameras; we walked by them. Security was very tight. The overflow area, filled with victims and survivors, was packed. We waited and waited. 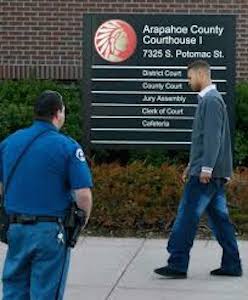 I knew it would be emotional, and it was. I laid my head on my wife’s shoulder for a while, taking it all in. The families of most of the 12 who were killed and those injured were there. Some decided to skip the opening statements. I understood.

We watched on closed-circuit television as the District Attorney’s office began with its opening statement. One of the first victims mentioned was my friend Rebecca Wingo. I started to cry. I felt overwhelmed as the DA outlined the prosecution’s argument, painting a picture of a man that orchestrated a malicious crime over a period of months. Photos. The video of him walking through the lobby of the theater. The notebook. I prepared as much as I could for this day, but I could not stop crying as pictures and footage of the dead were shown. Names I will never forget. It is so painful. I have never felt so hurt.

After a break, the defense team began making its opening argument for why the defendant should be found not guilty by reason of insanity. They didn’t admit any responsibility. The focus was on a hereditary line of depression and schizophrenia. The defense, of course, will have experts that can present a different picture of the shooter.

I was outraged. In my opinion, this is not the work of someone who is insane. Once the witnesses start telling their stories of what happened, and the experts and first responders speak, and the jury hears all the evidence from both sides, the world will see what we already know: He is guilty. A life sentence would be a slap on the wrist for the shooter. Shooting at an unarmed crowd is a cowardly act.

I lay awake that night and think about it all. 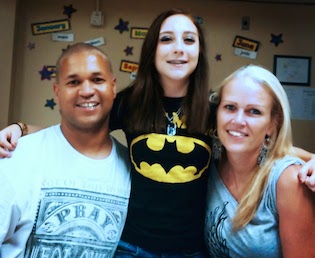 April 28 — I return to the courthouse to support my friend Kaylan Bailey (pictured, right center, with Marcus and his wife), who is testifying today.

Kaylan and I met six years ago at Church in the City. Her grandmother was one of the cooks, and we served food to the guests, mainly homeless individuals. Kaylan was always so happy and made me laugh.

After the tragedy, when the theater reopened, Kaylan wasn’t going to go, and I was having second thoughts, too. I called her and told her if she went, I would too, so we did. I was a wreck. As Megan and I passed the free snack bar, this little girl with a huge smile on her face was waiting with her mom at the door of the newly remolded theater H. Kaylan gave me the sweetest, longest hug and we sat by each other. I sat in what would have been the same seat I last saw Rebecca. I even wore my purple Rebecca shirt that was handed out at her funeral. It was my way of saying goodbye. I have not worn it since.

With Megan on my left and Kaylan on my right, we heard from several state officials and dignitaries, including Aurora Mayor Steve Hogan. He said something that stuck with me: Although something tragic happened here, the rebuilding of the theater was a sign that we are healing and moving forward. He was correct. I felt closure and a sense of peace.

Back in court, it is incredibly difficult listening to the 911 tape of Kaylan trying to perform CPR on her cousin in an attempt to save her and the thunderous noise of the gunshots blasting in the background as the 911 operator tries to help. I will never know her pain, or that of her family, but I wanted to be there to support all of them. I remember seeing her on July 20, two to three rows up from me, giggling and having fun.

The prosecution called her name. I sat in the back. The thing that stuck out the most was the courage of this teenager (now 16). It was amazing to see her be so brave and retell such a tragic story. She had to listen to the tape and see pictures of her cousin, Veronica Moser, again. She had to show where she sat and what happened detail for detail. It’s a process I will have to go through tomorrow.