In a time of choose-your-own-adventure music (think: Spotify’s shuffle option or Pandora’s next button), people are constantly hopping from one song or genre to the next. The four guys behind Denver-based Amzy see that as a coup for musicians: “Why limit yourself?” asks frontman Brennan Johnson. Where he has a predilection for modern electronic, lead guitarist Sean Grant skews rootsy blues and rock ‘n’ roll. “We like to put that in our music,” Johnson says. “It’s one cohesive thing but a world of styles.”

Fans dig it. The foursome won 93.3’s Hometown for the Holidays 2014, a launching pad for new local artists. In January, Amzy debuted its five-song EP, We Don’t Walk… We Dance, at a sold-out release party. Then they headed to South by Southwest for three gigs. On Friday, August 14, the band plays its first headlining show in Colorado.

After years of trying to find their sound—Johnson, Grant, and bassist Nick Billings have playing together in various formations since high school—they finally landed on something they thought was special in 2013. (Drummer Wes Barton came on board in 2014.) “Time to Change,” the band’s first single, won the 93.3 Demo Derby Finale in June 2014. “That was the catalyst that we should keep going,” Melbourne-born Johnson says. 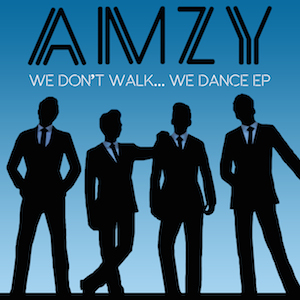 Amzy brings an upbeat, flowing energy to Colorado’s music scene. The twentysomethings have a breeziness that’s reminscent of Walk the Moon, and their synth-infused pop sound is easy listening backed up by skilled musicianship. Johnson and Grant’s song inspiration can truly be found anywhere, from overcoming obstacles (“Feet on the Ground”) to what was going on in Cinderella’s head five minutes before her carriage turned back into a pumpkin (“5 to Midnight”). Now that they’ve achieved some recognition for their work, the guys are dedicated to staying on Denver’s radar. “We have to prove it now to Denver’s music scene that we’re worthy,” Grant says.

One person who’s sure to believe it: Grant’s mom. In high school, they soundproofed a shed at Grant’s house so they could practice until 2 or 3 a.m. Not surprisingly, Grant’s mom, Amzie, would tell them to quiet down. Their response: “How about if ever make a band, we’ll name it after you?” Says Johnson: “She’s still our biggest fan.”

The band isn’t signed to a record label yet, and they don’t have immediate plans to release a full CD or second EP. Instead, they’re focusing on putting on a rousing live show (for which they always wear full suits). See for yourself next week.