Even on a superficial level, local jam band Leftover Salmon and Breckenridge Brewery have a lot in common: They both came of age in popular Colorado towns (Boulder and Breckenridge, respectively), tend to be associated with good—often rowdy—memories, and have evolved cultural norms (Leftover, when it came to bluegrass, and Breckenridge when it came to beer). Each has grown in different ways, however, with Leftover’s rise to fame waning after the death of original banjoist Mark Vann, and Breckenridge’s growing steadily, pioneering the craft beer industry, expanding distribution to 32 states, and eventually moving its headquarters west—first to Denver, and then to their elaborate Farm House in Littleton.

This month, the brewery and the band came together to release a collaborative beer, the Silver Salmon India Pale Lager, and a new album, 25. Buy a 22-ounce bomber of the brew, and you get a download of the album, which features 25 never-been-released live recordings, for free. The cross-promotional move resembles an earlier partnership between the pair, three years ago, when Leftover wrote four original songs for the brewery and download codes were distributed on the back of Breckenridge Brewery-branded coasters. But the first time the brewery and the band worked together was Mother’s Day 2012. Todd Thibault, Breckenridge’s culture czar, remembers being approached by Leftover’s manager John Joy to do an event—a street concert with librations—and thinking he’d lost his mind.

“It was three weeks out and I never thought he’d get a liquor license,” says Thibault, “but sure enough, he pulled it off. We rolled a beer truck in there and I think we ended up sending about 80 kegs of beer that day. The crowd impressed the hell out of me, and it was certainly our genre of music, being a bluegrass-esque band with drums.”

It was the beginning of a beer-laced friendship. Growing up in Colorado, Thibault had heard of Leftover Salmon, but so had Andy Thorn, who was living in North Carolina. Thorn joined the band as a banjoist in 2010, after pickin’ around the Colorado scene, most notably with mutli-instrumentalist Drew Emmitt in the Emmitt-Nershi band. Emmitt, along with fellow frontman Vince Herman, are the only original members of Leftover Salmon who remain in the band. “We have our drummer Alwyn Robinson, who was a student at University of Colorado Boulder when we met him, and he’s just incredible,” says Thorn, “And Greg Garrison, who’s a bass professor at Denver University. He’s the rock that holds us all down so we can do our crazy thing in the front.” 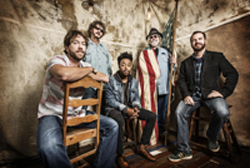 Today, Leftover Salmon is as good, if not better, than its ever been: Herman remains one of the best showmen in the business, while Emmitt’s musical prowess is matched only by a select few. For the past couple of years, Little Feat’s Bill Payne has been sporadically sitting in on the keys, a stellar addition that—despite Payne’s joining the Doobie Brothers—isn’t going anywhere. Upcoming tour dates for this year include a two night run at the Boulder Theater this week, a festival in Mexico, where Herman is planning to tie the knot, and Colorado’s preeminent string and ski festival, WinterWonderGrass, in Avon. The flavorful yet light Silver Salmon IPL is the perfect accompaniment; its meant to be a session beer, appropriate for sipping or pounding.

“We all got together and talked about a beer,” says Thibault, noting the band’s input. “We wanted something special—we wanted something flavorful, but not too crazy where you could still hang out, listen to music all day long, and drink that beer.” A cross between an IPA and a traditional lager, the beer is hoppy, light, and relatively low in alcohol content. According to Thorn, “We wanted a festival beer you could enjoy drinking. It’s pretty different, and very good.”

The taste augments Leftover Salmon’s unique genre of music, known as polyethnic Cajun slamgrass, a mix of zydeco, rock and roll, and bluegrass. Drinking the bomber and listening to 25—ideally after a day skiing Eldora—is quintessentially Colorado. For Thibault, collaboration is the Rocky Mountain way. When he started at Breckenridge Brewery 23 years ago, Thibault remembers working together with other breweries, sharing bottles and ingredients. Leftover Salmon is the product of different musicians wandering through the state, meeting each other, jamming, and revolving in and out of the band. When they play the Boulder Theater on Thanksgiving—an official album release of sorts for 25—Breckenridge Brewery will be on hand to quench the crowd’s thirst. Good times seem iminent, but leftover Silver Salmon IPL? Doubtful.