Paige Schuster has always been devoted to giving back, thanks largely to the examples her parents instilled. When her father died in a small plane crash near Fort Collins in 2004, the personal tragedy only strengthened her altruistic impulses.

To honor her late father, Schuster and her mother created the Schuster Family Foundation (SFF) when she was 17 years old. For many years, the small foundation’s primary goal was to “give back to organizations that my mom and I felt were near and dear to our hearts,” Schuster says.

SFF floated modestly along as Schuster attended the University of Denver. While there she met her future husband, Marcus Christianson, and the two connected over their shared love of sports—he was a swimmer, she was a gymnast—and of science. After graduating, they both became high school science teachers in the Cherry Creek School District.

Even though they had entered the profession with a shared desire to do some good and build up future generations of students—“the same reasons anyone goes into teaching”—within a few years they were equally burned out by the politics of the profession and its constantly changing rules. Like so many young Coloradans, they’d gotten into home brewing, with their academic backgrounds making it more sophisticated than a casual hobby. “We both like the science side of it,” Schuster says. “We’d go to local breweries, find beers we liked, then try to replicate them at home.”

They quickly realized that starting their own brewery was actually doable during the craft beer boom. They also agreed that in addition to making it a successful business, they wanted it to be a for-profit enterprise that gave something back to their community. The plan was to donate about 20 percent of their profits to the SFF, which would then distribute grants to Colorado-based organizations.

It was during Schuster’s yearlong battle with insomnia that inspiration struck. Both were still teaching while trying to get the new business going, and she found that she kept waking up at the same time. “Every. Single. Night, for about a year,” her eyes would pop open to see her bedside clock showing 2:22 a.m.

She concluded that it must be a sign, and Two22 Brew had its name. Since opening in 2014—on 2/22, naturally—the Aurora-area business has given $2.22 for every $10 in profits to the SFF. (The brewery’s address is technically in Centennial, but it’s bordered on three sides by Aurora.) “We opened it for obvious reasons; brewing beer in Colorado is the thing to do,” Schuster says. “But we also knew our area and the industry are full of people who want to give back to the community, so we decided to take it to the next level and use the profits as a way to grow the foundation.” 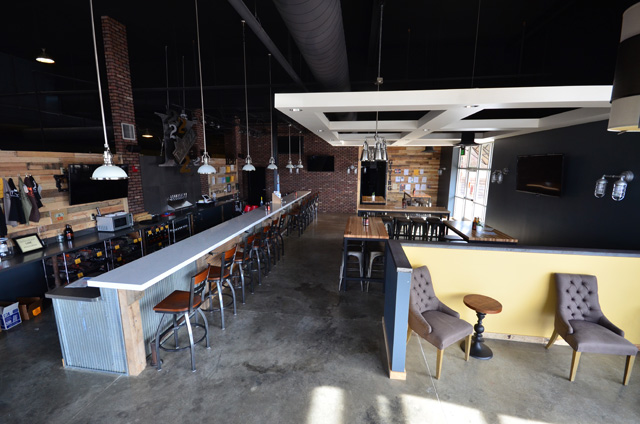 Today the brewery, which seats about 65 patrons and holds about 100, has 10 beers on tap (five regular flavors and five rotating brews), and hosts food trucks in its strip-mall parking lot six days a week. The bar hosts a trivia night on Tuesdays, welcomes a run club on Thursdays, and throws watching parties for Broncos’ games. Two22 even has yoga classes every other Sunday. Schuster and Christianson are holding off on bottling or canning their beers for now, but they have keg accounts at a handful of area restaurants, including Ernie’s Bar and Pizza in Sunnyside and First Draft Taproom in Five Points.

Among the many nominations Two22 received from 5280 readers for this year’s Do-Gooder Award—created to recognize extraordinary individuals and organizations making a difference in the community—one summed up the brewery’s business model as the perfect marriage of small business dedication and community-focused altruism, one that patrons can support by simply walking in the door and ordering a beer. “[Two22’s] ambiance is attractive, but the philanthropic spirit in the air makes all patrons want to be part of something bigger,” one recommender wrote. “I never thought my love for good craft beer would in turn be used for so much bigger good.”

Although Two22, still less than two years old, isn’t yet giving huge sums of money to the SFF, the foundation’s profile is growing along with the beer business: After years of getting 10 or 15 grant applications per year, in 2015 the SFF received 28. “And we finally have a mission statement,” Schuster says. “We support Colorado-based groups that focus on education, the environment, or whole-person/well-being development.”

Meanwhile, Two22’s mission is to keep growing so it can keep giving. “We’re in a unique geographic area because we’re east enough”—near E-470 and Quincy Avenue—“that there are no other breweries within four miles of us,” Schuster says. “We’re a destination brewery, so we miss the brewery-tour crowds, but it’s cool that people go a little out of their way to visit us. We have a close-knit group of regulars and staff, so everyone really gets to know each other and get that feeling of community. We want to be the neighborhood place.”

5280‘s 2015 Do-Gooder contest has ended, but you can still tell us about local individuals and organizations making a difference. Fill out our nomination form here.