Ever scoped your climbing gym for a potential date? Hoped to meet a woman in your yoga class? Lingered in aisle eight of Whole Foods trying to catch someone’s eye? We’ve all been there: There’s no shame in looking for love in the places you already frequent. Still, most dating sites aren’t geared specifically towards shared interests. OkCupid can dissect your politics and proclivities, Match can note your job and the last book you read—but no one really wants to date themselves. Wouldn’t you rather meet someone who spends their free time doing similar activities? If you’re nodding you’re head “Yes,” and you also happen to be a single, outdoor enthusiast who calls Colorado home, then LuvByrd is the site for you.

LuvByrd’s founder Mike Keshian was living in Crested Butte when he saw a commercial for FarmersOnly.com. This was in 2014, and Keshian was immediately inspired. “I started doing some research, looking for something like Skibumsonly.com or Riverratsonly.com,” he says, noting that it was futile. So he decided to create his own website, but instead of going super niche, he went semi-niche, opting for a dating platform geared towards all lovers of the outdoors.

A self-proclaimed ski bum of eight years, Keshian spent his summers fishing in Alaska and his winters in Crested Butte. His roommate at the time helped him hammer out a solid concept, and before he left for Alaska that summer he tasked a different buddy with building the website. “I didn’t even know what SEO stood for, user acquisition, anything like that,” he laughs. In the end, it didn’t matter: Media outlets covered LuvByrd’s launch, and the user base began to grow. 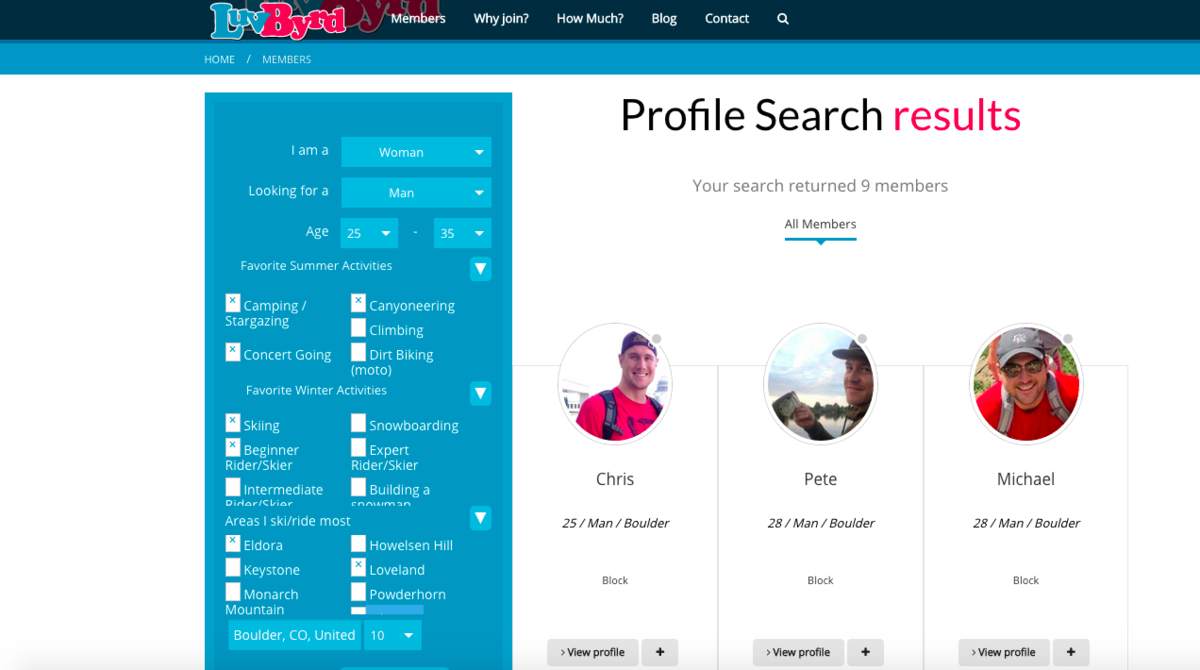 LuvByrd is simple, easy to use, and free. Don’t expect a half-hour long questionnaire dissecting your childhood, your belief system, or where you see yourself in five years. All you need is a photo, a location, and a passion for being outside. Make a profile, limit your search criteria (with things like age range and areas you ski the most), and peruse until you’re ready to meet. The simplicity of the website is part of LuvByrd’s charm: It’s not meant to encourage hours spent online. Instead, it’s about making a date over a shared passion, and then actually executing it in the real world. If you fall in love, that’s great. If not, well, at least you got a good workout in.

Personally, Keshian camps, hikes, and mountain bikes in the summer, and skis the Rockies in the winter. He’s no longer a bachelor and he credits LuvByrd, albeit in a roundabout way, for his good fortune. “Although I was single when I started the site, I didn’t start it because I was single. I started it because I knew there was a need for it,” Keshian explains. “When it launched I invited everyone I knew on Facebook to sign up, and my now girlfriend and I were already friends. So she signed up, I ran into her at an event, and we struck up a conversation about LuvByrd. We’ve been dating since.”

As it expands, LuvByrd’s user base remains Colorado-centric, although Keshian eventually hopes to bring the platform to other cities. Meanwhile, he’s bootstrapping, playing cupid during the day and driving for Uber and Lyft at night. Although there are no exemplary stories thus far—true love takes time, people—Keshian is sure they’re coming. “People have told me they love the idea and have gone on a few dates,” he explains, “But no engagement stories yet.”

As we move into ski season, Keshian is hoping to generate some slopeside love via the website, but also with creative group meet-ups. He’s currently working with Loveland Ski Are to set up an event for the weekend before Valentine’s day. “Think of it as speed dating,” he hints, “only on a chairlift.”