Troy Guard is quite possibly the busiest chef-restaurateur in the metro area. In addition to working on four projects (including two restaurants in Stapleton and a tavern in Highland), he opened a second location of TAG Burger Bar this morning. (The eatery takes over Sunnyside Burger Bar, a concept in which Guard originally consulted on the menu.) And, just hours before that ribbon cutting, Guard walked me through the future Mr. Tuna space. 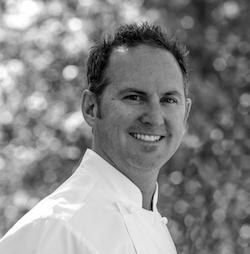 The restaurant, which is slated to open in Industry in June, is named for Guard’s father. “My dad’s nickname was Tuna—he was like a fish in the ocean,” the Hawaiian-born chef says. “Names are special to me, and this is something for him.” The neighborhood-focused eatery, which will have an “American eclectic” menu, takes over a long-ago produce warehouse on Brighton Boulevard. “The trains used to come through and drop off the produce and then trucks would pick everything up at the bays,” Guard says. The 3,500-foot space utilizes four of those large, garage-door bays, which means there is an abundance of natural light and visual interest.

Guard is working with Boss Architecture to transform the raw space into a spot that will toe the line between gritty, hip, and approachable. A wood-fired grill and rotisserie will anchor the open kitchen, and a pickle bar, which will seat four to six, will take the place of Guard’s iconic raw bar. Guard is aiming for a $35 per person check average. For context, that’s about $20 less than TAG and roughly $10 more than Los Chingones.

And, as if that weren’t enough to keep Guard busy, he’s planning on reworking the Lowry location of Bubu. In mid-April the restaurant will close for renovations and reopen May 1 with a new, to-be-determined name and a distinctively Asian menu (think street food like noodles, sushi, dumplings, bao buns, and fried rice). Much of the menu inspiration will come from a March trip to Shanghai and Hong Kong.

Burger Bar Bonus: Through the end of the month, stop by the new TAG Burger Bar (3759 Lipan St.) for a celebratory special: buy a burger and get a beer of the day free.