You don’t have to visit a national park this month in order to celebrate the National Park Service’s 100th birthday—though we’ll jump at any reason to explore Colorado’s great outdoors. (Find some inspiration with our two-minute guide to the Centennial State’s national parks and this national parks road-trip map.) But if you simply can’t make it to the trails, you can still bring them home with you thanks to Longmont-based artist Rob Decker’s National Park Posters Project.

Four years ago, the 57-year-old photographer set out to recreate and reinvent the iconic Work Progress Administration posters of the 1930s and ’40s, depicting all 59 national parks.

Decker, a University of Colorado Boulder grad who got his first camera when he was seven, committed to photography after studying under the legendary Ansel Adams at just 19 years old. (Decker also works in interactive multimedia software, web, and graphic art development.) Since then, he has visited and photographed 40 national parks, some of which he’s revisited in order to capture just the right image. Those original photos are the basis for the reimagined posters—a single scene that evokes each national park—which he digitally manipulates to get an illustrated style, similar to the WPA posters. Then he writes a short description that encompasses the park’s character and offerings.

“Over the years, I have created many great memories with friends and family in some of the most awesome places on the planet,” Decker says. “I think it’s important to draw attention to these places that showcase our country’s rich history, vibrant culture and awe-inspiring landscapes—as ultimately, we need to foster the next generation of national park supporters.” 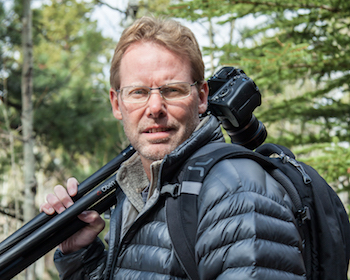 Though Decker hoped to have all 59 posters done by the centennial, only 34 are currently available for sale. (He ran a successful Kickstarter campaign to fund the printing of the next 10 in the series.) “I’m hoping to get close to 50 by the end of the year,” Decker says, adding, “I have every intention of continuing this project.”

He has, however, already managed to produce three versions of Rocky Mountain National Park, his “home park.” A photo series focused on RMNP may be in Decker’s future.

Fans can purchase the 13-by-19-inch national park posters online. They’re printed in Boulder on 100 percent recycled paper using soy-based inks and are available as limited-edition prints ($30), artist proofs ($50), or framed artist proofs ($495). Your new piece of art also benefits the green spaces themselves: Decker donates 10 percent of the proceeds to foundations, conservancies, and associations that support our national parks through education, restoration, and more; past beneficiaries have included the National Park Foundation, Rocky Mountain Conservancy, and Western National Parks Association.