In the early 2000s, Tai Beldock, co-founder and marketing director of Erico Motorsports in RiNo, kept a little red wagon full of paint and brushes in a warehouse across the street. Once a week, she’d wheel it out to cover up the spray-painted tags that had appeared on the exterior of her motorcycle and scooter shop, one of the first retail operations in the neighborhood. Fast-forward to 2019: Beldock recently paid Denverite Casey Kawaguchi to cover the entire side of a building in spray paint.

It’s no coincidence that the rise of the festival now known as CRUSH (Creative Rituals Under Social Harmony) Walls happened during the same time span. When founder Robin Munro, aka Dread, started talking to property owners in RiNo about allowing him to graffiti their walls, “it took a little convincing because the culture was new and pretty taboo still, even 10 years ago,” Dread says. As evidenced by a stroll down Larimer Street today, though, he and Colorado’s cadre of talented street artists and muralists have persuaded them, leading to a greater acceptance of both sanctioned and unsanctioned works. Within a single block, you can find elaborate multistory pieces, literary quotes sprayed onto the sidewalk using stencils, utility boxes covered in stickers, and dumpsters decorated with tags and characters. 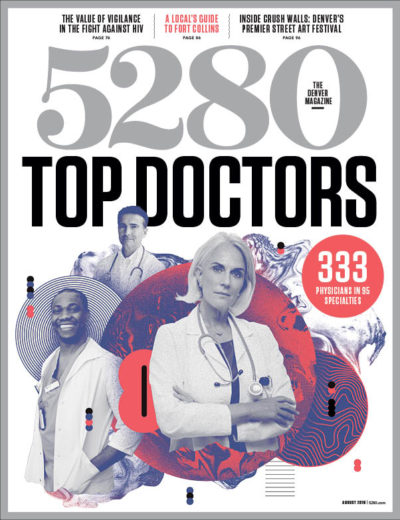 CRUSH’s growth from Dread and a handful of friends putting up graffiti to the 100-some artists who will create works in a variety of media during this year’s weeklong fest, September 2 to 8, hasn’t been without pain. There are debates about whether flashy, Instagram-friendly murals (embraced by the city and developers as a way to deter illegal graffiti) are drivers of gentrification. Those feelings were exacerbated by decisions—like paying big bucks to celebrity artists such as Shepard Fairey while some locals reportedly received much less—made when the RiNo Arts District officially took over 2018’s festival. (This year, under the direction of co-founder and new president Tracy Weil, invited artists will be paired with locals for collaboration pieces.)

Still, a record-smashing 105,000 people attended the 2018 event, rebranded as CRUSH Walls, and it was the first year all artists were paid, a trend that now extends well beyond RiNo’s annual celebration. There’s no better way to dive into the scene in Denver than exploring the neighborhood’s streets and alleyways as they’re transformed once again next month—but first, consider this your primer to the complex, often misunderstood world of street art.

(Read More: 20-Plus Street Artists to Seek Out in RiNo)

Cori Anderson—founder of the Street Art Network, which connects clients in need of murals with artists—helped us define terms you might hear at CRUSH Walls.

Buffing: When a property owner, local government, or artist paints over an existing work, either because it’s unsanctioned or because the wall is being prepped for new art

Graffiti: Writing that is normally spray-painted and can be, but isn’t always, illicit; embellishment (think: bubble lettering, shadows) distinguishes graffiti from a tag

Street Art: An umbrella term that encompasses many forms of art (commissioned and illegal), from graffiti writing and murals to stencils and stickers

Tag: A one-dimensional, usually spray-painted name or symbol; almost always illegal and found on blank spaces or atop other works

Wheatpasting: A form of street art in which paper prints are affixed to surfaces with a clear, durable liquid adhesive—traditionally, wheat flour or starch mixed with water (above, an example by Denver’s Koko Bayer)

A numerical look at CRUSH Walls 2019.

428 – Artist applications submitted, up from 270 in 201
80 – Colorado artists chosen by a panel of eight judges
16 – Invited national and international artists
80 – Murals that will be created over the week of the festival across 30 blocks
~600 – Cans of spray paint provided to artists
40% – Estimated percentage of female artists

Anyone who’s seen Thomas Evans’ vibrantly colored portraits will find it difficult to believe that when the now 34-year-old moved to Colorado in 2006, his main artistic pursuit was airbrushing T-shirts. And when the inaugural CRUSH was held in the alley behind Exdo Event Center a few years later, Evans was there, but he wasn’t painting. Rather, he was break dancing as part of the Hip Hop Congress chapter he founded at the University of Colorado Denver. In between business classes, however, Evans transitioned to creating works on canvas and finally, in 2015, on a wall as part of CRUSH.

Since then, Evans, who also goes by Detour, has been working to master both his technique and the logistics of being a full-time artist—and helping others do the same. His Art Tip Tuesday series on Instagram led to a book deal; Be the Artist is slated to be released by Fulcrum in February.

Although Evans is well-known for his celebrity portraits—for the past two years of the festival, he’s painted notable musicians next to Nocturne Jazz & Supper Club—he prefers to focus on less famous faces. “I’ve been the only black artist in Denver who really does murals on a consistent basis,” Evans says. “So I want to make sure people who look like me are represented.” That’s why he chose five-year-old Britton-Grae Chapman as his model for a huge piece on the backside of RedLine Contemporary Art Center and also why he’s inviting black muralists from other cities to come paint here. That recruitment is a task he says CRUSH Walls is making easier. “Now it’s like, it’s not LA, it’s not New York,” Evans says. “It’s Denver that’s hot.” @detour303

When Anna Charney returned to her native Denver in the spring of 2016 after getting her BFA from the Art Institute of Chicago, she contacted CRUSH organizers simply to volunteer to work that year’s event. In response, they gave her a wall. “I’ll be forever grateful for the risk they took on me,” Charney says. “I was pretty forward about the fact that I’d never used spray paint before or worked large, or outdoors—all pretty daunting tasks.”

After CRUSH, she reached out to festival founder Robin Munro/Dread to offer her help with future projects; he gave her an apprenticeship. Although the skills and connections Charney gained were instrumental to her rapid rise, the 25-year-old has still had some awkward moments. “I’ll have male friends hanging out, and even if I’m clearly the one painting, more often than not, a passerby will go up to the man first,” Charney says. “I don’t think people think there are females in this scene.”

Her bigger challenge has been learning how to efficiently scale up her studio work. To speed up the process, Charney uses an art projector when possible. Another contentious technological advancement she’s embracing is anti-graffiti coating for her permanent outdoor projects. Some argue the protectant is antithetical to the transient nature of street art—which is part of the reason Charney doesn’t call herself a street artist, instead identifying as a muralist. She credits that self-awareness in part to her time with Dread, whose roots are in the graffiti scene. “Even though I don’t paint graffiti,” Charney says, “I still have a lot of respect for what those artists built to allow us to do what we do now.” @annacharneyart

Growing up in Kansas City, Laedan Galicia would follow older friends around as they put up illegal graffiti. The artistic youngster was intrigued, but it was giant projects like the Children’s Mercy Hospital murals painted by Scribe (a Kansas City–based artist who came to Denver for the first CRUSH) that really inspired him—and he hasn’t stopped thinking big since. When he graduated from the Kansas City Art Institute in 2013, he began cultivating his brand under the moniker DINKC (Death Is Not Knowing Certainty, pronounced “dink”). “A lot of my stuff is based off of Día de los Muertos, being Mexican, and then I grew up on Mickey Mouse,” he says. “I mixed a little bit of my culture, old-school cartoons, and street art graffiti.”

After a few years in New York City, DINKC moved to Denver in spring 2017. He’d been doing smaller work on the East Coast, but DINKC quickly found opportunities to paint bigger walls within Denver’s community, including spots at CRUSH in 2017 and 2018. “Here, it’s not necessarily just about doing something cool,” DINKC says. “It’s about doing something meaningful and giving back and collaborating.”

From the extensive line of merchandise—sneakers, totes, T-shirts—he mostly produces in his studio to the backpack he handpainted for a Children’s Hospital Colorado fundraiser, DINKC has embedded himself in the local scene while also garnering mural commissions. Part of the 28-year-old’s distinctive look comes from the fact that he works freehand. “Spray paint is a very unforgiving medium. When you do those lines—very clean, crisp—you have to really boldly, confidently go in there and do it,” DINKC says. “If you hesitate, you’ll see it on the wall, and you’ll waste paint and time.” And wasting anything is the one thing not on DINKC’s ambitious to-do list. @dinkc

As you move throughout Denver, you might get the feeling you’re being watched—by a Japanese warrior woman, almost always in red, white, and black. She peeks around columns under highways and peers down from RiNo warehouse walls. Don’t be alarmed; her creator, Casey Kawaguchi, a self-taught street artist who works entirely freehand and has been evolving his nameless character for almost a decade, says her fight is with him. “More and more, she somehow is a representation of myself,” Kawaguchi says, noting that she increasingly wields a paintbrush in place of a sword. “In any creative pursuit, I feel like there’s this battle; there’s a part of yourself you have to get out of the way.”

Kawaguchi, who grew up near Salt Lake City, says he’s influenced not only by his samurai ancestors and Japanese heritage, but also by the collaborations he’s been doing since he moved to Denver four years ago. For 2015’s CRUSH, local artist EaseOne invited Kawaguchi onto his wall, and the two have worked together every year since. “I enjoy collaborations for the kind of surprise end to the piece,” Kawaguchi says. “You trust your friend’s work and you get to see your stuff mingle with that in a way you wouldn’t have imagined it.”

The 36-year-old’s contemplative nature caught the attention of independent filmmaker David Kaufman, who released a short documentary called Mastery that followed the artist through CRUSH 2017; the pair hopes to put out a follow-up in time for this year’s festival. “It’s coming into focus—this character, who she is, the whole story,” Kawaguchi says. Street art fans need only stop and look around to follow along. @caseykawaguchi

How to be respectful of street artists and their livelihoods.

CRUSH Walls serves as fuel for year-round street-art-focused ventures. Here, your to-do list for the fest and beyond.

Secret Walls, on Friday, September 6, will pit artists against one another—and the clock—in a 90-minute live painting battle. The location will be disclosed via Instagram the week of the festival; spectators decide who wins.

Erin Spradlin and James Carlson, proprietors of Denver Graffiti Tour, host two-hour guided walks through RiNo all year, but be sure to book early if you want a spot during CRUSH Walls. (The new Wine & Walls version includes a stop at the Infinite Monkey Theorem.)

You can find CRUSH Walls swag at RiNo Made inside Zeppelin Station. For everything from canvas works to stickers by local street artists, check out festival founder Robin Munro/Dread’s new Headquarters Gallery in the alley behind Denver Central Market.

Elyria-Swansea’s opening-this-month Mission Ballroom will host live art installations followed by a performance by Mexican pop-rocker Natalia Lafourcade to close out the fest on Sunday, September 8.