There’s an Amish proverb that says, “A happy home is more than a roof over your head; it’s a foundation under your feet.” But when Jan and Steve Davis first saw this 19th-century Victorian in West Highland, it had neither—the roof was missing in areas, the wood floors bent like waves. “There was nothing left except the staircase banister,” Jan says.

Originally built in 1875 by Ambrose Bosler, an early settler in North Denver, the storied home—which has, at various times, been a boarding house, an office building, and the Tilden School for Teaching Health—had been neglected and left open to the elements for years. Renovating and reselling it would be a colossal project, but Jan knew her contractor husband could handle it. What she didn’t expect was to move into the four-story mansion; the couple had recently popped the top on a much more understated bungalow with the intention of it being their forever home. But the city—which filed to foreclose on the blighted Bosler property in 2015 after it had amassed $560,000 in liens—wanted whoever purchased the site to reside there. Says Jan: “Life opens a door and either you walk away, or you walk through the door.” 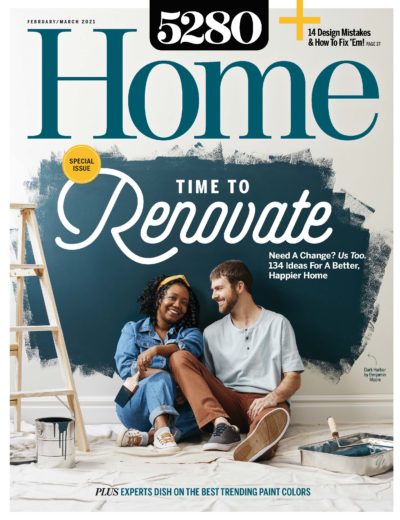 In this case, walking through the door of their new home meant embarking on a two-and-a-half-year-long renovation process. As a designated Denver and National Historic Landmark, the property was subject to a laborious design and construction approval process before the project could begin. The Davises relied on old photos to get the look just right as they replaced all of the wood trim, painted every piece of molding, and scanned antiques stores for era-appropriate furnishings. With guidance from architect Jessica Reske, they even rebuilt the home’s distinctive brick tower, which had been removed decades earlier, and thereby created the perfect vantage point for vistas from Pikes Peak to the Flatirons.

The home’s updated interiors tell the modern side of this makeover story. While the detailing that architect Jon Hindlemann added—including the restored front door and repaired stair handrail, remade from the original walnut—references the structure’s Italianate design, the former owner had stripped out nearly everything else. The three-bedroom, four-bath layout is based around the addition of an elevator—which Jan requested to make it easier for the couple to age in place—and the original window openings, which had to stay put because of the home’s landmark status. In the main bathroom, for example, custom vanities were built around the room’s three windows, and the kitchen sink sits in the island because the existing windows were too low to allow for standard-height countertops underneath.

Period details served as models for most of the upgrades: New interior doors were based on the home’s one still-standing original door; antique chandeliers and sconces from Bonnie Brae Lighting & Repair are like the fixtures that might once have hung in various rooms; and the walnut-and-ash inset in the white-oak entryway floor is a replica of the original. “I think it really gives the feeling that the house is an old house, even though it’s all brand-new on the inside,” Jan says. “It’s definitely a blend of modern-clean and historic references.”

While these efforts satisfied the homeowners’ personal desire to maintain the home’s character, Jan was still concerned about how to make the cavernous rooms with 12-foot-high ceilings feel homey. She called in Amy McCawley of Lusso Interior Design—with whom the Davises have worked for years—to brighten the interiors with fun, contemporary touches like Benjamin Moore’s gray-green Croquet paint color on the kitchen cabinets, and a sleek marble fireplace in the living room. Antique-looking hardware harkens back to the home’s origins, while family heirlooms, including a gold mirror in the entryway and a chest on the second-floor landing, seamlessly connect the house’s historic and current aesthetics.

Outside, Jan, a Colorado State University–certified master gardener who has built gardens at every one of her homes, transformed the expansive front yard into a verdant oasis. She planned a potager garden near the kitchen and a wild, organic English garden that provides some natural privacy with its surfeit of agastache, peonies, cardoons, and salvias. Laurel Raines of Dig Studio laid out the garden and conceived the hardscape design, including a patio and dining area off the kitchen and a walkway made from Borgert stone pavers. Perimeter hedges further separate the home from the street, providing a natural privacy fence.