On the northern edge of the Santa Fe Arts District, you might notice a door marked with a tree-ring imprint and the letters “ESP,” subtly welcoming you into a cozy space filled with cafe tables, vintage rugs, and records. Belly up to the custom bar, where you’ll find a musical host spinning records at a built-in turntable, the sounds of Ella Fitzgerald, James Brown, or Phoebe Bridgers reverberating throughout the space.

You’re at ESP, Denver’s first HiFi cafe and bar—and one of only a handful of listening bars in the country. Co-owners Mitch Foster and Will Minter opened the bar in September, filling a void in the city’s music scene and giving guests a place to relax, unplug, and simply listen to tunes while enjoying barista-crafted beverages by day, and highballs and natural wines by night. “Our whole idea with the cocktail menu was to keep things simple and beautiful,” Foster says. “We opted to exclude any shaken drinks from the menu to help keep noise below the music, since the music is the focus of everything we do.”

Foster’s first experience at a listening bar was in Los Angeles at In Sheep’s Clothing, which no longer operates as a bar today, but still provides a record club and pop-up listening experiences. The hard-to-find speakeasy was barely marked, (much like ESP), filled with incense and sound—and for Foster, it was life changing. “When I walked in, I didn’t know what to do,” he says. “I just stood there and was like holy shit, what is this place? It struck me immediately. The sound, the smell, it was beautiful. And the GM, David, walked over and was like, ‘Want to take a seat? You okay?’ He showed us to our seats, and we sat there for like eight hours.” 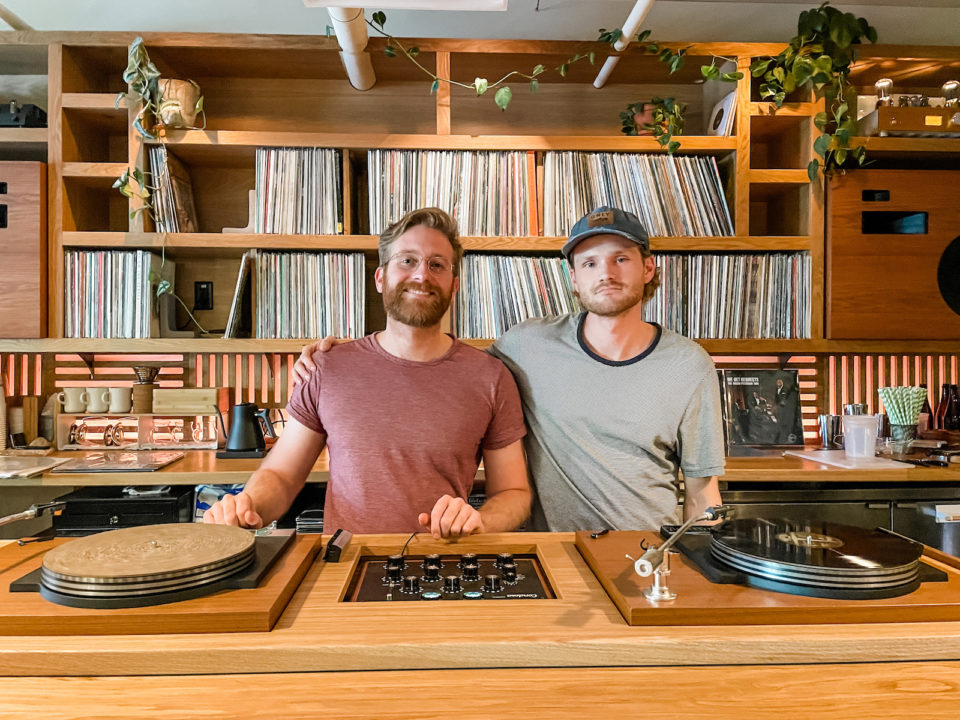 This is the experience Foster and Minter hope to recreate for guests at ESP. The intimate, 30-seat space hums at a vibration you can’t find anywhere else in Denver. A musical host—usually also your barista or bartender—selects records from a thoughtfully curated collection (500 discs and counting), and continuously fades them in and out throughout the day. The host reads the room and selects records that provide a peaceful, relaxed ambience while keeping the focus on the music.

“The idea is we’re kind of controlling and complementing the energy in the room while still holding a line, because we don’t want to become a bar that just plays music,” Foster says. “The music comes first, and we want that to be apparent.”

That first fateful experience in Los Angeles in 2019 solidified Foster and Minter’s decision to bring the concept to Denver. Foster would helm the hospitality, and Minter would act as musical lead. In 2019, the duo traveled to Tokyo to research jazz kissas, the first listening bars that became popular in Japan after the end of World War II. “They were born in the ’50s when Japan was an isolationationist country,” Foster says. “Records were one of the only things of cultural significance that they could import, and jazz was picking up at that time, so these kissas started popping up where people could congregate and consume that new jazz music.”

Foster and Minter visited over 40 listening bars, noting their likes and dislikes, and what might be possible for Denver. Traditionally, jazz kissas are silent, and talking is discouraged—some don’t even serve alcohol. But the few dozen renditions in the U.S. and abroad have tweaked the concept to suit their culture and audience. “When you walk in [to ESP], you don’t say this is a Japanese concept, because it’s not,” Foster says. “We took inspiration from that style of hospitality and put our own spin on it.”

At ESP, that means creating an intimate, highly curated listening and hospitality experience for guests. In the morning, the cafe brews up a low-energy, relaxed vibe with ambient music, folk, or classical music—“things that have more space to them; a little bit more airy, a little bit more open,” Minter says. “It could be weird stuff, or it could be more approachable like Neil Young.” If the crowd gets too loud, Foster and Minter might turn on something with strong vocals—like Terry Callier’s “900 Miles,” which cuts through the din and brings focus back to the music. “That’s really where these speakers shine, is in that mid- and high-range,” Foster says. “Voices just cut right through—it feels like they’re in the room with you.”

At night, expect a slightly higher energy filled with funk, soul, jazz, disco, boogie, yacht and psychedelic rock, and more. “Maybe it’s the closing end to a night, and we’ll play Chet Baker’s Chet, which is a really sexy, slow jazz album that is like, ballads only,” Minter says. “Or if it’s really busy, maybe it’ll be a Miles Davis album—a bit more hard bop. James Brown is a really easy go-to for when you want to heighten the energy—it’s a feel-good thing that maybe people are going to recognize. The music’s really going to reflect what the environment’s asking for in terms of people’s energies.”

Minter curated much of the music with the help of Los Angeles–based music supervisor and DJ Zach Cowie, drawing from what he calls his parents’ “odd music taste” and his background as a DJ in Chicago during his college years. He credits the diversity of that community with expanding his musical interest, and ESP’s record collection includes a variety of styles most Denverites won’t find played together under one roof: everything from field recordings and ambient music to bossa nova, Japanese jazz, and modern folk.

What you won’t hear much of? Hip-hop, electronic music, or modern hits. “With any system, you’re sort of choosing strengths, and our weakness is that we can’t really provide the best experience for hip-hop or for house and techno and harder-hitting electronic music,” Minter says. “It’s not to say that we don’t appreciate that, but it’s always going to sound better if you have the subwoofers in your car or really good headphones with a low end. It’s almost doing it an injustice having some of that here.”

As for new music, Minter says 21st-century records only make up 20 to 30 percent of the collection, mostly because modern-made records don’t sound as good. “Unfortunately records are still viewed as a novelty item that a band will just press to sell at concerts,” Minter says. “There’s not as much care and attention [to the sound quality].”

And for Foster and Minter, quality is key. The records in their collection are bought and kept in mint or near-mint condition, so you won’t hear pops or scratches. And the duo says speaker placement was the most important decision they made acoustically within the space. While speakers behind the bar offer targeted listening for the stool seats, the two freestanding Klipsch Klipschorn speakers standing guard from the back of the room offer deep, clear stereo sound for the entire room.

“There’s a lot of lore in the HiFi community around Klipschorns,” Foster says. He says the same type of speakers were used in the David Mancuso loft parties in New York—safe spaces in the 1970s for LGBTQ+ and underrepresented communities to gather around a “musical host” who would play sets throughout the evening. “They didn’t have your stereotypical DJs come in and play, where a DJ beat matches and has this continuous flow,” Foster says. “It opens up a lot of bandwidth to be able to play different styles of music in the same set—you’re not locked into beats per minute or a specific genre, so there’s room for more diversity and inclusion. And that’s the model that we have here.”

In addition to their own collection of vinyl, Foster and Minter are excited to tap into Denver’s DJ scene and offer up the listening bar as a space to try new things. “Most DJs only can play certain types of music because there’s this expectation that comes with the set—like it’s going to be danceable, it’s going to be standing room,” Minter says. “But here, I’m really letting them take it wherever they want to.”

Whatever the mood, energy, or music, Foster’s goal is always to create the same sense of awe and immersion that inspired him to create ESP in the first place. “I’m most excited about pushing people’s musical taste boundaries and having them experience something that they never have and won’t anywhere else,” he says. “Like a sense of awe and curiosity; like not really knowing why you’re feeling the way you’re feeling, and exploring that.”

Can I bring my own records in?
“That is where we do draw the line for one reason: A lot of people don’t take care of their records,” Foster says. “They think you’re meant to hear scratches and pops, [but you’re not]. We are also trying to poll the room in a sense, so we do have to be careful about what we play and when we play it.”

Can I request a song?
“The bartender is essentially the DJ who’s potentially serving and hosting, so adding requests in is just one way to make it a bit more complicated,” Minter says. The host plays one side of a record, then switches to another side of a different record, so it’s not as easy as adding a song to a queue. Be a good listener, and trust your hosts to guide you on your musical journey.

Where should I sit for the best experience?
The speakers operate in stereo sound, meaning if you sit in the “sweet spot” as Foster calls it, you’ll get a full surround sound experience. “I can explain it to you, but you [have to] hear it,” Foster says. “It’s like a phantom image of the drummer’s over there, the bassist is here, the singer is there, and you can visually interpret the sound.” If you’re ever lucky enough to be at ESP when there’s a quiet crowd and just a few patrons, ask (nicely) if they’d be kind enough to show you the spot. Sit back, close your eyes, and when “The Girl from Ipanema” comes on (or another classic), you’ll feel like the original artists are all around you.

Where can I buy records in Colorado?
For Minter, it was important to source the collection from Colorado record stores. “Wax Trax was a big one,” he says. “We have records from Recollect, from Twist and Shout, from Little Horse Vintage in Louisville, from Absolute Vinyl in Longmont. I even went down to the Springs to get some stuff, and maybe even some stuff from a record store in Nederland.” His advice for digging for records? Check the record labels and collaborators on the back of the album. “[If I see] the drummer who worked with James Brown, I can sort of predict how that part of the music is going to sound,” he says. “It’s just this constant spider webbing of whether it’s the individuals or it’s the record label that has a certain reputation. There’s a million ways to find records, but that’s a very useful way.” Check out our list of the best record stores here.