When it hit the market in 2011, this 1953 ranch house in Denver’s Crestmoor Park neighborhood was a time capsule. Its pine-paneled office, metallic-wallpaper-wrapped bathrooms, and green galley kitchen were 1960s originals. But to potential buyer Paul Wrona, an award-winning landscape architect with more than a decade on the Denver design scene, the house was the epitome of “good-bones” potential. (Back in its heyday, the charming ranch was featured in a magazine.)

Even better for Wrona, co-owner and principal of landscape architecture firm Elevate by Design, was the home’s spacious, flat lot, which boasted enormous, mature trees that only a decades-old property could offer. “The lot was large, and the house was situated nicely to have both a beautiful front yard and a spacious backyard. It was the perfect blank canvas,” Wrona says. So, he and his wife, Susan, and their then-3-year-old son (and a baby boy on the way) bought the 2,300-square-foot house, inheriting two spruce trees, a large Patmore green ash, and a huge interior and exterior renovation project. 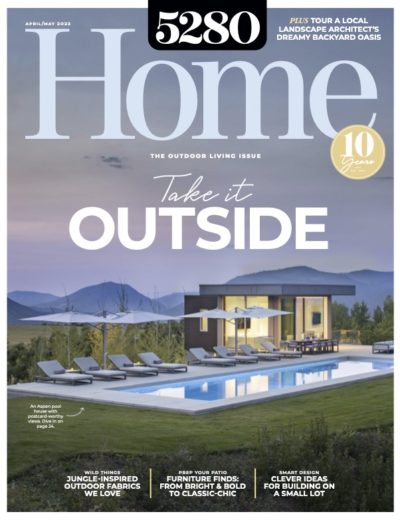 When the young family moved in, a spit-shine pulled the house into the 21st century. Goodbye, 1960s chintz; hello, espresso-stained kitchen island. But as the boys grew—one is now in middle school—the dwelling’s one-and-a-half bathrooms and cramped, dark rooms lost their charm. When budget and bandwidth synchronized, Wrona says, “it was time to make the house look and function better for the modern-life experience.”

The long-awaited renovation began in 2018, and it was a neighborhood affair. The Wronas hired architect Luke Taylor-Brown of LTBA Architecture to re-envision the layout and facade. “Luke is an extremely talented architect—and he also happens to be our neighbor, so he had the advantage of studying our house from across the street,” Wrona says. Next, they hired builder Marty Harrison, owner of LifeHouse Construction, who plays tennis with Wrona on neighborhood courts. And although the Wronas’ interior designer, Kelly Christensen, principal of KC Studio, doesn’t live in Crestmoor Park, she did go to college with Wrona’s business partner, and Christensen and Wrona have been friends for a long time.

After the team decided that a second-story addition would ruin the ranch’s charm, and that over-expanding the main level would gobble up too much of the yard, Taylor-Brown began the herculean task of squeezing must-have amenities into just 600 additional square feet. “The biggest issues the owners had with the house were that it didn’t have large enough bedrooms, enough room for storage, or direct access from the living room to the backyard,” Taylor-Brown says. The addition provided a main bedroom suite, making way elsewhere for bigger bedrooms and a full bathroom for the boys, plus a powder room, laundry room, and home office. La Cantina sliding doors in the living room were a “key addition, as they visually borrow space from the yard and make the room feel larger than it is,” Taylor-Brown says. A warm, walnut-paneled wall (with built-in bar) separates the kitchen and living and dining rooms.

Wrona describes the couple’s vision for the interiors as “a modern vibe with rustic accents, with every room [feeling] warm and comfortable.” Christensen delivered. “Kelly gave it a punch of color and texture that really captured our style,” he says. A few well-chosen, nature-inspired wallpapers, like the wispy, Emma Hayes Textiles’ pattern on the dining room’s accent wall, bring in an organic feel.

But it’s the four outdoor living areas, including three separate fire pits (Wrona also co-owns Denver-based fire pit company Nisho) that really bring together the home. “Our entire landscape needed to be renovated, and because I couldn’t tackle all of it at once, I took it one area at a time,” Wrona says of the decade-long build-out. “I would select a space, study it for as long as it took to get a vision, and then figure out a way to implement it.” There’s a backyard courtyard, good for “outdoor dining, watching a movie or game, and cooking s’mores on the fire pit,” he says. The back deck, he adds, is the perfect spot for “morning coffee or an evening drink, both better with a fire, of course.” The family often sits out front to chat with neighbors on summer nights or while waiting for trick-or-treaters on Halloween. And the large back lawn is where the family plays summer rounds of cornhole and the boys practice their favorite sports.

“This house doesn’t have a large footprint, so using our outdoor space as a connection to the house was so important,” Wrona says. “In the spring, summer, and fall, our slider doors are almost always open to welcome in nature.” Which feels, well, perfectly natural.