Fifty years ago this month, U.S. ground troops fought their first major battle in the Vietnam War. The Battle of Ia Drang Valley took place from November 14 to 18. By the end of the fight, 250 U.S. soldiers and 1,000 enemy combatants were dead. (The Vietnam War claimed 1.3 million lives total; of the 58,220 U.S. troops killed, 623 were Coloradans.) Colorado remains particularly connected to the bloody fight at Ia Drang: The commanding officer on the ground during the first phase of the conflict, Hal Moore—still alive today—later took over as executive vice president of Crested Butte Mountain Resort. Here is Moore’s story, as well as a snapshot of Colorado’s veteran community. 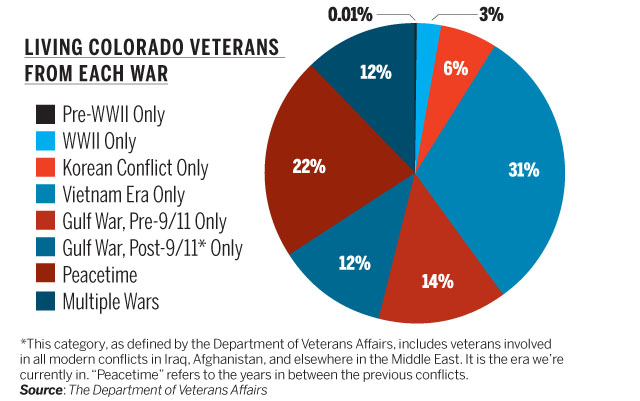 6,000: Approximate number of names etched into the 21 glass panels of the Colorado Freedom Memorial in Aurora. The memorial honors Colorado veterans who have died in every conflict since the Spanish-American War in 1898. Established in 2013, the unique structure is dedicated to veterans of all wars, instead of a single military engagement.

1899: Year the country’s first Veterans of Foreign Wars post opened—in Colorado. Now located in the Art District on Santa Fe, VFW Post 1 boasts nearly 1,000 members and remains one of a few posts in the nation without a bar. It does have an art gallery, open Friday evenings, as well as the Art of War Project, a nonprofit dedicated to using art therapy to help veterans. 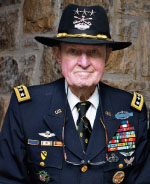 93: The current age of Hal Moore, the lieutenant colonel in command of the 1st Battalion of the 7th Calvary Regiment during the battle at Ia Drang. Surrounded by a much larger enemy force, the 1st Battalion was nearly overrun during the first three days of fighting, but Moore’s quick actions, exceptional grasp of military strategy, and courageous leadership are credited as part of the reason the United States didn’t suffer more casualties. In 1977, Moore, who was born in Kentucky, retired as a three-star general and took a job as the executive vice president of Crested Butte Mountain Resort. He began writing We Were Soldiers Once… And Young (which became a Hollywood film starring Mel Gibson) from the loft of his Crested Butte home, where he lived with his wife, Julie, until the mid-’90s.

World Premiere: Acronym The VA estimates 22 veterans die by suicide and another 75 attempt to take their own lives every day. Those statistics are the reason local KOA morning news co-host Steffan Tubbs produced and directed a new documentary, Acronym, which examines veterans’ struggles with post-traumatic stress disorder and suicide. Acronym includes stories from veterans of every war since World War II and is scheduled to premiere in Denver on Veterans Day. mountaintm.com

1,000 lbs: Approximate weight of the honor bell—which would be struck to honor a veteran’s passing—that Denver nonprofit Honor Bell Foundation plans to forge, partially out of metal artifacts from fallen veterans. The group, started by two Colorado veterans, hopes to collect and ship the artifacts to a foundry in Ohio by May of next year. The bell then would be sent back to Colorado and dedicated at Fort Logan National Cemetery on Memorial Day. honorbell.org

—Embedded photos courtesy of Cecile Rainey; istock; The Veterans of Foreign Wars of the United States