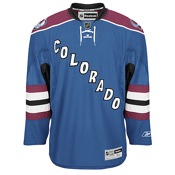 It’s typical of sports fans to get caught up in how bad things are (just ask Broncos fans after yesterday’s loss). So it’s sometimes nice to ponder why we fell in love with a particular sport in the first place. Yahoo! Sports’ Puck Dadddy blog is doing just that, allowing people across the country to sound off on why they love hockey.

One installment features Avalanche blogger James “Tapeleg” Gralian and his Jerseys and Hockey Love blog, on which he muses about the hockey teams he encounters as he travels the country for work. He fell in love with hockey and the Avalanche atop a bar stool during the magical 1995-96 season, when the Avs captured their first Stanley Cup, and hasn’t looked back since.

Let’s hope he wasn’t too upset at the 8-2 smackdown the Vancouver Canucks hung on the Avs at the Pepsi Center Saturday night. The Avs looked overwhelmed almost from the beginning, with the Canucks racking up three even-strength goals in just more than 10 minutes in the first period, notes Canada’s National Post.

The Avs are 2-4-1 in their last seven games, points out The Denver Post, which wonders whether center Paul Stastny should be doing more to earn the five-year, $33 million contract he signed last year. Stastny has four goals and 14 assists but hasn’t scored a goal since October 24. Mile High Hockey hints that the loss could have something to do with the new, predominantly blue jersey the team unveiled last week, and the blog is in no hurry to see the jerseys again. If only it were that simple.