As Joanne Tubbs Kelly tells it in Walking Him Home: Helping My Husband Die With Dignity, released on August 9, she and Alan Kelly had an immediate connection when he hired her to write marketing materials for the company he worked for. But he was on his second marriage at the time, and she was twice divorced. A year later, when his marriage dissolved, the fortysomethings decided to give love another go—together. There was, Joanne says, a lot of baggage to deal with, but they called each other “Sweetie,” learned to tolerate each other’s taste in music (he loved Willie Nelson, she…did not), and got married in Boulder in 1997 in a church, a first for both of them.

It would be more than a decade before Joanne noticed the disturbances—kicking, arms flailing, yelling—in Alan’s sleep. The nighttime interruptions were just the beginning though. Memory lapses, incontinence, and low blood pressure followed. After seeing a specialist, Alan learned he likely had a degenerative disease known as multiple system atrophy (MSA), although a true diagnosis would take many years to get. Whatever was happening in Alan’s brain, it wasn’t good—and it was going to get worse quickly. 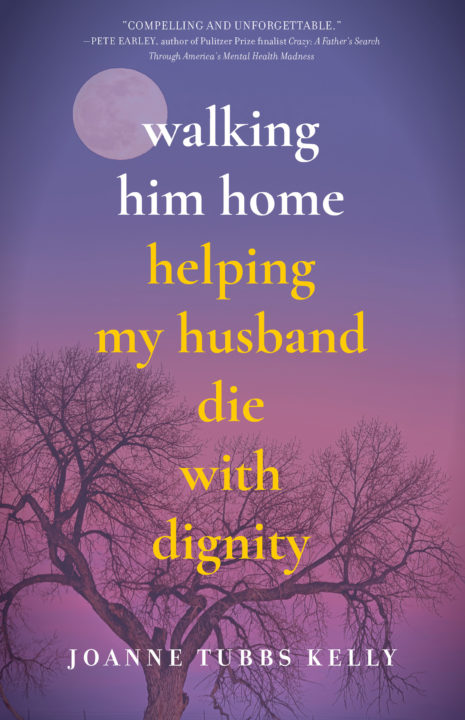 As Alan’s body began to fail, he and Joanne started to plan for what they knew was an inevitable end. Both had voted for the 2016 Colorado End-of-Life Options Act, which legalized a medical-aid-in-dying system in the state, but never thought they’d have to use it. Although Joanne was reluctant to let the love of her life go early despite the pain he was in, she knew she had to help him. She calls it an act of love.

In January 2020, 71-year-old Alan set a date to die, drank the life-ending medication, and, after four hours, left the body that had betrayed him. Two and a half years later, Joanne published her candid account of their relationship, Alan’s illness, her challenges as a caretaker, and how they navigated a still-new medical-aid-in-dying system in Colorado.

On National Grief Awareness Day, 5280 spoke with Joanne about writing about someone you love, processing loss, and what other people need to know about dying.

Editor’s note: The following conversation has been edited for length and clarity.

5280: First of all, I’m so sorry about Alan. How are you doing?
Joanne Tubbs Kelly: Thank you. You know, I was so blessed to have had him in my life. I miss him, but I try to remember that every day.

What do you miss most?
He was so charming, so funny. His eyes always sparkled. I’m an introvert, and he was the kind of person who could talk to anyone, would go to every party. He was just fun to be around.

What made you decide to write this memoir so soon after Alan died?
I have several answers to that. First, when I went looking for books about medical aid in dying, I was looking for a book like this. A book about a husband-and-wife team who did this together. I wasn’t looking for answers so much as I was looking for the right questions to ask. I knew I could get through it, but I needed guidance. I couldn’t find one book like this. Second, I was conflicted about medical aid in dying. I supported it. I voted for it. But I did that for other people. I wanted Alan to grow old with me. I knew writing about it might help me resolve my inner conflicts. Finally, and this might be too religious for some, but I felt called to write it. My minister gave a talk in which he said You have a job to do on Earth. What is it? Figure it out and then do it. So, I did.

What is Walking Him Home really about?
It’s a love story. But it’s also about how to plan a death. We all know how to plan weddings and other life events. We don’t know how to plan a death. Alan and I had to learn that. It wasn’t rocket science, but we tried to design the ultimate personal experience: the way he wanted to die. And that’s the beauty of medical aid in dying. Alan had agency over his own death.

How did your plans play out?
Toward the end, I could no longer take care of him by myself, so he had been at a nursing home. But when the time came, we picked a date. Then we notified his daughters and brother and other close friends. I had to make sure the hospice care people could accommodate that date. I had to make sure the diener, the person who would harvest Alan’s brain for medical research into MSA, was available. Then I planned a party. We billed it as “Come Say Your Goodbyes,” and we asked that people bring a memory to share. A few days later, I called an ambulance to bring him home so he could die in his own bed.

Was it difficult to navigate the medical-aid-in-dying system in Colorado?
Our health care provider was great. They made it easy. If we’d had to do it all on our own, I’m not sure if I could’ve done it. They gave me a 10-page sheet of instructions with all the nitty-gritty. When the day came, my friend, who has a nursing background, mixed the medication, making sure to get all the lumps out. She even tasted it so she could prepare Alan for how bitter it was going to be. He still spit it out and said, “Yuck!”

What happened next?
Alan lost consciousness after about 10 minutes. The last words he said to me were, “I love you.” That really helped.

What was the hardest thing for you to write about?
I really didn’t process my grief until the day I packaged up my book to send it to my publisher. Writing kept him close to me. It was comforting to always be thinking about him and the things he said and the things we did. When I was done writing, that’s when I broke down into a big puddle. That was December 2021.

Were you worried that Alan might not have liked what you wrote?
I got his permission to write the book before he died. We knew he was sick for a long time before he allowed me to tell anyone. He never wanted anyone to think of him as disabled. I think the only parts of the book he wouldn’t like would be the parts where I write about his bladder issues, him wetting the bed. That was hard on him.

What have you learned about grief in the past couple of years?
Well, what’s not in the book is that six months after Alan died, my sister died. Not long after that, my son died. I’m somewhat of an expert on grief. COVID-19 isolation wasn’t good for the world, but at that time, it was good for me. I appreciated being able to be alone. But it’s funny that you ask because now that the book is out, I made an appointment with my therapist for next week. She helped me do the bare minimum amount of grief processing I needed to do to get through things over the past few years, but now I’m ready to do the deep work. I’m finally ready to face the grief.

Is there a larger message you’re hoping to spread with your book?
My one message to readers is this: We all need to have these conversations now. We need to talk about death with the people we love. We need to tell each other what we want at the end of life. And it doesn’t matter if you’re 18 or 80, you need to have that talk. If you need tools, the Conversation Project and Compassion & Choices are helpful. Don’t wait until you can’t have that conversation.