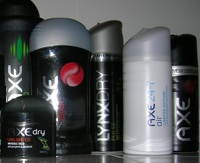 In the advertisements, young men use Axe Body Spray to attract the babes. But now Axe is attracting the pyromaniacs–teenagers who can turn cans of the strong-smelling stuff into homemade flamethrowers, a new concern for West Metro Fire Rescue investigators. “We’ve had a dozen young people charged with various arson crimes in the last month and all involved Axe Body Spray,” fire spokeswoman Cindy Matthews tells 7News. In one case, investigators say the bushes by an apartment building burst into flames before spreading to the complex, according toÂ 9News. West Metro wants teachers, principals, and parents to get involved, according toÂ The Denver Post, and is asking for help in getting kids to ignore videos such asÂ this one, which demonstrates an Axe flamethrower. Axe, meanwhile, is addressing the issue on itsÂ website.