Farm-to-table dinners are getting a new spin this spring thanks to the innovative team at the Squeaky Bean Farm & Table—and some talented high school students. Bean front man Josh Olsen has partnered with Warren Tech, a Jefferson County vocational high school, to create a one of a kind, symbiotic culinary program. The new program will serve to comprehensively educate kids about agriculture, community involvement, and the culinary arts—and it’ll also provide the Squeaky Bean and other Denver restaurants with organically grown produce. Simply called Acres, the program is replacing Bean Acre, the one-acre plot that Olsen previously operated for the Squeaky Bean’s exclusive use.

Olsen, whose forearm features a tattoo of a greenhouse encircled by vines, has ambitious plans for revamping Warren Tech’s long-abandoned greenhouse program. Olsen is introducing a biodynamic farm on three acres behind Warren Tech that is cyclical not only in its production, but also in its community relationships. Everything grown at Acres is organic, and will either be used in Warren Tech’s culinary program or sold to the Squeaky Bean and other local restaurants. The Bean will then save any vegetable scraps to be transported back to the farm and composted, saving hundreds of gallons of scrap from the landfills. Pests will be managed naturally, too—Olsen plans to release hundreds of praying mantises to manage the grasshoppers that ravaged last year’s bean harvest.

Olsen is taking a biodynamic approach to community as well. Decades ago, the students of Warren Tech’s long-defunct greenhouse program had grown award-winning poinsettias to sell during the holidays. Even though Acres is taking a different direction, Olsen opted to reinstate poinsettia program. “There are people who look for them every year, and it’s more important to have that connection to the community, to bring something from the old program into today, and not just throw away what they did,” Olsen says. As part of the new program, Warren Tech students will also help build greenhouses at local elementary schools, where they’ll teach the younger generations to plant, care for, and cultivate their own harvests. 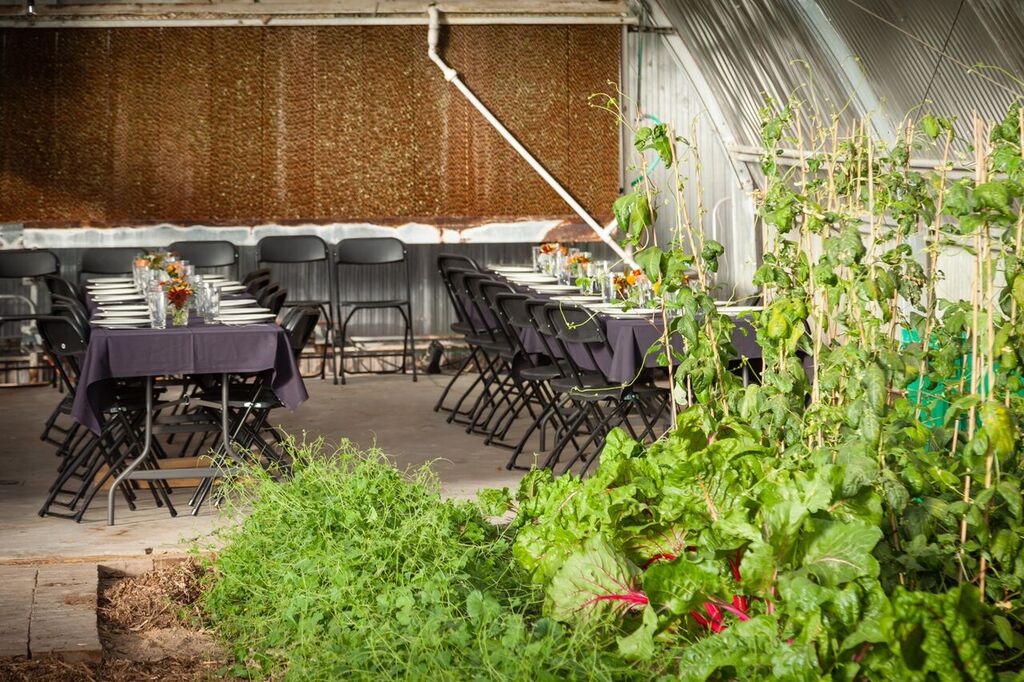 What does all of this have to do with farm dinners? The jewel in the crown of the entire project is the series of seasonally themed dinners that will be held on the farm and prepared in conjunction with the students in Warren Tech’s culinary program. The year-round dinners will give students a unique opportunity to work side by side with some of Denver’s best chefs and prepare meals with the produce they helped to grow. (Right now, that means radishes, kale, turnips, tomatoes, greens, and fresh herbs.) According to Olsen, the students will participate in the dinners on their own time, not for school credit. In short, they’ll do it because they’re passionate about it.

In fact, Olsen and his partners at the Squeaky Bean have already hired a few grads from the Warren Tech program to work in the restaurant’s kitchen, giving students with a new culinary diploma a chance to cut their teeth in a first-class environment. Biodynamic, indeed.

The first Acres dinner will be held on Sunday, March 20. Tickets are $70 per person (a portion of the proceeds benefits Warren Tech’s culinary program). Call to reserve your spot at 303-623-2665. For more info on upcoming farm dinners, go to the Squeaky Bean’s website.