When Brian Calvert left his post at High Country News in late September, a small corner of Twitter lit up with re-tweets and red hearts.

The now-former HCN editor in chief—he wasn’t exactly fired; publisher Greg Hanscom confirmed to 5280 that he “invited him to resign”—used the occasion to spell out the perils and possibilities of journalism in the American West. He framed it as a two-sided prophecy for the magazine: High Country News will either help uphold white supremacy, or it will help to undermine it. Dig a little deeper, and his tweet-staccatoed short essay is about much more than just one magazine’s future. It’s about how well-meaning, white environmentalists unwittingly contribute to the silencing and subjugation of minority communities, and what it might take to do better. 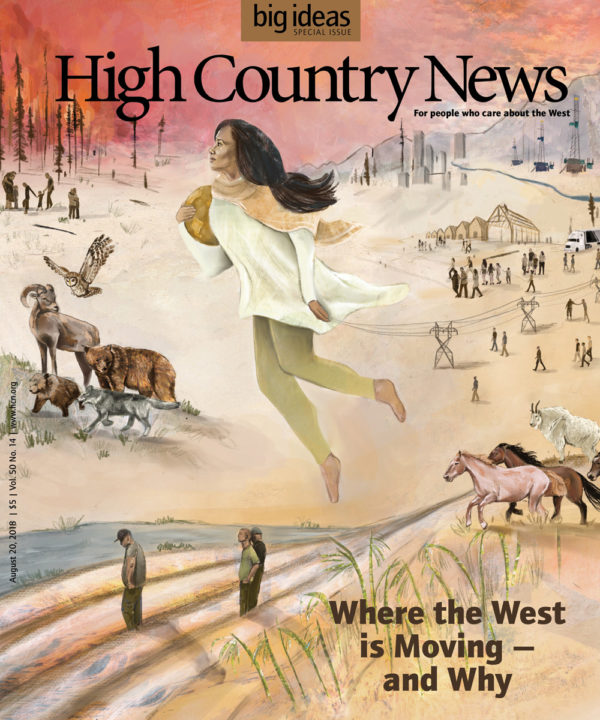 “This region is built out of stolen land and genocidal policies,” Calvert told 5280 about the thread. “You can’t really understand this region without understanding that in a really deep way.”

If you’ve never heard of High Country News, you’re in the majority. The plucky, Paonia-based magazine has just 37,000 subscribers — out of the nearly 80 million people who live in the region it serves. Though it’s known to have an environmentalist bent, its readers aren’t exactly your average environmentalists.

“These are not normal people,” said HCN’s former editor Betsy Marston in an interview commemorating the magazine’s 50th anniversary last month. “These are people who are experts in their fields, whether they’re professors or people who work for the [Bureau of Land Management] or the Forest Service or worked for their county.”

Often, those groups are also white.

Because High Country News has pioneered a nonprofit, reader-supported funding model (a la NPR), it has to keep those readers coming back to ensure the monetary support it needs to survive. At that, it has succeeded by stuffing its issues with reporting that those groups—those highly knowledgeable, passionate, usually white people—have taken great interest in: public lands management, water rights, climate change, and sometimes, indigenous affairs.

“For an environmental magazine, it was a little bit ahead of its time, I think,” Calvert says. “The thing that happened along the way was it also was not super inclusive.”

During Calvert’s tenure as editor in chief—he was in the role for three-and-a-half years but previously served as the managing editor starting in 2015—the magazine began pointing toward a new north star. Rather than ‘writing up’ to the peculiar group that makes up most of HCN’s audience, as Marston said, the magazine began to instead write out, in an effort to capture new readers, including members of immigrant and indigenous communities.

“Our operating principles, or guidelines for the editorial department, were that we take our time and we find representative voices,” Calvert says. “We don’t skip the historical context … When you have those kinds of operating principles, it just requires the writer and editor to do more work and make more calls, and then the magazine starts to be more representative of the region that it purports to cover.”

He pointed out a recent article, “Extreme heat is here, and it’s deadly,” by Jessica Kutz, an Arizona-based HCN writer and editor. “It was never, like, a deliberate story to say, hey, how is climate change impacting Latinos in the Southwest? That’s the way High Country News used to do things … which [I think] can be kind of patronizing in some ways,” Calvert says. “But to have a climate piece that says, hey, we’re just going to talk about climate heat and we’re going to talk to the people impacted by it … and this is representative of the region.”

Their most major project was to launch the nation’s first Indigenous Affairs desk (outside of Native publications) in 2017, with a mission to write for, rather than about, indigenous readers. In order to do this, they’d have to accomplish two things: Gain this audience’s trust, and write articles that go beyond the tropes journalists tend to flock to in Indian Country, like dying languages or alcoholism.

They brought in Tristan Ahtone, an accomplished investigative reporter and editor and president of the Native American Journalists Association, as a consultant. He stayed for three years before moving on to become the editor in chief of the Texas Observer, an Austin-based investigative reporting nonprofit.

“High Country News did have a reputation in the past of being exploitive in indigenous communities,” Ahtone says, adding that when the publication did cover indigenous affairs, it sort of extracted stories from indigenous communities—meaning it collected stories from these groups, but wrote them for a white audience. “It’s mainly just about whose viewpoint you’re centering,” Ahtone says. “[If you center indigenous readers] you’re doing a public service, because that community is getting information that they didn’t have before.”

The idea was that news written with indigenous readers in mind, rather than HCN’s core audience, can and will be interesting and informative to all readers. Importantly, it takes a more inclusive approach to who the organization is trying to serve.

Hopefully, it will also help the magazine pick away at the narrative of “The West” that serves white supremacy. This is what Calvert’s thread was about.

“Improperly defined,” he tweeted, ‘“the West’ can denote a cultural landscape that is exceedingly homogenous, the product of Manifest Destiny, which is a process of settler-colonialism, displacement and white supremacy that continues to this day. This is not merely ‘history,’ but ongoing.”

The romanticized “West” he’s referring to is the one implanted in most of our imaginations—the one we were raised to love and long for, a rugged landscape of untamed expanses, fertile with possibility, there for the conquering. It’s “Manifest Destiny,” and it’s also “The mountains are calling, and I must go.” It’s public lands, there for us, the American people (but usually, when you visit them, mostly white people). There might be some indigenous communities and immigrants in this constructed mental image, but they are flat caricatures done a disservice by our collective imagination.

It’s harder than it sounds for white environmentalists not to fall into the trap of thinking about the West, the environment, and environmentalism in terms of Manifest Destiny. (For a deeper dive into why that is, start with Calvert’s 2017 essay on romanticism, climate doom, and the West, “So what if we’re doomed?”) After all, conservation is not inherently bad. We all love the wild, and therefore, we love public lands. We just need to spend a little longer thinking about who is really included in that “public,” and how these lands came to be “public” in the first place.

Consider this: In the 50th anniversary interview, HCN assistant editor Carl Segerstrom asked Marston about the tension building around the magazine’s future, “and a feeling by some that the magazine isn’t covering public lands enough and is too focused on social issues. What do you think about that sentiment?”

Marston replied, “Do you really want to know this? I think it’s great that we cover Native American stories with Native American writers, and in a serious, concentrated, consistent way. I think that was a wonderful addition to High Country News. At the same time, there doesn’t seem to be, for me, enough focus on the public lands where everything happens … If you ignore what had been the core of High Country News, you’re in danger of losing readers.”

“Bravo!” wrote one reader, Lloyd Throne of Medford, Oregon, in the letters section of the latest issue. “I hope her wisdom, experience, and knowledge is heeded.”

Daniel Cordalis, another reader who described himself as Native and from “Arcata, California (but really Durango, Colorado),” had another take on Marston’s lament: “My response: If they [readers] don’t like it, let them leave. A new West is the West we need.”

As for the future of HCN, Hanscom says the staff plans to carry on the changes Calvert set in motion during his tenure. By Calvert stepping aside, Hanscom hopes to make way for fresh editorial savvy, especially now that the newsroom is fully remote.

But given HCN’s historical audience, the staff certainly has their work cut out for them.