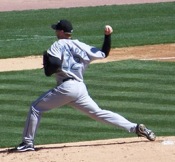 Get out the brooms, Rockies fans. Your team completed a three-game sweep of the Washington Nationals yesterday, crushing them 10-4 in what The Washington Post calls a “3-hour, 13-minute plundering of baseball’s natural beauty.” Jorge De La Rosa pitched into the seventh inning, allowing three runs on five hits, struck out five batters, and walked three (via The Denver Post).

The Rockies are now 27-11 under manager Jim Tracy, although the offense has been struggling lately.

The team still needs to make some decisions before the July 31 trading deadline. Some fans are calling for the team to trade for former Arvada star Roy Halladay, a superstar pitcher for the Toronto Blue Jays. It would take a lot to get him, and the Rockies haven’t indicated whether they’re willing to give up an everyday starter, a top-flight pitching prospect, and another prospect to get him. Sports Illustrated doesn’t even list the Rockies as one of the 11 teams most likely to land Halladay.

Whatever happens, Rockies fans are at least one step closer to keeping their beautiful mountain views from Coors Field. The Post also reported yesterday that the Denver City Council will soon hear a proposal to impose 70-foot height limitations on the buildings around the field to preserve the views to the west.

A lawyer for a nearby landowner, however, argues that the restriction would decrease the value of the landowner’s property, which can now legally build at a height of 140 feet. The group that owns the stadium may buy the land, as it has done in the past, to prevent any obstructions.