During his career, Denver native Don Cheadle has portrayed a wide range of characters, from a hotelier saving lives in Hotel Rwanda to War Machine in the Marvel Universe to an adult film star in Boogie Nights. No, you cannot confine Cheadle to a box—unless, it turns out, it’s an invisible box constructed by his own imagination.

To promote the second season of Black Friday, in which the actor plays a 1980s-era stock broker who enjoys cocaine and Lamborghini limos, Cheadle appeared on the NPR show Wait, Wait Don’t Tell Me in late June (sorry, we’re behind on our podcasts). During the show, Cheadle recalled his education as an actor—including as a student at Denver’s East High School.

While discussing his range, Cheadle said, “I just always want to keep it interesting. And I came out of California Institute of the Arts. And everybody was a character actor, you know? We were involved in comedy, drama, comedia, mime, you know, what have you.”

Naturally, the dropping of the word “mime” required further explanation. “Well, not in college,” Cheadle said. “In high school, I was in a mime show. But that’s a whole story.” He then distanced himself from the classic stuck-in-a-box routine, claiming, “The box thing is so passé. That’s so—it’s so 1955, man, half that stuff.”

We were intrigued. So being the intrepid investigative reporters we are, we decided to see if any evidence of this mimecraft still existed—and, boy, did we hit pay dirt. Thanks to researchers at the Denver Public Library, we discovered a 1981 yearbook from East that contained an entry for the school’s mime troop, which was called… wait for it… It’s All Mime.

Let’s just sit with that for a second.

Front and center in the spread is this image of Cheadle, then a junior, literally flexing his mime skills:

And here’s the full page: 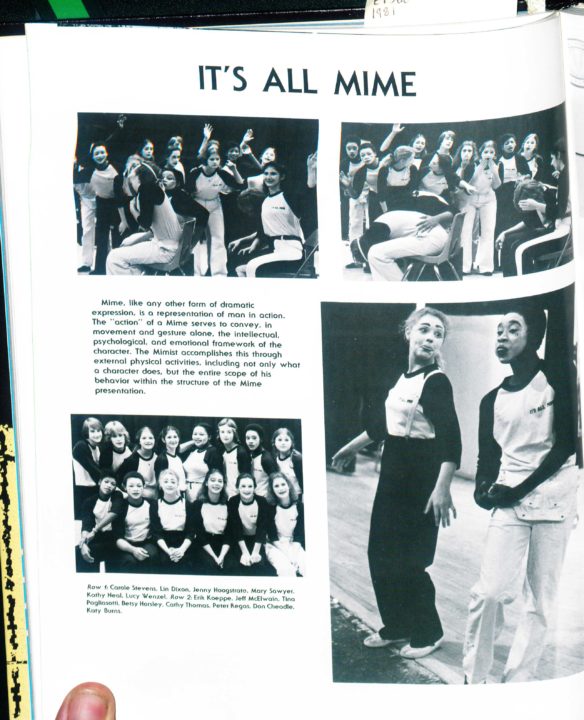 In high school, Cheadle was also an active member of the jazz band, concert choir, theater department, and, presumably, a virgin. You can see more photos of Cheadle from East here, and watch him talk about his miming with Jimmy Fallon here.