On September 22, 1996, Jason Regier was flying down the highway outside Salt Lake City, doing about 75 mph, partway through the long drive from Denver to Corvallis, Oregon.

The 21-year-old reached over to change the station on his car radio. As he adjusted the dial, one of the wheels of his Jeep dipped off the road, sending the vehicle skidding and then rolling. When it stopped, Regier lay semi-conscious in the wreckage, his neck broken in two places and so swollen that he could barely breathe.

Just days earlier, his life couldn’t have been better. He was headed for his senior year and his final season of Division-1 soccer at Oregon State University. Awaiting him in the coming months were an early graduation, a professional soccer tryout, a European vacation, and job offers in Oregon and Colorado.

When he woke up in a hospital bed in Salt Lake City two days after his accident, Regier didn’t yet realize that those dreams were gone. Lying motionless on his bed, unfamiliar with the stillness—he was used to running five miles a day—he was ready to move again. With his family in the room, he asked his mother to have his doctors unstrap him from the bed.

Her answer was clear and chilling: “Jason, you’re not strapped down.”

Regier was paralyzed from the neck down—and the only weight on top of him was a bedsheet. 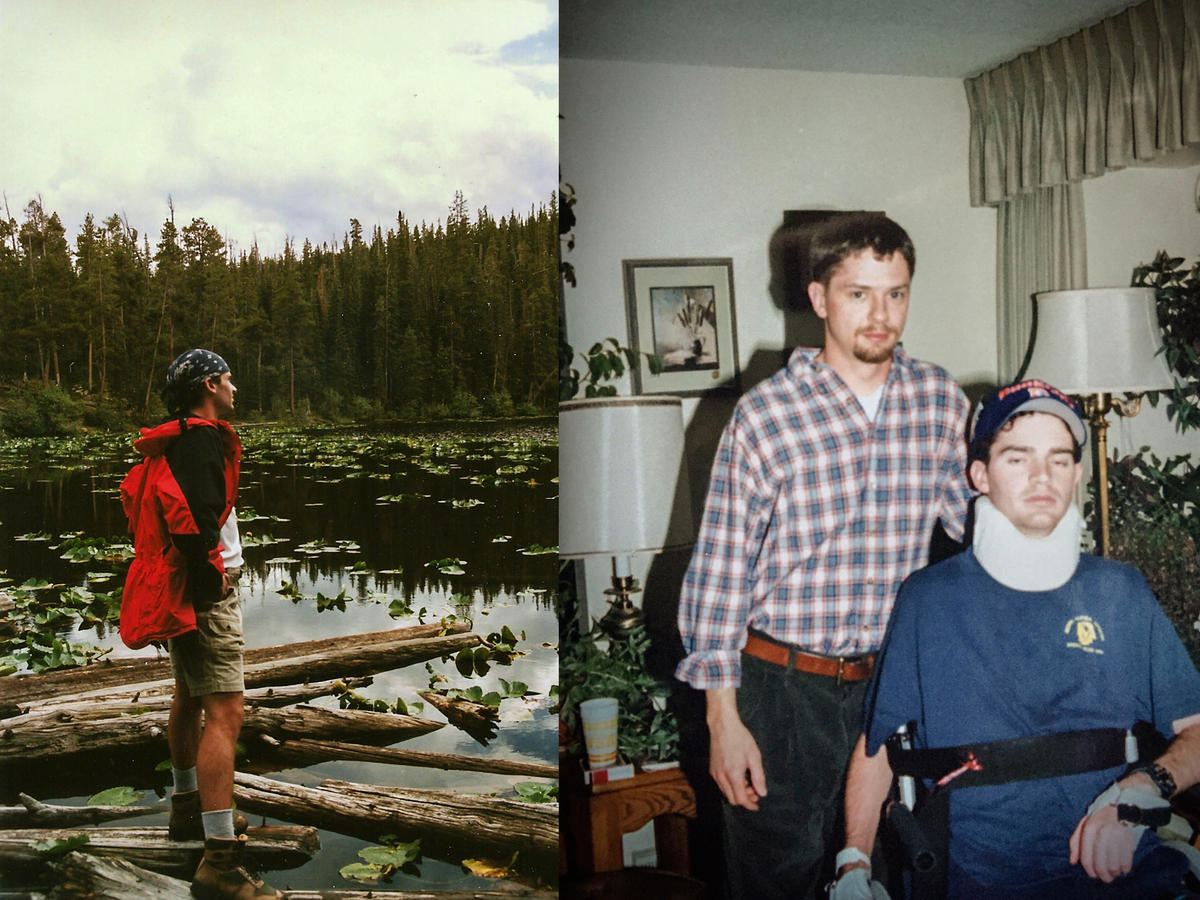 Left: Jason in the Colorado mountains in 1996, months before his accident. Right: Jason with his brother, Jeff, in November of 1996, two months after his accident.

Twenty years later, some of Regier’s favorite moments are when he is strapped down—into the chair he pushes for miles each day as captain of the U.S. Paralympic Wheelchair Rugby team. Since he earned a spot on Team USA nine years after his accident, Regier’s accomplishments include two World Championships, a 2008 Paralympic gold medal, and a bronze medal at the 2012 London Games.

Now, as the 41-year-old captain of the world’s top-ranked team enters the 2016 Rio Paralympics, Regier has a chance to reclaim that gold medal he missed in London—and, potentially, end his career as one of the most decorated wheelchair rugby players of all time.

If success has been the main descriptor of Regier’s 19 years in rugby, his career has been characterized even more by its improbability. Upon his arrival at LDS Hospital in Salt Lake City after his accident, he suffered through long, sleepless, nights as he sweltered under the blankets of his hospital bed. “Probably the toughest part was at night,” Regier says. “You’re there alone with just your thoughts. I remember, early on, being grateful I could talk and I could eat. But I remember having to face that realization, this might be it.”

After five days in Salt Lake City, Regier was transferred by air ambulance to Colorado’s Craig Hospital, an Englewood rehabilitation center that cares for patients with spinal cord and brain injuries. He spent the next three and a half months at Craig, slowly relearning muscle function. The first milestone, a month into his rehabilitation, was being able to sit up past 45 degrees. The next, three weeks later, was regaining movement in his arms. At first, just lifting his arm to brush his teeth left him without the energy to push his wheelchair down the hall. “I was just shaking my head,” Regier says. “I was like, I just got my ass kicked by a toothbrush. ”

In those initial days, his family suffered with him. “It’s a situation that you never really expect yourself to be in, and all of a sudden you are,” Regier’s brother, Jeff, says. “It just kind of came over our family, I guess, like a tidal wave.”

After the months at Craig and with some critical parts of his rehab over, Regier was released in January 1997. He returned to Denver, where a new challenge awaited: finding motivation after realizing his previous life goals were shattered. He turned to books, including Man’s Search for Meaning, the famed memoir of Holocaust survivor Viktor Frankl. “You just go, ‘Oh, let’s not warm up to a Holocaust book,’” Regier says. “But it was one of those things when I went home, I could read those books because I wanted to deal with those things. And I wanted to know about life and what was really going on, some of those big questions.”

Determined to set new goals for himself, Regier worked with his teachers at Oregon State to set up a curriculum so he could finish his studies. He graduated in the spring with his fellow classmates, and soon set his sights on a new goal: wheelchair rugby.

“Still Life Out There”

During the weekend before he was to be released from Craig, Regier watched a wheelchair rugby tournament hosted by the hospital. The sport, originally called “murderball,” is played on a regulation-size basketball court, with each team of four working to cross the opponent’s goal-line with the volleyball-sized ball. At the time, Regier could hardly push a wheelchair, but the game stuck with him for one reason—it looked tough. “When people see it and it’s full contact, chair to chair, and you see a 250-pound guy just totally knock some other guy’s chair out from under him and put him on his face, you’re like, ‘That’s not what I’d expect from a group of guys who have broken necks,’” Regier says. “It was refreshing that there was still life out there.”

The summer after his accident, he decided to give the sport a try. At the start of his first season, Regier could propel his chair for a half mile; it would be three years before he could push a mile comfortably on his own. He rose through the ranks of Colorado’s club wheelchair rugby team, the Denver Harlequins, and in 1999 he was invited to try out for the national Paralympic team. In 2005, he made Team USA’s developmental team. “I remember him telling me [early in his career], ‘I just worked hard to get in people’s way. That’s all I could really do,'” says Claire Cahow, one of Jason’s recreational therapists at Craig. “It was fun to watch those first steps become something much, much more.”

From his first year with the Paralympic team through the end of 2010, Regier and Team USA went undefeated, winning two World Championships and gold in the 2008 Beijing Paralympics. Regier originally saw the 2012 London Paralympics as his last go-around, but in the semifinals against Canada, Team USA fell apart early. Facing their largest deficit ever in the Paralympics, the Americans fought back and tied the game with 30 seconds left. One turnover, one foul, and one score later, Regier and his teammates sat stunned in their chairs as Canada escaped with a one-point victory.

Although the U.S. rebounded to beat Japan for the bronze medal, for Regier, the loss stung. “My original goal was to make two World Championships, two Paralympics,” he says. “You kind of go, ‘Man, this would be perfect. Go out with a gold, unbeaten record.’ It didn’t work out like that.”

After years of training, Regier took a year off following the loss. He married his girlfriend, Angela, and thought about whether he wanted to continue with the sport. But he couldn’t shake the thrill of rugby competition. Two years later, Regier found himself back at the World Championships, but a gold medal eluded his grasp there as well. He decided to make another stab—perhaps his last—at the 2016 Rio Paralympics.

Jason races down the floor in his “Captain America” chair during the 2012 London Paralympics. Jason and Team USA won the bronze medal after a heartbreaking loss to Canada in the semifinals.

Regier says he covered 25 miles in his chair over two days during Team USA’s nine-day Rio training camp. Whether they win gold or not, Regier will return home from the Paralympics just days from the 20th anniversary of the accident that left him wondering if he’d ever move again. “Everything comes full circle, and I think it’s just such an incredible landmark event in terms of where he’s been over the last 20 years,” says Jake Manley, Craig Hospital’s marketing and media services manager and Regier’s friend for 18 years. “For him to have the opportunity to win gold, after how hard he’s worked and everything that he’s accomplished, it’s pretty incredible.”

To many of Regier’s family and friends, his journey to his third Paralympic medal—much like his recovery—is not surprising. “Every time I try to describe my brother to somebody, I tell them, ‘Don’t feel sorry for Jason,’” Jeff says. “’He’s actually accomplished more in his life at his age than you have. And that’s no knock on you.’”

This time, Regier will have extra support: His 10-month-old son, Beckett, will be in the Rio grandstand with Angela as they watch what could be Regier’s last game in his battered rugby chair. His brother will be there, too, hoping that the young man he once saw lying helpless on a hospital bed can achieve his final athletic goal. “A gold would be no different than what John Elway and Peyton Manning achieved in their wonderful football careers,” Jeff says. “It would be the icing on the cake and the way to go out.”