It’s almost 6 a.m. on a crisp July morning in downtown Silverton. Two hundred and three ultra runners, decked out in hydration vests and lightweight jackets, stand shivering in the early morning light outside of Silverton High School, alongside the gathering crowd of friends, family, and fans. Soon, a man calls for attention and lines the runners up across a dirt road heading out of town. The race is about to begin, he announces. Seconds later, the runners seize forward, beginning a 100-mile journey through the rugged San Juan Mountains. The 2016 Hardrock Hundred Mile Endurance Run has officially begun. 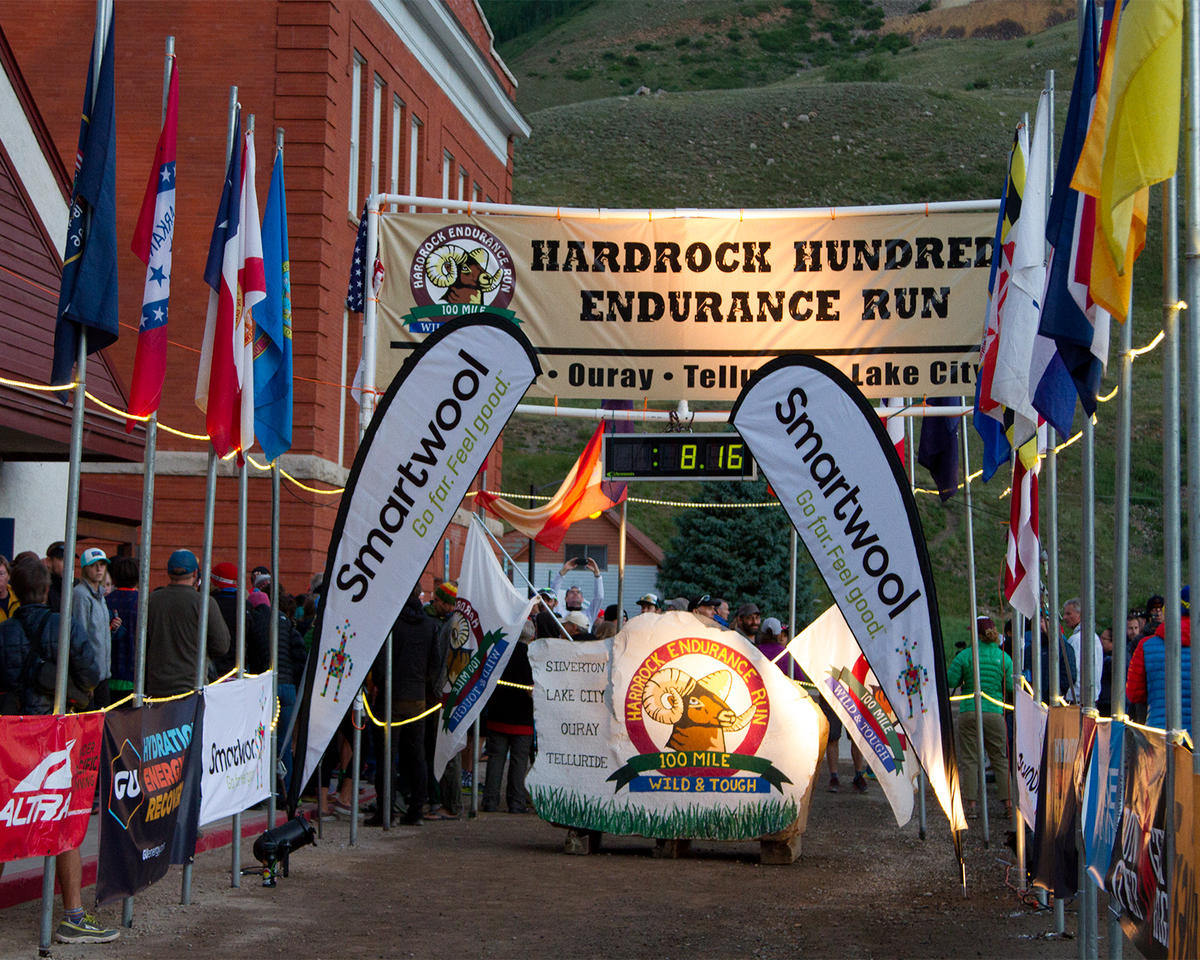 The Hardrock Hundred official rock sits at the start/finish line at Silverton High School. Per tradition, the first thing Hardrock finishers do upon completing the race is kiss the rock. 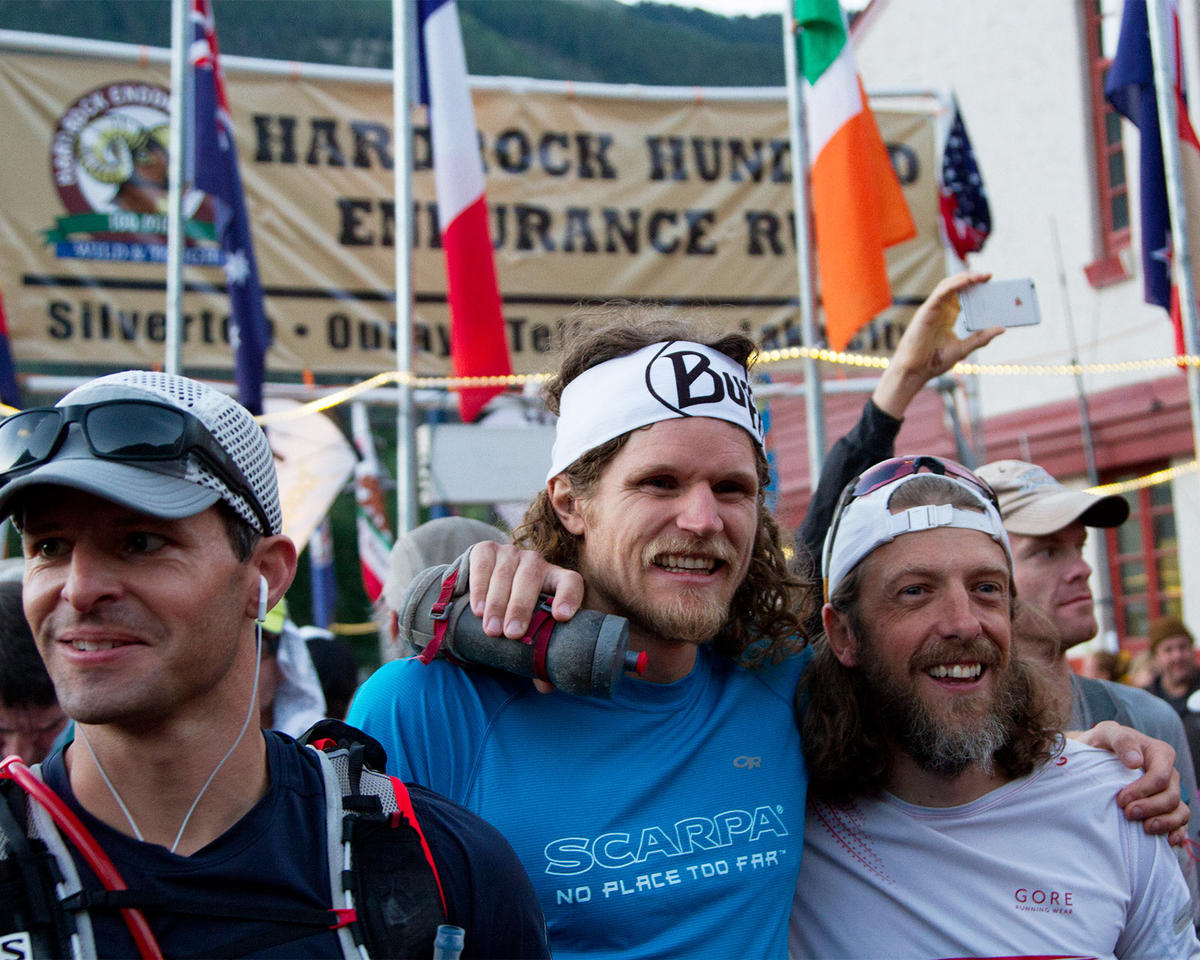 Racers take photos prior to the start of the 24th Hardrock Hundred Endurance Race. Just over 150 athletes were entered into this year’s race. 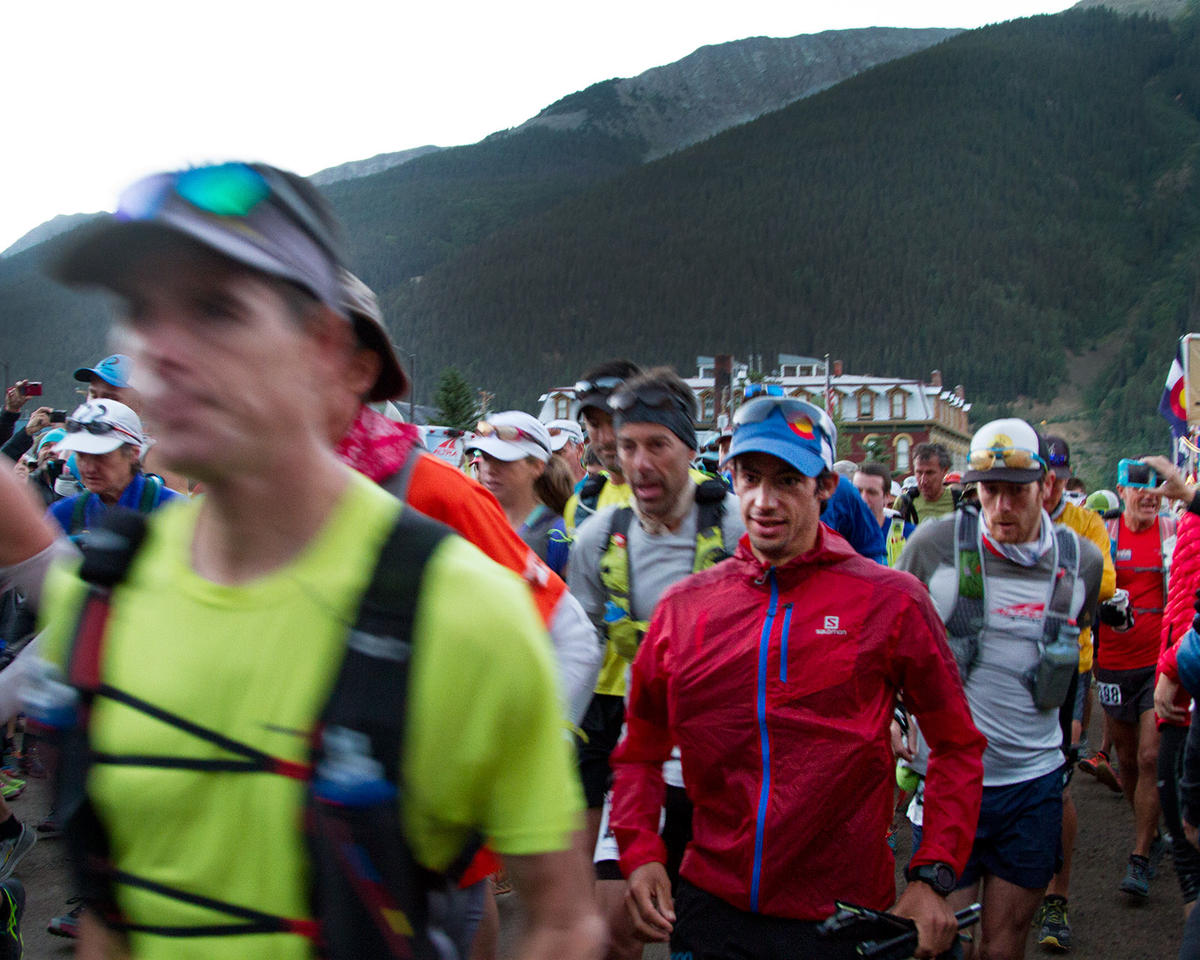 Hardrock 2016 co-winner Killian Jornet (in the red Salomon jacket) at the start of the race in Silverton. Jornet finished the clockwise route in 22 hours, 58 minutes, alongside Jason Schlarb.

The 100-mile race, which started in 1992, runs a treacherous loop, beginning and ending in downtown Silverton. The runners travel through Telluride, Ouray, and Lake City, with a total elevation gain of 66,100 feet (33,050 feet of both gain and loss). Racers rise above 12,000 feet 13 times. Each year, the race switches directions: The 2016 route ran clockwise.

There are 13 aid stations throughout the course, with a chance to pick up a pacer once the runner reaches the Ouray Aid Station, mile 43.9, which is also the lowest point of the course, at 7,680 feet. The highest point is Handies Peak (14,048 feet), around mile 63. Many runners will reach the peak in total darkness.

Runners must complete the Hardrock in 48 hours. Currently, the course records are held by Killian Jornet, who completed the trek in 22 hours, 41 minutes, Diana Finkel, who finished in 27 hours, 18 minutes. It takes most runners about 41 hours to finish, however, meaning they get to see the sun set two times over the duration of their race—and at that elevation, the sunset is quite a spectacle. 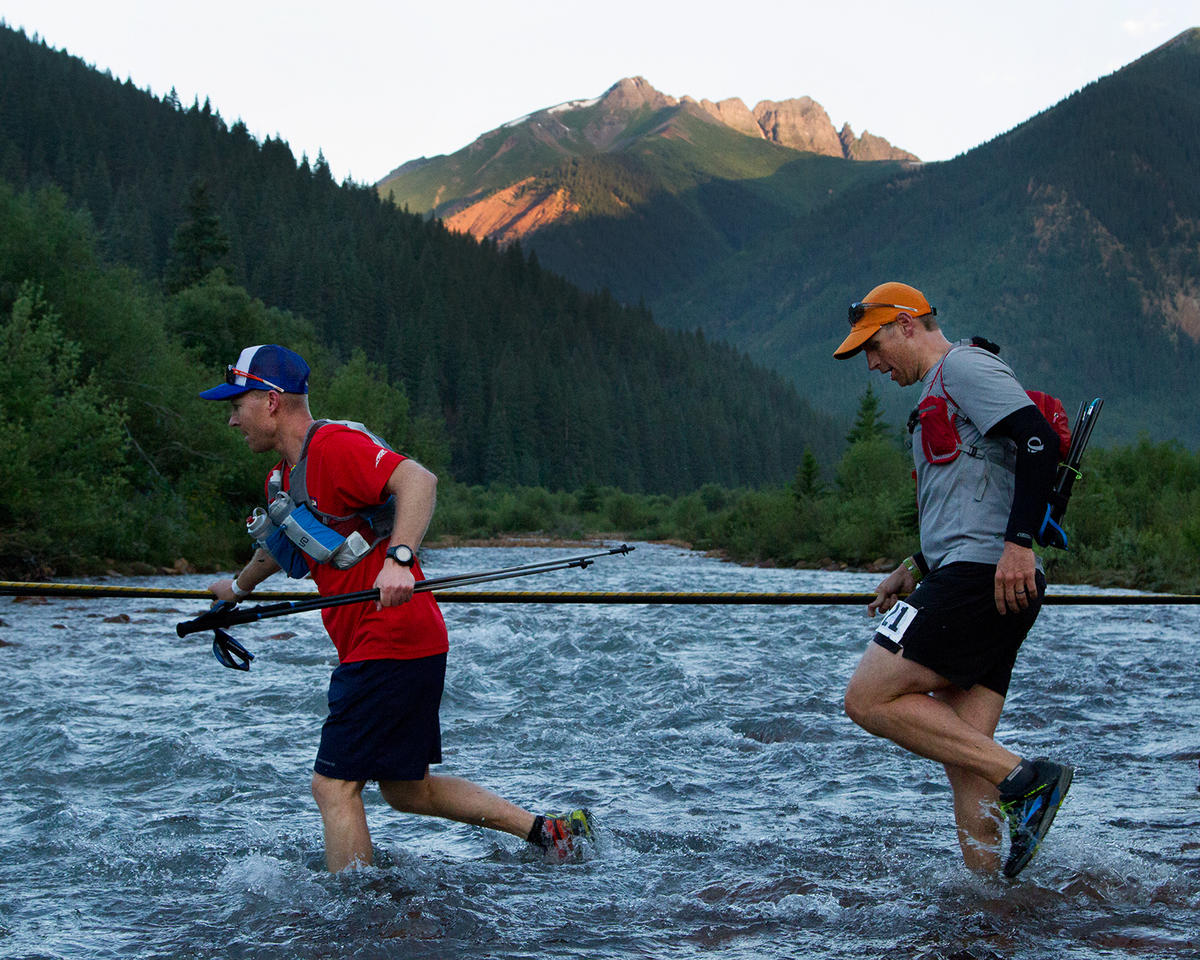 Racers use a fixed rope anchor to cross the knee-deep Mineral Creek at mile two.

The steep climb up to Ice Lake Basin and over to Island Lake, around mile 13, is a scenic calf-buster. 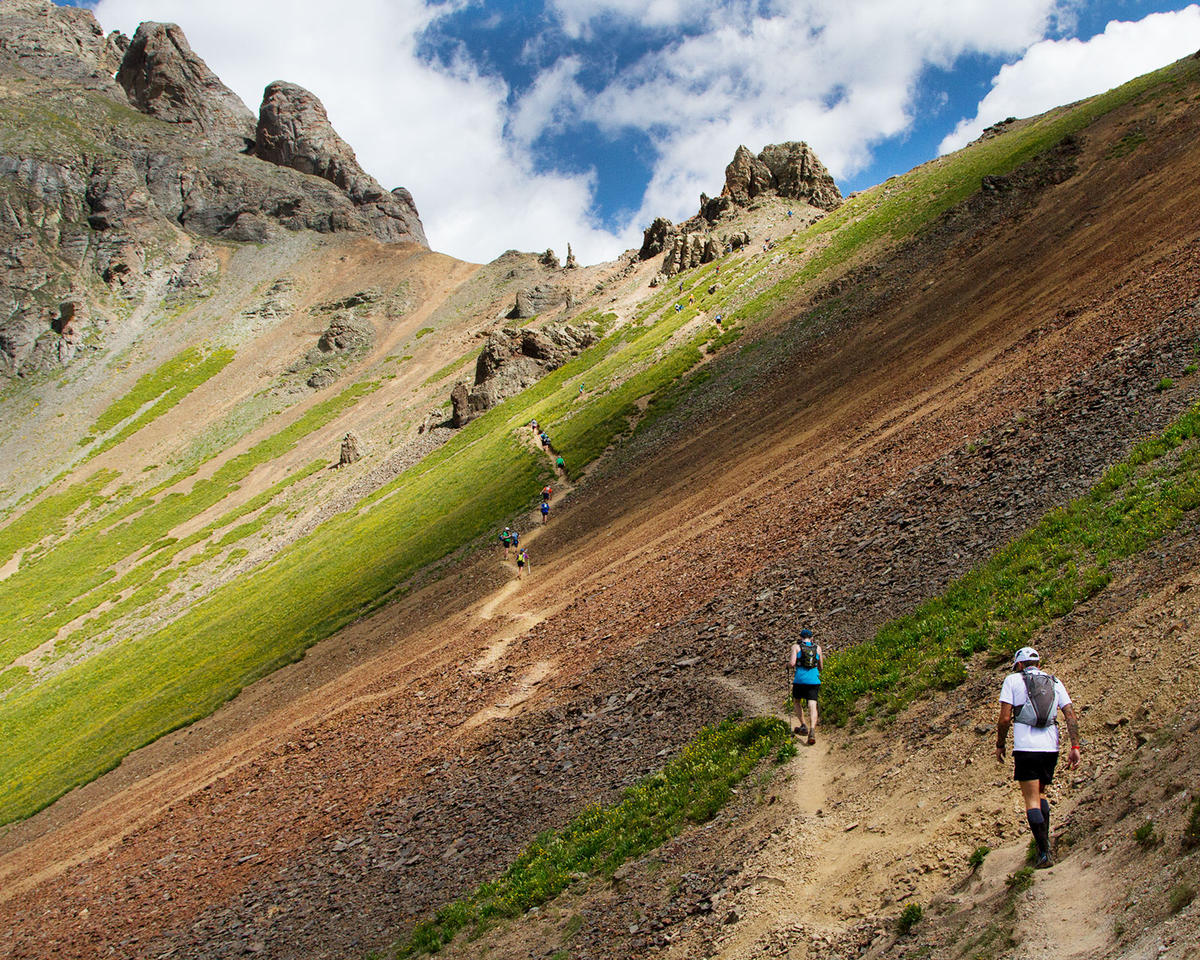 Hardrock racers climb up to Grant Swamp Pass at mile 14, one of many 12,000-foot points.

Described as a “post-graduate run,” the Hardrock Hundred does not allow novice runners—and for good reason. Besides the insane elevation gain, the runners are exposed to steep climbs, exposure at high elevation, long stretches of time between aid stations, snow crossings, and opportunities for fatal falls at many points throughout the course. Because of this, qualifications are set in place in order to deem that a runner is ready to tackle Hardrock’s challenges: Eight hours of service at either an ultra race aid station, trail work on an ultra trail, or ultra race managment experience; and a finish at a qualifying 100-plus mile race (such as the Barkley Marathons, Ultra-Trail du Mont Blanc (UTMB) and Steamboat’s Run Rabbit Run).

Even if a runner meets all qualifications, he or she isn’t guaranteed a spot at Hardrock. With thousands of applicants and limited spots (only a little more than 150 are accepted), Hardrock uses three weighted lottery systems. The male and female winners from the previous year are automatically allowed into the race. Another 47 spots are reserved for Hardrock first-timers, and 35 spots are given to veterans (a person with five or more Hardrock finishes). The remaining 70 spots are allocated to anyone who doesn’t fit the first-timer or veteran categories. This system creates a balanced mix of newcomers and seasoned racers. 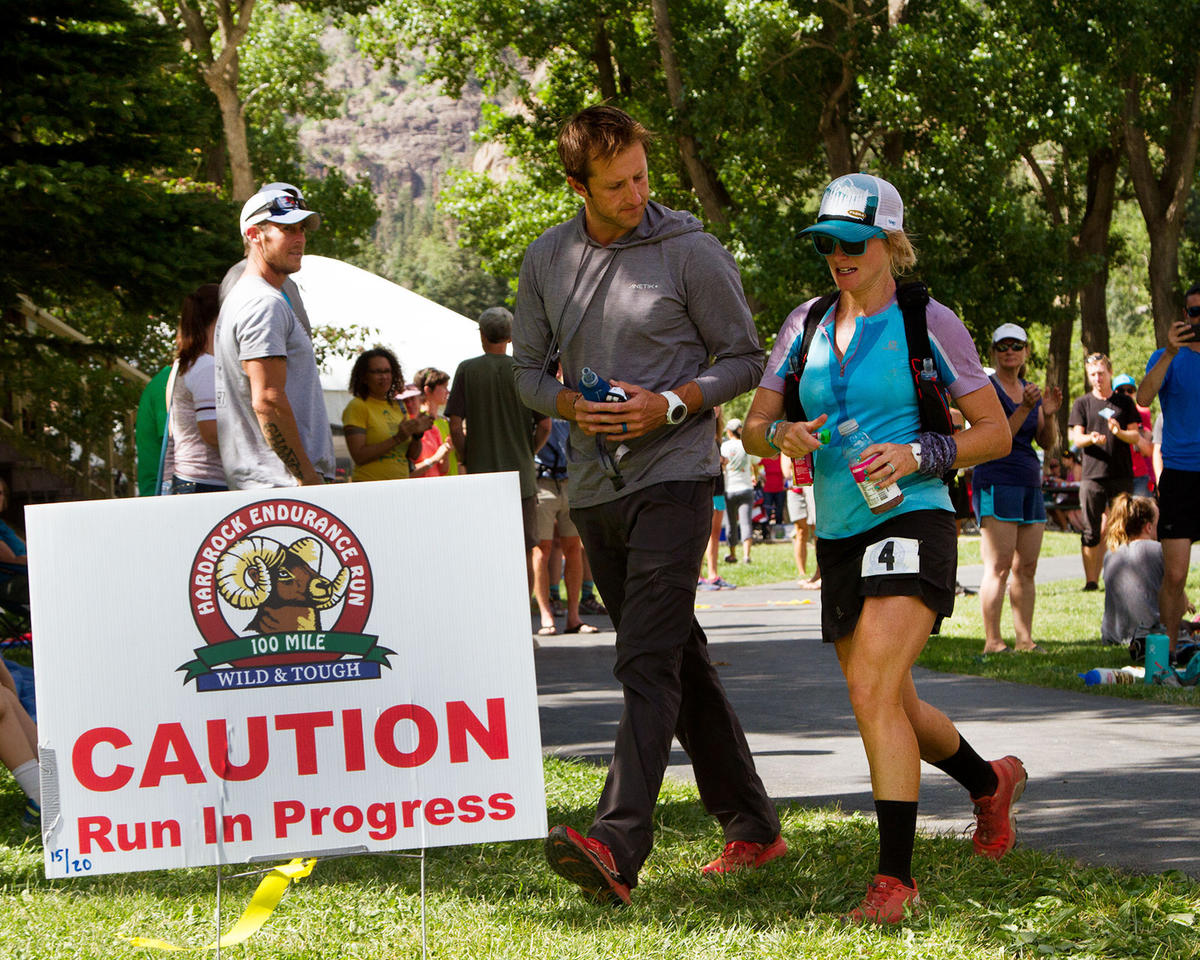 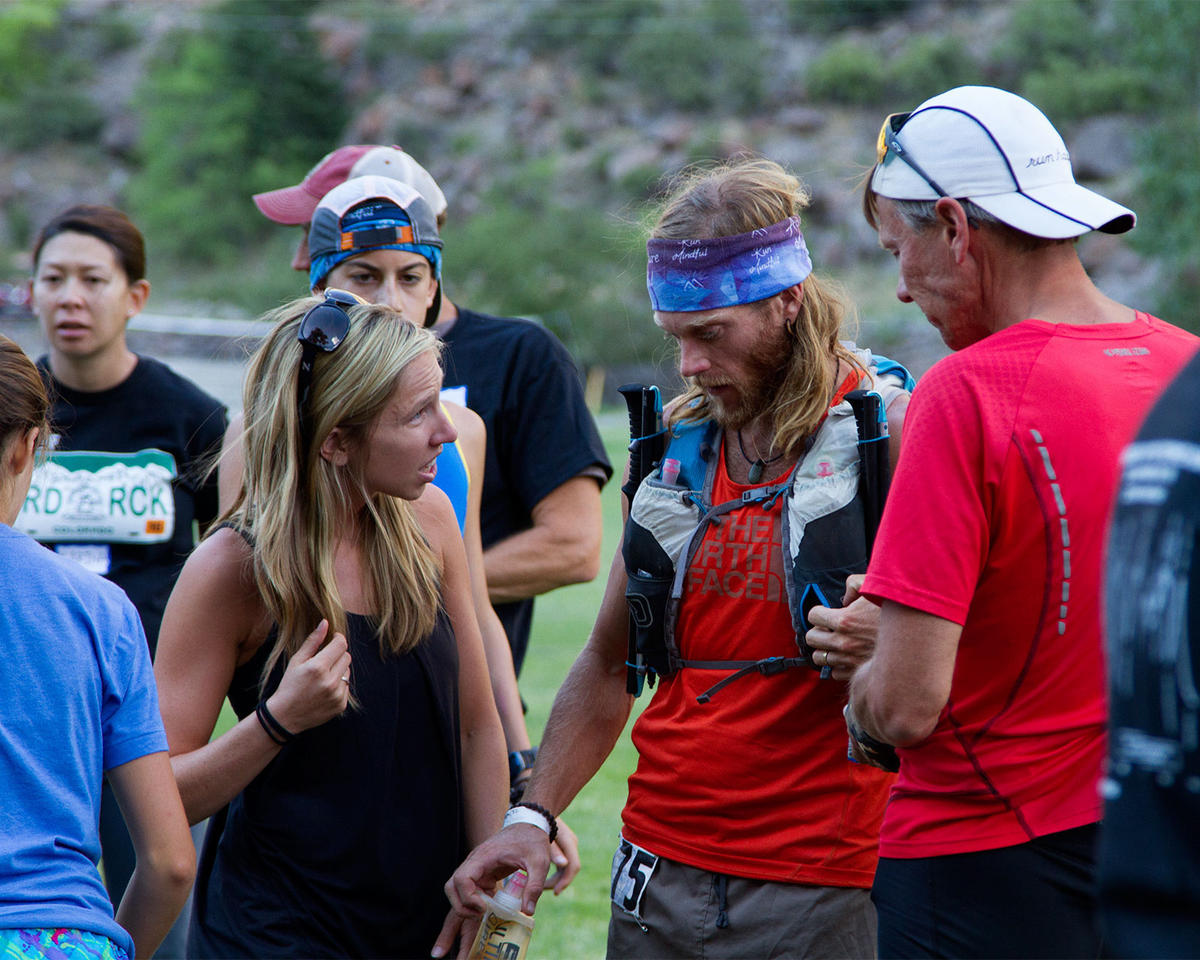 Timothy Olson takes a moment with his crew at the Ouray Aid Station. Olson finished 9th overall with a time of 31 hours, 53 minutes. 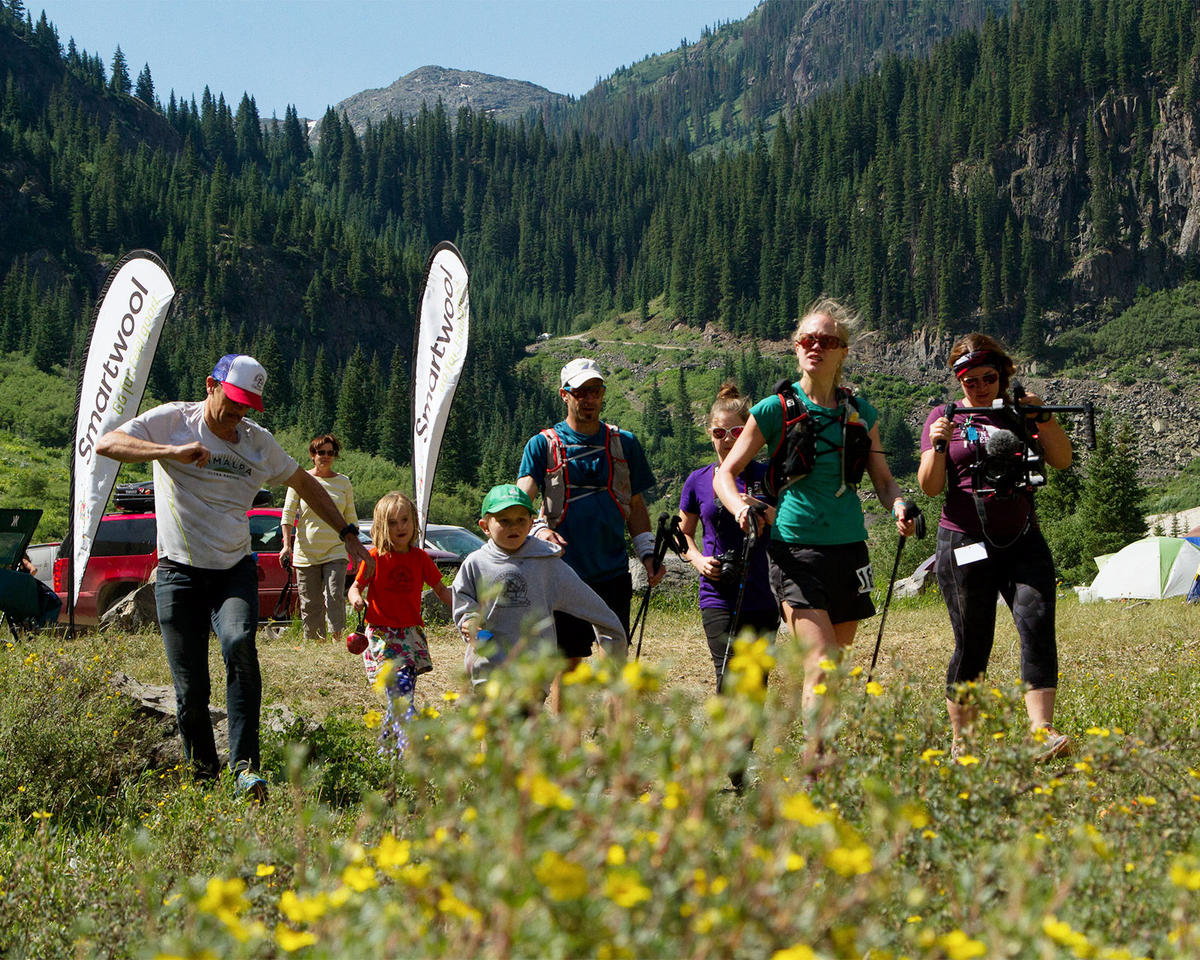 Bethany Lewis arrives at the Cunningham Aid Station at mile 91.2, the last aid station before the finish in Silverton. Lewis was the third female finisher, after Anna Frost and Emma Roca, with a time of 31 hours, 56 minutes.

Just before 5 a.m. on Saturday morning, only 22 hours after the racers left Silverton, the winners of Hardrock ran into the finish chute. Clutching hands, Killian Jornet and Jason Schlarb finished in a tie with a time of 22 hours, 58 minutes. They bent over and kissed the rock at the finish line, a custom followed by all Hardrock finishers. Jornet, last year’s champion, and Schlard ran the majority of the race together and agreed to finish in the same fashion. The top woman, Anna Frost, finished a few hours later, eighth overall, with a time of 29 hours, 2 minutes.

Hardrock is dedicated to the prospectors and miners who originally re-located to the San Juans in the 1860s in search of gold and silver. The course follows the foot trails laid out by the miners during this era. These prospectors climbed the same peaks and crags the Hardrock runners face during the grueling race. Instead of conquering a race and kissing a rock, miners climbed the mountains with dreams of discovering riches tucked in the crevices of the San Juans.