Sad news to report.Â Marvin “Henchi” Graves, one of the lead singers with Denver’s Freddi-Henchi Band, passed away this morning after a long battle with cancer. He was 64. From the band’s website:

It is with great sadness that I report that Marvin “Henchi” Graves passed away at around 10:00 AM this morning, June 8, 2009.Â Â Henchi fought a long tough battle with cancer for several years, far exceeding doctors’ expectations.Â Â The nickname Henchi was short for Henchman, which he earned from being an excellent wrestler.Â Â He was one step away from the Olympics when an achilles tendon injury forced him to change directions.Â Â This is what led him into the world of choreography and music.Â Â Henchi was tough all of his life right to the end, yet he was always a very nice person.Â Â Even on days when he was feeling his worst from cancer treatments he remained much more cheerful than one would expect.Â Â He always managed to make a joke or laugh about something.Â Â I sure will miss that laugh.Â Â We knew this day would eventually come.Â Â It just always seemed like it would be in the future and that itÂ would never really arrive. Â Henchi had many, many friends and it is a very sad day for everyone that knew him.Â Â The fans have always been a part of a Freddi-Henchi Band show and today I think we all lost a good friend.Â Â We will miss you Henchi, and you will never be forgotten.Â The world will not be the same without you here.Â Â Rest in Peace, my friend.Â Â We love you.

The popular R&B group was formed in Arizona in the 1960s when Henchi teamed up with fellow singer Fred Gowdy. After years on the circuit, the band settled in Colorado and was a long-time favorite for their high-energy shows. In recent years, they were regulars at Lannie’s Clocktower Cabaret, and just last summer, they tore it up at 5280’s 15th anniversary celebration. Here’s a Â picture from that great evening with (from left) guitaristÂ Bob Yeazel, Lannie Garrett, Fred Gowdy, yours truly, and Henchi on the right. 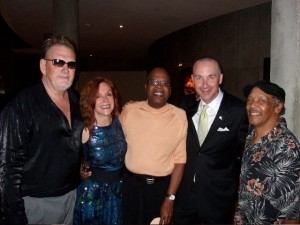 In his final weeks, Henchi got to enjoy a Nuggets-Lakers playoff game, thanks to the generosity of a local fan.