The next time you’re driving up I-70 after dark, make sure to glance in the direction of the Sculptured House (aka the Sleeper House) on Genesee Mountain; you might see a rather eerie glow being cast through the home’s iconic curved windows. The story behind the source of the light—one of Stapleton resident Matt Bliss’ luminescent Modern Christmas Trees—starts in the mid-1960s, right around the time that the Sculptured House was being built by celebrated architect Charles Deaton.

(Five things you didn’t know about the Woody Allen flick Sleeper, which was filmed in the Sculptured House)

Bliss’ grandfather, an engineer named Lawrence “Bud” Stoecker, was also constructing homes in the Rockies at that time—primarily the A-frame cabins now so fondly associated with mountain getaways. “Some of his are probably the ones you still see today,” Bliss says. Stoecker’s love for clean, functional, modern design didn’t stop when he was off the clock, much to the delight of his grandchildren, who spent Christmas Eves at their grandparents’ midcentury ranch in Broomfield. For more than two decades, Stoecker refined his design for a collapsible Christmas “tree” that hung from the ceiling. It was made using concentric circles, which he meticulously decorated with ornaments and garland, creating different patterns each year. 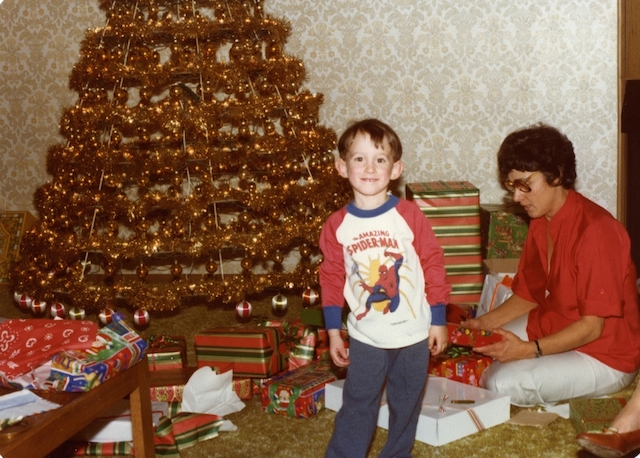 Pictured above: Matt Bliss at age five with one of his grandfather’s designs. Photo courtesy of Matt Bliss

Bliss rediscovered the tree in 2007 when he was helping his grandparents move to a retirement community, and asked them if he could keep it. In 2010, his grandfather’s Alzheimer’s diagnosis spurred Bliss, who was working in the mortgage business at the time, to think about sharing Stoecker’s unique design beyond his own home. He stripped it down, streamlining the aesthetic for contemporary tastes, and highlighted his favorite element: the way the chandelier crystals and ornaments cast shadows and reflected light from a spotlight at the base. The resulting product is his Modern Christmas Trees.

Three years on, Bliss now offers three standard sizes of trees in a handful of colors (in addition to custom orders): large 7.5-foot trees ($799), medium 6-foot trees ($499), and—new this season— 6-foot half trees ($299). This unique design also originated with Stoecker, who used half circles that arc out from the wall to reduce the amount of space needed to display the cheerful works of art. All the trees weigh less than 15 pounds, are easily mounted using drywall screws, and collapse flat for easy storage.

(Read about other alternatives to the traditional cut Christmas tree)

Today, Bliss’ business is keeping him busy well beyond the holiday season: Orders have poured in from Google’s corporate headquarters, California’s Disneyland Hotel, and private homes from Australia to Dubai to Ireland. The Denver Art Museum made a purchase. And there’s currently one on display at John Fielder’s Colorado on Santa Fe. Denverites interested in bringing this unique decoration home for the holidays can place orders (with free delivery) at Mod Livin’ on East Colfax or through Modern Christmas Trees’ website.

“The reaction has been amazing,” Bliss says. As the business continues to boom, Stoeker is never far from his mind—for every large tree that he sells, Bliss makes a $50 donation to the Alzheimer’s Association’s Colorado chapter (he estimates he’s raised around $10,000 so far). And he thinks his grandfather, who died in September 2012 just a week before Bliss secured his patent, would have approved of his latest photo shoot location: the Sculptured House. Bliss worked out a deal with the owner via Facebook to trade a couple of his trees in exchange for the access. “He probably drove by that house a thousand times,” Bliss says. “I like to think he’s looking down and smiling.”