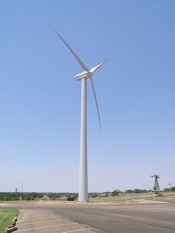 Governor Bill Ritter has signed into law a bill that requires state utilities to acquire 30 percent of their energy from renewable sources such as wind and solar power, writes The Associated Press, which notes that the voter-passed standard Ritter amended with the law was initially 20 percent. “This is a commitment to clean energy that is unparalleled in this country,” says the Democratic governor. “From the perspective of energy security, environmental security, and economic security, we should push the envelope on renewable energy.” Though he’s likely overstating Colorado’s effort, it’s clear the state is among the most aggressive when it comes to pursuing renewable energy. California’s rule, points out The New York Times, requires big utilities to take 33 percent of their electricity from renewable sources by 2020. A spokesman for Xcel Energy, which serves about 70 percent of Colorado’s population, says the utility supports the change. Craig Cox, executive director of Interwest Energy Alliance, a trade group for wind-power companies, praised the legislation, claiming renewable-energy technologies are the “growth industries of the 21st century: Colorado is well-positioned to gain thousands of new jobs, and renewable-energy industries will continue creating local economic development benefits, especially in rural areas that need new economic opportunities” (via the Denver Business Journal).