It’s been six years since Colorado legalized marijuana for recreational use, but for more than 10,000 people in Denver, it feels a bit like legalization never happened. That’s because before the new laws went into effect, they were convicted of low-level marijuana offenses—actions that would be legal now—and, as a result, may still be struggling to find employment, pursue higher education, or otherwise move on with their lives.

Thankfully, a solution has finally arrived.

In January, the City and County of Denver launched Turning Over a New Leaf, a program that streamlines the process of getting such convictions vacated and sealed (unlike expungement, where a conviction is erased, these convictions will still be visible to law enforcement and in deeper background checks, though successful applicants can say they have no convictions on their records). The initiative is a collaborative effort between Mayor Michael Hancock, and the offices of the Denver District Attorney and City Attorney.

“Given the fact that possessing a small amount of marijuana is now legal in Denver, it appeared that in the interest of fairness and justice, it would be appropriate to allow people who had those kinds of convictions in their past to have them vacated and sealed,” says Denver District Attorney Beth McCann. “It seemed like it was the right thing to do.”

The Denver DA and city attorney have has identified approximately 13,000 people who could fit the qualifications, which are:

Those who qualify can apply to have their convictions vacated and sealed using a simple online application (available in English and Spanish); they’ll need to know the date of their conviction, case number, and charges.

Or, they can bring a completed application and government-issued photo identification to one of the four free clinics scheduled in February and March around town. There, staff as well as immigration and criminal defense attorneys will be on hand to answer questions, address concerns, and review cases. McCann emphasizes that those with uncertain immigration statuses or other legal concerns can attend without worry. “We’re not interested in doing anything other than helping them get the marijuana conviction vacated and sealed,” she says. “This won’t have an immigration focus at all. [And] we certainly are not going to be arresting them if they have another warrant outstanding. That’s not the purpose of this.”

Applications will be reviewed by the city or district attorney’s office, and if they pass all the requirements, the appropriate attorney will file a motion, and the presiding judge will rule on the case without a hearing. If the judge agrees, the conviction will be vacated, the charges dismissed, and the case sealed, and the applicant will be notified. The process is expected to take no more than a few weeks.

All court fees have been waived, so the process is free for applicants. (One caveat: The Colorado Bureau of Investigation may have a record of the conviction, and if someone wants that copy sealed, he or she may, according to McCann, have to pay a $28 fee directly to CBI.)

Denver’s program follows a similar effort—Moving On From Marijuana—that was announced in Boulder County in late November. “This is the one charge that I’ve seen in my career that we were criminally prosecuting and is now entirely legal,” says Boulder County District Attorney Michael Dougherty. “Since Colorado took the fairly exceptional step of legalizing marijuana, we view the collateral consequences of convictions for prior marijuana use unfair. They make it difficult or prohibitive to getting jobs or into school for conduct that would be completely legal today,”

Dougherty’s office identified around 4,000 cases that could be eligible to be vacated and sealed; a couple dozen have successfully gone through the process so far. The program is available to those convicted of low-level marijuana offenses going back to 2002, and, like in Denver, the fees have been waived. The Boulder County DA’s office hosted clinics in January but now has an online application that can be filled out and then emailed to kkupfner@bouldercounty.org.

Both Dougherty and McCann see these initiatives as possible stepping stones to a broader expungement process, inspiring legislators to pass a statewide bill, or for more counties to follow suit.

“I’m proud of what the DA’s office and the city of Denver is doing on this. It’s good first step,” says Christian Sederberg, founding partner of Vicente Sederberg, a national marijuana law firm whose Denver office is assisting with the local clinics. “I think the logical next step is to address this statewide to whatever extent we can. Now that we’ve changed our laws and there’s a different policy approach, it’s incredibly important to look backward and undo things we can undo that continue to impact people negatively.” 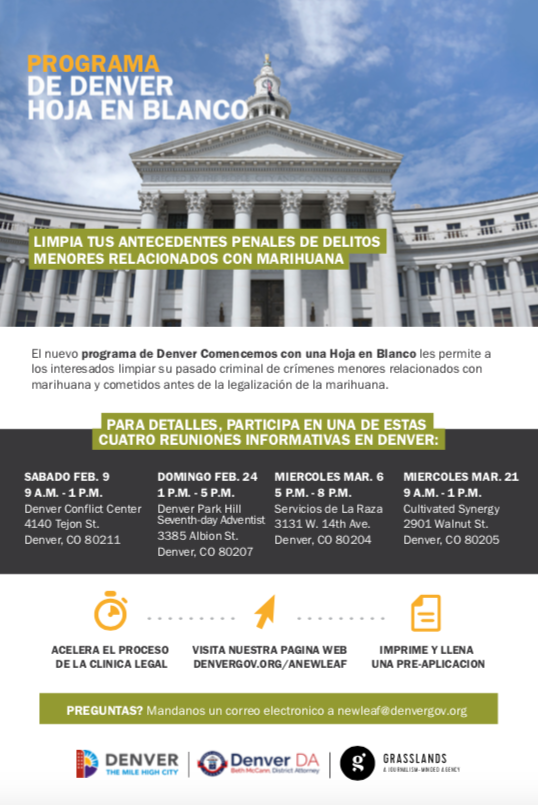 Questions? See if it’s answered in the FAQs, or contact newleaf@denvergov.org.