Luncheon of the Boating Party (re-creation) 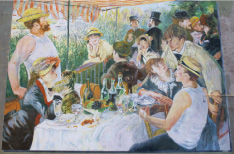 Find it: 15th and Market streets

Chris Krieg of Evergreen once regularly painted murals to help advertise the Denver Art Museum’s collections. The gig dried up, but Krieg’s take on Renoir’s Luncheon of the Boating Party remains. It took Krieg 20 days to re-create the French impressionist’s masterpiece—an effort that, sadly, covered up four of Krieg’s previous murals. Its original vibrancy has faded because of Colorado’s unrelenting sun, but the painting is still a nostalgic remnant of DAM’s old-school advertising. 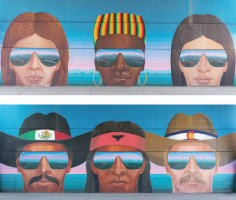 Find it: Viaduct under Speer Boulevard near Little Raven Street

Civic rights–minded muralist Emanuel Martinez of Morrison knows how redemptive the creative arts can be; he straightened out his own turbulent teen years through artistic pursuits and, a decade ago, hired 50 local students to help him complete this expansive work near Confluence Park. The mural, which received a facelift in 2008 for the Democratic National Convention, is both urban- and nature-themed to reflect the character of Denver, and captures the city’s ethnic diversity. 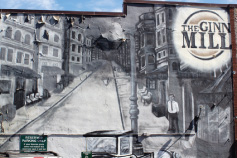 Find it: The Ginn Mill, Larimer between 20th and 21st streets

Jonathan Weaver had a huge blank canvas to work with when he opened this Ballpark-neighborhood tavern in 2007. When local painter Adam Moorhead created a montage of 1920s-style (think: flapper) “snapshots” for the bar’s interior, Weaver was so impressed by his handiwork with a can of spray paint that he commissioned Moorhead to turn the exterior wall into a similar Prohibition-era street scene—a perfect reflection of the bar’s old-time-watering-hole vibe.