There are many things to love about Kevin Morrison‘s Pinche Tacos, the taqueria with locations in City Park and Highland that began as a food truck. One of my favorite things about the cultish spot is that—like any home cook of Mexican food—the eatery takes the salsas as seriously as the tacos. Anyone can plunk down a bowl of salsa and a basket of chips, and walk away from the freebie with little concern for the response. At Pinche, however, you must order the starter; which is a self-selected sampler of three different salsas and warmed-to-order chips. All of the condiments are phenomenal, but here’s a guide to the choices, listed from mildest to hottest:

Pico de Gallo: With a name that translates to “pecked with a rooster’s beak,” this traditional salsa is minced fresh tomato, onion, and green serrano chiles.

Roasted Tomatillo: At Pinche, cooks roast the tart, green fruit and purée it with garlic, white onion, cilantro, and a touch of serrano (pictured above, at right).

Yessina Abuela: Named for a former cook’s grandmother, the recipe calls for boiling the classic combination of tomatoes, white onion, garlic, and serrano.

Salpicon: This crunchy combination of fresh radish, cucumber, red onion, cilantro, habanero, and lime juice is one of the eatery’s more inventive salsas (pictured above, center).

Casera: This staff favorite is the hottest of the bunch, made only with a trio of lime juice, white onion, and grilled habanero that sits in its own juices so the flavors meld (pictured above, at left). 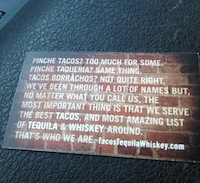 Did you know? Pinche Tacos has been plagued by naming issues since it first came on the scene in 2010. The city of Denver doesn’t like the name (“Pinche” is Spanish for the f-word), so Morrison changed the name to Tacos Borrachos. He also recently changed the website from pinchetacos.com to tacostequilawhiskey.com. Needless to say, some customers are puzzled by the discrepancy. “We have people walk in and say, ‘Oh, is this Pinche Tacos? I’m looking for Tacos Borrachos,’ ” Morrison explains. To help clear up the confusion, Morrison had this printed on his business cards: “Pinche Tacos? Too much for some. Pinche Taqueria? Same thing. Tacos Borrachos? Not quite right. We’ve been through a lot of names but, no matter what you call us, the most important thing is that we serve the best tacos, and most amazing list of tequila & whiskey around. That’s who we are.”