Good ol’ Will Shakespeare was certainly no stranger to a refreshing ale—in his time, it was cleaner and easier to preserve than water, which means he probably drank a lot of it. Denver’s the Wit Theatre Company is paying tribute to the buzzed bard with ShakesBeer, a collection of free alcohol-infused performances wherein the actors imbibe before and during—and probably after—the show. It results in more than a few mishaps, a lot of laughter, and quite a bit of spilled beer.

The productions certainly aren’t the stuffy Shakespearean plays you remember from eighth grade English class; the set and props are minimal, with the actors donning everything from brewery tees to studded vests and Hawaiian shirts, with comical foam swords tucked into their belts. The best part? They perform at local breweries like Ratio Beerworks and Fermaentra, so you can sip a craft beer while you watch and get rowdy along with the actors.

The ShakesBeer series will celebrate its first anniversary in August, and in that time the Wit has mounted successful productions of Much Abrew About Nothing, Twelfth Flight, and Romeo and Brewliet, which will have an encore performance at Fiction Beer Company on July 10 at 2:30 p.m. It’s part of the ShakesBeer Summer Rewind, which features performances of all the shows they’ve produced in the last year at various locations around Denver, including Ratio Beerworks, Fiction Beer Company, and Thump Coffee.

We caught up with Nick Kemner and Adeline Mann, artistic director and artistic development director, respectively, of the Wit to learn more about the company’s boozy odes to the famous playwright. The two also act in the Wit’s productions and were featured as Tybalt and Juliet in their most recent adaptation of Romeo and Juliet. 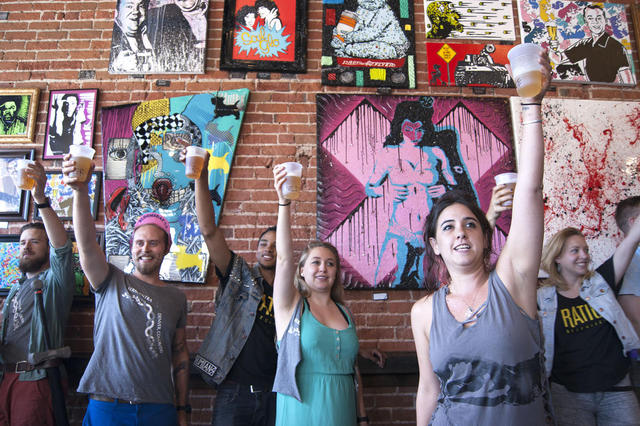 5280: Where did you get the idea to do drunk Shakespeare productions?

Nick Kemner: ShakesBeer came up because one of our board members, Chris Arneson, had heard about S%@!-Faced Shakespeare, where essentially one person gets drunk and [the actor is] chosen at random. They get hammered and all of the other actors have to respond to them, which is really clever.

Adeline Mann: Around this time I did Eurydice with [the Wit] in spring of 2015, and throughout that summer we were chatting about Shakespeare and how stuffy it is. Then in August I went to the Fringe Festival in Edinburgh and I saw a drunk Shakespeare that was not very good where it was one actor getting drunk and the rest of them sort of adapted. It felt like a show rather than an event. We decided, let’s do something fun like this with this group of people that we enjoy working with, but better.

NK: The idea was that while it’s funny to see one person get really hammered, it’s more fun to see an entire group of people get buzzed or tipsy, because then everyone is on the same level and they can draw on the audience because they’re essentially creating a culture for the audience. It’s honestly what we were already doing anyway; we would have meetings and get together and drink and espouse ideas.

NK: It’s structured as two weeks of normal rehearsal, and then a week or a few days of drunk rehearsal to see what comes up, what things are harder when intoxicated. However, usually drinking happens throughout regardless, especially after rehearsals. It’s more like casual drinking the first two weeks and then hard drinking the last week. Serious drinking. 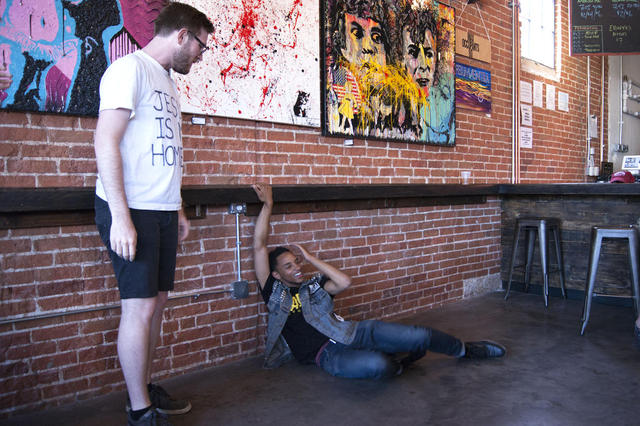 What’s the funniest thing that’s happened during one of your performances?

NK: At the first Fermaentra show [for Romeo and Brewliet], the very first scene is the initial scuffle to introduce the feud, and one of the Montagues accidentally knocked over one of the Capulets’ beers and spilled his entire beer all over the floor. And the Capulet was just like, oh no! I have no beer! And it initially established that mistakes are going to happen and anything can happen in this performance. The audience just lost it, and [the actor who spilled it] was sort of embarrassed afterwards, but in reality it freed the audience to realize the craziness of it and that things are just going to happen. It’s so interesting to see how the actors and the audience are going to respond to it.

AM: We really, really embrace those “mistakes,” which I wouldn’t even call mistakes because it’s not us setting up a bit, stuff is literally just happening all the time. It’s welcoming the audience by saying look, mistakes happen and we’re just going to keep going. And we’re not intending to spill this beer, but we’re going to deal with it now that it has been spilled. 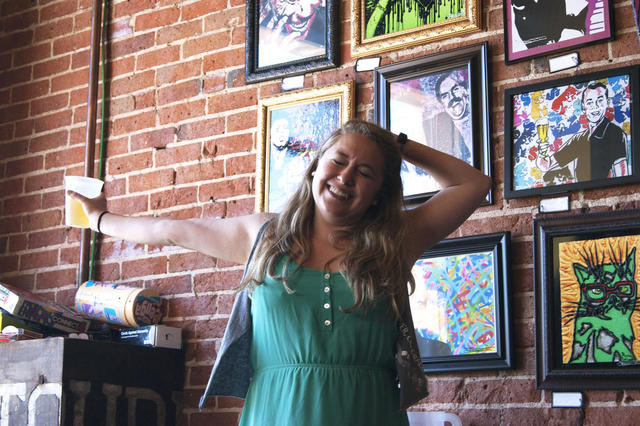 How would you compare ShakesBeer to “traditional” Shakespeare?

AM: Shakespeare’s actors were wearing contemporary clothes for their time period.

NK: In Julius Caesar they reference a doublet rather than a toga. And that’s really what we’re doing, too.

For updates on future ShakesBeer productions from the Wit, check out their Facebook page.

—All photography by Meg McIntyre