Without any big-ticket bouts between Republicans and Democrats, the November 3 election is mainly about the state and city governments asking to spend your money. The costliest wish on Denver’s list: turning the National Western Complex and Denver Coliseum into a year-round tourism and educational hub called the National Western Center (NWC). The city wants to permanently extend the current 1.75 percent tax on hotel rooms and car rentals, set to expire in 2023, so it can kick in $476 million toward the $856 million venture. (That’s for its first two phases.) Most of the rest would come from state tourism funds, the National Western Stock Show, and Colorado State University, which plans to build a veterinary clinic at the NWC. The biggest projects include a new stockyards facility and an equestrian center as well as cleaning up the South Platte River and making infrastructure improvements in the adjacent Globeville and Elyria-Swansea neighborhoods. The problem with public arenas like the proposed NWC, says the Washington, D.C.–based Brookings Institution, is they don’t add much economically to their metro areas because they divert spending from one local venue to another. But NWC backers claim the center would bring in nearly $6 billion from out-of-metro visitors over 30 years. To put that into context, we calculated the annual revenue some of our priciest publicly funded entertainment venues bring into the region by multiplying their estimated yearly out-of-market attendance by what an average visitor spends in Denver per day ($117). By our math, the NWC would make cattle king for the foreseeable future. 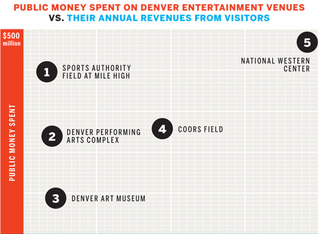 Note: All figures have been converted to 2015 dollars. | Sports Authority Field at Mile High: Based on the 25 percent of season-ticket holders who live outside the metro area. (Season-ticket holders make up 90 percent of total ticket sales.) | Denver Art Museum: Only includes the Hamilton Building. | Coors Field: The Rockies estimate 30 percent to 40 percent of attendance comes from outside the metro. We calculated out-of-market spending at 35 percent. | Sources: Denver Broncos; Visit Denver; ESPN; City and County of Denver; Denver Center for the Performing Arts; Colorado Rockies; Denver Art Museum