After 12 days, 250-plus films, and a bevy of panels and parties, the 38th annual Denver Film Festival (DFF) wrapped on Sunday night. Of this year’s 43 titles with Colorado ties, local writer-director Arnold Grossman’s feature-length indie-drama, The Boat Builder (produced by Richard J. Bosner, Fruitvale Station, The Wannabe), commanded the spotlight across five sold-out screenings over the festival’s second weekend.

Grossman, 81, makes his directorial debut in this family-friendly portrait of an unlikely friendship between a crotchety former Merchant Marine (Christopher Lloyd) and a young, embattled orphan boy—played by newcomer actor and part-time Denver resident Tekola Cornetet (age 12). Both plagued by painful pasts and uncertain futures, the pair finds comfort and kinship while priming a dilapidated sailboat for seaworthiness.

With so much local expression in The Boat Builder’s genes, we took to the red carpet of the film’s fifth and final DFF screening at the Sie FilmCenter on Sunday night to ask the talent about their most memorable Colorado experiences. 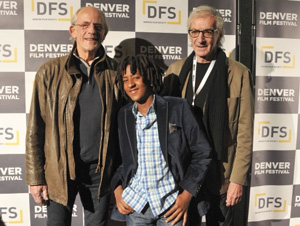 “I did a film here so many years ago called Things to Do in Denver When You’re Dead (1995), and it was a wonderful cast; a strange, wonderfully written script; and we filmed in locations all over the place. It was just before the new stadium (Coors Field) was built. It was just a great experience, and I have a lot of memories of the city and the film. Then years and years ago, way before that, I stayed in the hotel we’re staying in tonight, The Oxford. I don’t even remember why I was in Denver (laughs).”

“[Most of my memories] would come, of course, from my personal life, my family life: Watching my three children and now five grandchildren stay here in Denver and have their own careers and grow and thrive—that’s just as a father. But as a professional, it’s hard to pick one thing that’s memorable about being in Denver. Going way back, when Denver had an opportunity to have the Winter Olympics here, some people got together and did something that was very risky: after the Winter Olympics were awarded here, they said, ‘Maybe this isn’t the best thing for Colorado. Maybe it would have a toll on the environmental quality of our state.’ And I’m not really taking a side in what that issue was, because I think it was fairly contentious. In retrospect, when I look back, [there were] people in this state who were willing to do something to ward off something that could’ve really taken away the magic of Colorado—or, if not taken away, but done something to perhaps diminish it a little bit. And they chose to preserve the quality we had here. Was it the right choice? I don’t know, maybe it wasn’t. But it was very interesting to see this state do that. I think people [here] are willing to take chances so that we won’t suffer some of the consequences that other states have, that have not been able to handle growth issues, that have changed—not necessarily for the better. I think Denver has grown and changed very much for the better.”

(Read our guide to the 2015 Denver Film Festival)