Like judging boxing, gymnastics, or ice-skating, scoring the health of a forest is subjective. And until recently, there wasn’t even a set of agreed-upon rules. This year, though, the Aspen Center for Environmental Studies (ACES) released a “grade book” for assessing arboreal fitness: the Forest Health Index, which uses a set of ecological, climate, and socioeconomic indicators to rank forests on a 100-point system. “Adequately understanding and responding to the changes our forests have undergone in the past few decades will be a critical challenge for conservation and resource management,” says Chris Lane, CEO of ACES. 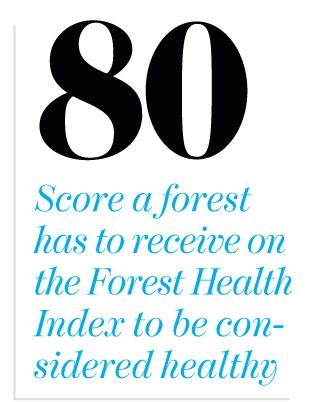 The inaugural index ranked only the nearby forests of the Roaring Fork Valley, but ACES hopes to see the system adopted by forest managers across the nation. Scientists weighed about 20 factors—among them air quality, frost-free days, high-elevation snowpack, and insect and disease infestation—before bestowing the Roaring Fork Valley with a score of 78, which means the forest shows some signs of sickness. (Scores at or above 80 are deemed healthy.) The area’s 100 days of high risk for forest fires helped drag the score down; conversely, the wilderness around Aspen received high marks for having fewer days of extremely low temperatures, an important indicator of climate change.

Other metrics considered by the Forest Health Index include a category pertaining to public health and safety measures. When it comes to sustainability, examining how much use a forest sees from the likes of skiers and mountain bikers is another important point, according to the index’s creators. Aspen scored a reasonable 77 in this area, though the continued increase in visitors to the Maroon Bells area could become a cause for concern.

Any community can use Aspen’s model, combining it with local data, community-defined goals, and economic priorities. For instance, a city like Steamboat Springs, which has seen fire, beetles, and the effects of two coal-fired power plants in its valley, might tweak the formula by placing more weight in certain categories (for example, sustainability or ecological integrity). Drought-stricken Durango might focus on different factors, like annual precipitation.

Aspen’s second index score—set for release early in 2015—will include new data points such as soil moisture measurements from the National Water Climate Center. “The benefit of this type of thing is not a number, a score,” says James Arnott, program director of Aspen Global Change Institute, the lead scientific consultant in developing the index. “It’s a window into important variables that are relevant to understanding your local environment in different ways.”