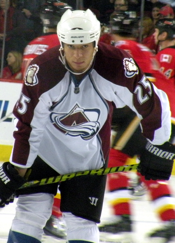 Don’t look now, but the Avalanche have built some major, middle-of-winter momentum following a very successful weekend that included two more wins. On Friday night, the Avs held off the Nashville Predators, 2-1, in what Colorado defender John-Michael Liles calls “an ugly win” (via The Denver Post).

Goalie Craig Anderson again played sharp, and the decision put the Avs back in first place in the National Hockey League’s Northwest Division. Yesterday, the Avalanche piled on their season-high sixth straight win, this time overwhelming the Dallas Stars 4-0 in Denver.

Forward Chris Stewart (right), who had a goal and an assist against Dallas, tells NHL.com defense and goaltending are the keys to the team’s recent run: “We’re all buying into a team defense here and blocking shots and doing whatever it takes. The times where we’ve slipped up a couple of times Andy’s been standing on his head, doing his job.”

The impressive weekend means the Avs reached 30 wins in the quickest number of games (51) since the 2000-01 squad, which did it in 47 games (via NHL.com). That year’s team also went on to win the Stanley Cup.

But not all of the Avs’ numbers are so hot. Despite perceptions that the team offers relatively cheap tickets, writes The Denver Post’s Terry Frei, Colorado’s prices fall in the middle of the pack in the league, ranging from $25 to $216 for a seat.