Andrea Hughes wakes to the chime of her cell phone’s alarm clock. She rolls out of bed and walks to the kitchen to grind some coffee. After pulling back a curtain to watch the sun rise, she sits down in front of her laptop, cup of joe in hand, ready for an 8 a.m. conference call with her employer, a public relations firm. Andrea’s Monday morning is not unlike that of the other 3.7 million Americans who work from home—except that her home is an Airstream travel trailer.

Andrea, 36, and her 39-year-old husband, Seth, a commercial photographer, are part of a small but growing subculture of so-called “digital nomads.” Enabled by modern cellular data technology and high-speed Wi-Fi, these professionals can work from anywhere, so they choose to live everywhere. Denverites for nearly 13 years, the Hugheses decided to put their townhome in the Highland neighborhood up for rent in 2014, sold their cars, and moved with their dog, Emma, into a 25-foot Airstream. In three years’ time, they’ve traveled up the West Coast to Alaska and south to Baja California, Mexico; wintered in California and Arizona; taken in the culture of New Orleans; and followed the Eastern Seaboard north to Canada—all while maintaining full-time jobs.

“This is the life that we always wanted, that we felt we were missing out on by living static, in a single location,” Seth says. “We didn’t want to wait until retirement.” While the pair remains tied to Colorado as a home base for their health-care needs as well as for some of Seth’s photography clients (including this magazine), they are free to live and work wherever they can get a strong enough cell signal to connect to the internet.

For some Coloradans, particularly those who leave town every weekend to mountain bike in Fruita or make turns in Breckenridge, the arrangement might sound like a dream. At the very least, it would mean not having to suffer Sunday afternoon gridlock on I-70 to ensure you’re at your desk come Monday morning. At the very most, having your passenger seat double as your desk chair could foster an unprecedented work-adventure balance—chasing world-class outdoor recreation year-round. (Think: surfing Southern California in the summer and, come winter, skiing Colorado…or Utah or Wyoming, depending on the snowfall.) And if Instagram is any indication, a heck of a lot of people are inspired by the idea of living on and working from the road. In the three months it took to research and write this story, the following of @vanlifediaries—an Instagram account co-founded by two Australian van-dwellers who curate photos of live-in vans and their owners worldwide—increased by more than 60,000.

The romance of an itinerant lifestyle is undeniable, but there’s a difference between following the concept on social media and actually living it. Beyond the obvious challenges of squeezing your entire life into less than 200 square feet, turning an old conversion van into a functional Wi-Fi hot spot requires a decent amount of tech savvy. And we’re not just talking about configuring hardware to increase your cell phone signal strength or connecting solar panels to your vehicle’s battery to power your devices and your refrigerator. No, digital nomads must also be able to navigate apps like Ultimate CG, which locates Bureau of Land Management and U.S. Forest Service lands with free camping, and then cross-check the locations with online data coverage maps—which aren’t always accurate—from their cell phone service providers.

It’s all easier said than done, especially if your boss is keen on you being present for the Tuesday morning staff meeting. Which brings us to what is likely the most difficult aspect of roving while working: getting an employer to sign off on the idea.

Although Colorado employers have enthusiastically embraced telecommuting—according to a recent study by FlexJobs, the percentage of Centennial Staters who telecommute full time is 6.9, the highest in the country—the assumption is employees are working from a desk in their homes and could pop into the office for a meeting if absolutely necessary. “I think the biggest challenge, from an employer perspective,” says Kelly Brough, Denver Metro Chamber of Commerce president and CEO, “is the same one you see across all other forms of telecommuting—enabling the collaboration that a decade’s worth of studies has proven essential for creativity and innovation.”

The tech sector, which has pushed Boulder’s telecommuting rate to 10.6 percent, among the highest percentages for U.S. cities, is perhaps the most obvious place for digital nomadism to flourish. But even there, the concept is considered fringe, with smaller companies and startups more likely to embrace it (or at least give it a try) than the IBMs, Oracles, and Lockheed Martins of the world. “Our philosophy is if you’re amazing, we want to hire you, no matter where you are physically located,” says Kelli Ward, a recruiter at Stack Overflow who’s based out of the company’s 40-person Denver firm. Stack Overflow, which also has offices in New York City and London, uses a variety of techniques—such as conducting all meetings involving a remote employee virtually and encouraging what it calls “bev bashes,” during which employees share drinks over their screens using Google Hangouts—to ensure its 75 remote employees feel included. And while none of Stack’s employees have worked from an Airstream (yet), Jon Chan, a developer, spent three months working remotely from hotels, Airbnbs, cafes, and co-workers’ guest rooms while scratching his travel itch in 22 cities across seven countries in Europe and East Asia. 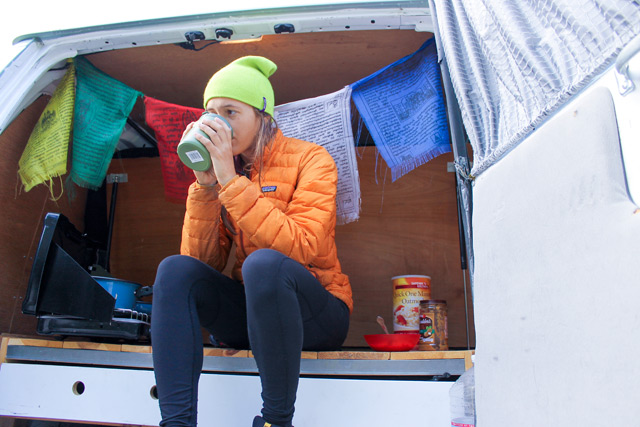 Other companies are learning about digital nomadism one pioneering employee at a time. Software engineer Naomi Plasterer is testing her company’s ill-defined boundaries (and perhaps pushing the limits of her employer’s good graces) by living in her van. She works for GitHub, a San Francisco–based firm with a 15-employee satellite office in Boulder. Although the company prides itself on its software technology, which (ironically) facilitates remote teamwork for GitHub’s clients, the tech company doesn’t officially allow employees to work from anywhere other than their homes, co-working spaces, or GitHub offices.

At first, Plasterer and her manager, who is based in Denver, didn’t think her unique remote setup would be an issue; her home office just happened to be a mint green 2000 Ford E-150 van. But the places Plasterer preferred to park—trailheads and rock-climbing sites near Lake Tahoe, Yosemite National Park, and isolated parts of Colorado’s Front Range—didn’t have strong enough cell coverage to allow weekly team meetings via video conferencing or permit Plasterer to maintain a reliable presence on Slack, an online collaboration tool the team uses during business hours. “I had this weird conflict of interest between the places I wanted to be,” she says, “and my ability to effectively work from those places.”

So Plasterer adapted. She began working from coffeeshops, mainly Starbucks (which has a partnership with Google to offer lightning-fast Wi-Fi)—but then her teammates complained there was too much background noise. The 23-year-old has since resorted to using co-working spaces during business hours. It’s a compromise that empowers Plasterer to keep her stimulating, well-paying job while living in multiple locations throughout the year. “There has to be a way to do both,” Plasterer says. “I just have to figure out how.” This coming winter, her second on the road, she’s decided to try another tack, at least temporarily: She’ll be signing a short-term lease on an apartment near Lake Tahoe. Because she’s concerned winter-driving conditions may make commuting to her co-working space too difficult, she’s willing to forego some freedom. That is, until the snow melts and she hits the road again.

The moral of Plasterer’s story may be that until cellular technology catches up with our four-wheeled offices (fingers crossed for satellite internet), the professionals best suited for mobile living are freelancers—people who can set their own schedules and don’t require constant online contact with co-workers—like graphic designers or web developers or, for example, photographers such as Kathy and Peter Holcombe.

In 2014, the Holcombes sold their Lafayette home and moved, along with their then 10-year-old daughter, Abby, and their Labrador retriever, into a 24-foot Winnebago View. “We were following the prescription for the American dream: Go to college, get a good job, get married, buy a house, have a kid,” Peter says, “but we still felt like we were missing something.”

Initially, the couple figured their family photography business, which focused on local weddings and portrait sessions, would take a hit as a result of their peripatetic lives (they’ve driven nearly 100,000 miles already). It didn’t. Instead, Holcombe Photography’s income grew. The company now counts significant commercial and editorial clients—including Winnebago, GoPro, Goal Zero, and Jackson Kayak, along with all of the major paddling magazines (the Holcombes are avid kayakers)—among its customer base.

The Holcombes believe their business success has been due, in large part, to the attention they’ve received on social media for their #digitalnomad lifestyle. “We’re living our values of exploration and adventure and sharing it with the world while making more and spending less,” Kathy says. “It’s been incredible.”

Still, there have been challenges—like managing a modest 36-gallon tank of water for a family of three and coping with a major living-space reduction (from 2,700 square feet to 192). But those challenges were minor inconveniences when compared to the Holcombes’ concerns about their daughter’s ability to adapt to life on the road. Fortunately, she’s flourished too. Both Abby and her parents believe her online education curriculum is far better than her former classroom instruction, and the now 12-year-old has spent time in 49 states, amassing a rich variety of life experiences, including speaking in front of 150 people at the Winnebago Grand National Rally in Forest City, Iowa, about her travels. “She was always so shy,” Kathy says. “Now she’s confident and charismatic.”

Originally the Holcombes planned to spend one year on the road and then move to Buena Vista to resume traditional living. That was nearly three years ago. Like many digital nomads, the family has learned how to deal with the logistics of mobility—from doing laundry on the fly to disposing of sewage—and find it a small price to pay for the adventure of the open road. So it should come as no surprise that, as of right now, they have no plans to return to the land of stationary living.

The essentials you’ll need for life on the road.

Websites
Campendium.com: Reviews and beta on camping spots, from BLM sites to private campgrounds and everything in between. Camping can be filtered by price, and reviews have cellular service details.
Freecampsites.net: Listing of free campsites, including crowd-sourced spots that can’t be found elsewhere.
Boondockerswelcome.com :Information on private-property owners who don’t mind hosting nomads for a day or two.
Harvesthosts.com: Opportunities to camp on a vineyard or farm and trade labor for rent.