The 10th—and final—run of the day unfurls below me. During the nine previous descents, I hadn’t been the fastest, most aggressive, or prettiest rider on the snow, but I was probably the most grateful.

After all, my chance to experience Irwin, a legendary backcountry spot near Crested Butte, had been a long time coming. In the early 2000s, I was a twentysomething newlywed, traveling Colorado with my new husband. We were yet to be tethered by children, free to ride whichever mountains we pleased—except for the one we really wanted to experience.

Stepping out of the 10-person, leather-interior, Snickers-bar-filled snowcat, I leave behind the sounds of Jay Z to greet those of hard-packed snow squeaking beneath my boots. With my board in hand, I trudge the final few feet to the top of Scarp Ridge and, while the rest of my group stomp into skis and strap on snowboards, I soak in the view. It’s late afternoon on a sunny, midwinter day. From where I stand, above the treeline at 12,000 feet, I can see a thick, white blanket of snow covering the Elk Mountains for miles. My eyes fall on Ruby Peak, Mt. Owen, and Purple Mountain. The wind is soft today; it’s cold on my face, but the sensation is more refreshing than chilling. I draw in the mountain air, close my eyes behind my goggles, and say a silent thank you to Mother Nature, to whoever invented the snowcat, and to a guy named Chad Pike for access to the epic terrain I am about to enjoy.

Located 12 miles outside Crested Butte, Irwin is the name used for both a historic mining township and a nearby 1,000-acre parcel of Forest Service land replete with wide bowls, beautiful glades, rolling hills, cliffs, and couloirs. The area is also blessed with an absurd amount of snow. In a weather phenomenon called orographic lift, the local topography traps air before forcing it to rise, cool, condense, and then snow. It is also the first range in central Colorado to connect with storms, which allows it to capture major moisture before the clouds move eastward. With 520 inches of snow recorded in the 2013-14 season (and regularly scoring 600 or more), Irwin logged 220 inches more than nearby Crested Butte Mountain Resort last year.

The town of Irwin, like so many present-day Colorado ski towns, was a silver-mining site, founded in 1880. Almost a century later, in 1977, Dan Thurman bought 100 acres of mining claims and built a 20,000-square-foot lodge, perched above 30-acre Lake Irwin, to accommodate a commercial cat-skiing operation on the surrounding land, which he leased from the Forest Service. Year after year, the epic conditions and relaxed vibe of Irwin Lodge raised the reputation of this snowy paradise to near mythic status. So when Irwin Lodge shut its doors in 2002 after 25 years, there were many who mourned its closing like the passing of a best friend. A year later, Archie Cox bought the property and gutted the lodge in preparation for refurbishment. The nearby snow remained mostly untracked, except by snowmobilers and seasoned backcountry skiers who knew how to navigate the narrow public access to the Forest Service land. When Cox abandoned his plan to turn the old lodge into a five-star resort in 2006, it fell into further disrepair. 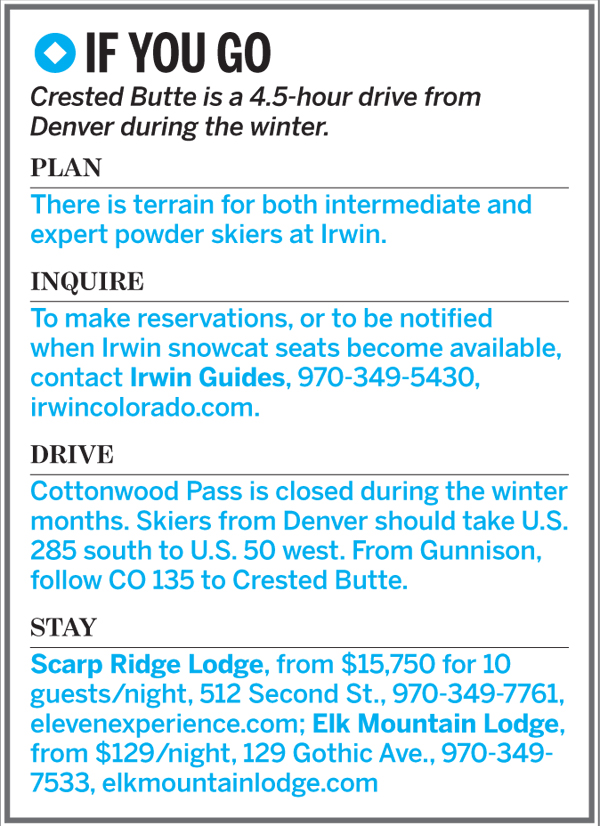 Enter Chad Pike, a 43-year-old London-based, American-born senior managing director and vice chairman of Blackstone Europe, the across-the-pond arm of the largest alternative-investment firm in the world. Inspired by an outdoor-adventure trip to Scotland, Pike began to look for a U.S. property where he and his guests could ski and fly-fish, his two favorite pastimes. For $3 million, Pike purchased Irwin Lodge and some additional nearby mining claims for easier access to the terrain and built small structures for vehicle storage and maintenance. Later he acquired the old Croatian dance hall and saloon in downtown Crested Butte, which he remodeled into the luxury retreat now known as Scarp Ridge Lodge.

With Pike’s investment, cat skiing at Irwin was revived in March 2010, led by a team of nationally and internationally certified backcountry and adventure experts called Irwin Guides, a company also owned by Pike under the banner of his expanding global resort brand, the Eleven Experience. During its first season, Irwin logged almost 1,000 inches of snow. It was an auspicious start.

But Pike didn’t reopen the 20-room Irwin Lodge. Instead, the majority of today’s Irwin skiers are guests at Scarp Ridge Lodge, a seven-bedroom inn that’s nearly always rented out by private groups during the winter months. Fortunately, hopeful cat skiers don’t have to forego paying their mortgages to rent out Scarp Ridge Lodge (from $15,750 per night for 10 people) to get a crack at Irwin. Would-be day riders can add their names to the Powder Cat List by emailing or calling Irwin Guides. If there’s an empty seat available and conditions are ripe, Irwin Guides will notify prospective skiers 24 hours in advance that they’ve won what amounts to backcountry skiing’s golden ticket.

On the morning of my trip, I was up in time to down some carbs before meeting the guides at 7:30. Day guests meet at the Irwin Building in downtown Crested Butte. A massive tracked vehicle—a Tucker Sno-Cat—customized with cushy leather seats, reclaimed wood cabinetry, and a TV, waited for us. Inside the cab, we watched a safety video; then, as the cat trekked up Kebler Pass, the big screen streamed live images of the landscape outside.

It took 45 minutes to reach our destination: the so-called Movie Cabin. Located just downhill from the old lodge, this log warming hut was built in the 1970s as a set for the Disney film Mountain Family Robinson, a story about a family that gets back to nature by homesteading in the Colorado Rockies. In the film, the cabin probably didn’t have a fridge. It definitely didn’t have Wi-Fi. Today, of course, it has both, and when we arrived there was also a roaring fire in the hearth and bowls of gourmet snacks on the table.

The fire inside was warm, but the snow above beckoned—as did a second snowcat waiting to transport us to the powder. The guides, who had happily outfitted my comrades with Wagner Custom skis as a part of the day rate ($650), are men and women who had at one time or another worked for the old Irwin Lodge operation, Crested Butte Mountain Guides, or in other on-mountain positions for which knowing the terrain really matters. Skilled and expertly trained, each one was picked for his or her personality, knowledge of the mountain, and ability to further the Irwin legacy.

Under Eleven’s ownership and through the expertise of its guides, Irwin has found new life. As for the old lodge, there soon will be new life there as well. Eleven Experience plans to restore the iconic hotel and turn it into a special-events space, where weddings, small conferences, and retreats can take place year-round—and introduce a whole new generation of people to one of Colorado’s most extraordinary places.

As I drop in over the lip of Scarp Ridge, I lean back on the tail of my board, point the nose straight downhill, and let out a whoop of unbounded joy. The grade is precisely what I need to maintain my speed, and when the right line reveals itself, I carve deep and long into the powder, creating a gorgeous arc. These are my last turns on Irwin, and I try hard to etch every moment of my descent into memory. As I approach the ice- and snow-covered Lake Irwin, where the cats await, I come to an exhausted stop and smile. I think about how long I’d waited to experience Irwin, about how young I’d been when I first was drawn to its legend. I realize, at that moment, Irwin was worth the wait.