One of the most exciting things about autumn is the return of college football season. This year, Colorado offers a bounty of enticing games at the state’s signature football stadiums. We hand-picked the top six matchups that showcase our unique blend of competition and culture. 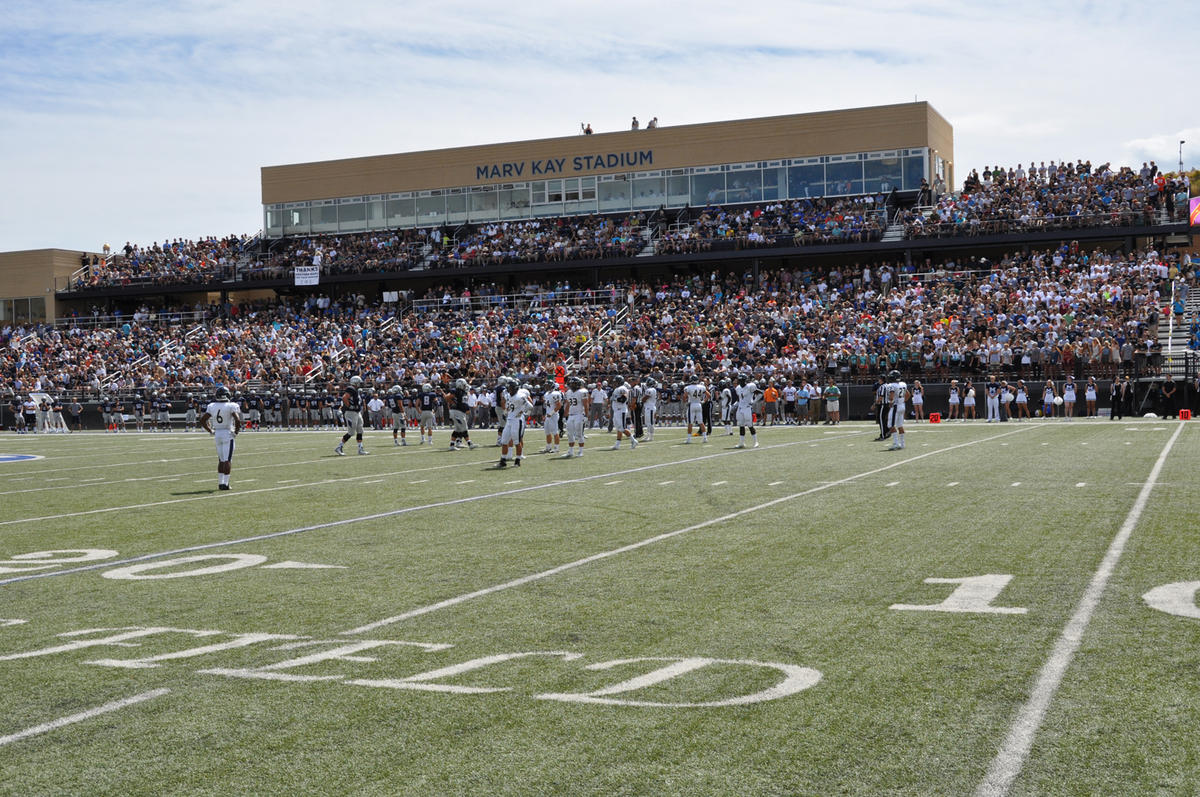 A game between two Division II teams could easily get overshadowed by some of Colorado’s Division I offerings. But make no mistake: This should be the most competitive game on this list, and it happens to be set in a beautiful, one-year-old stadium at the foot of Lookout Mountain in Golden. CSU-Pueblo, which won the D-II national championship two seasons ago, enters 2016 as the five-time defending Rocky Mountain Athletic Conference champion. But Mines is ranked 18th in the country and is looking to beat CSU-Pueblo for the first time in six years. An upset by the Orediggers wouldn’t be a bad way to bring a signature win to gorgeous Marv Kay Stadium—which, by the way, is reason enough to check out this game in person. 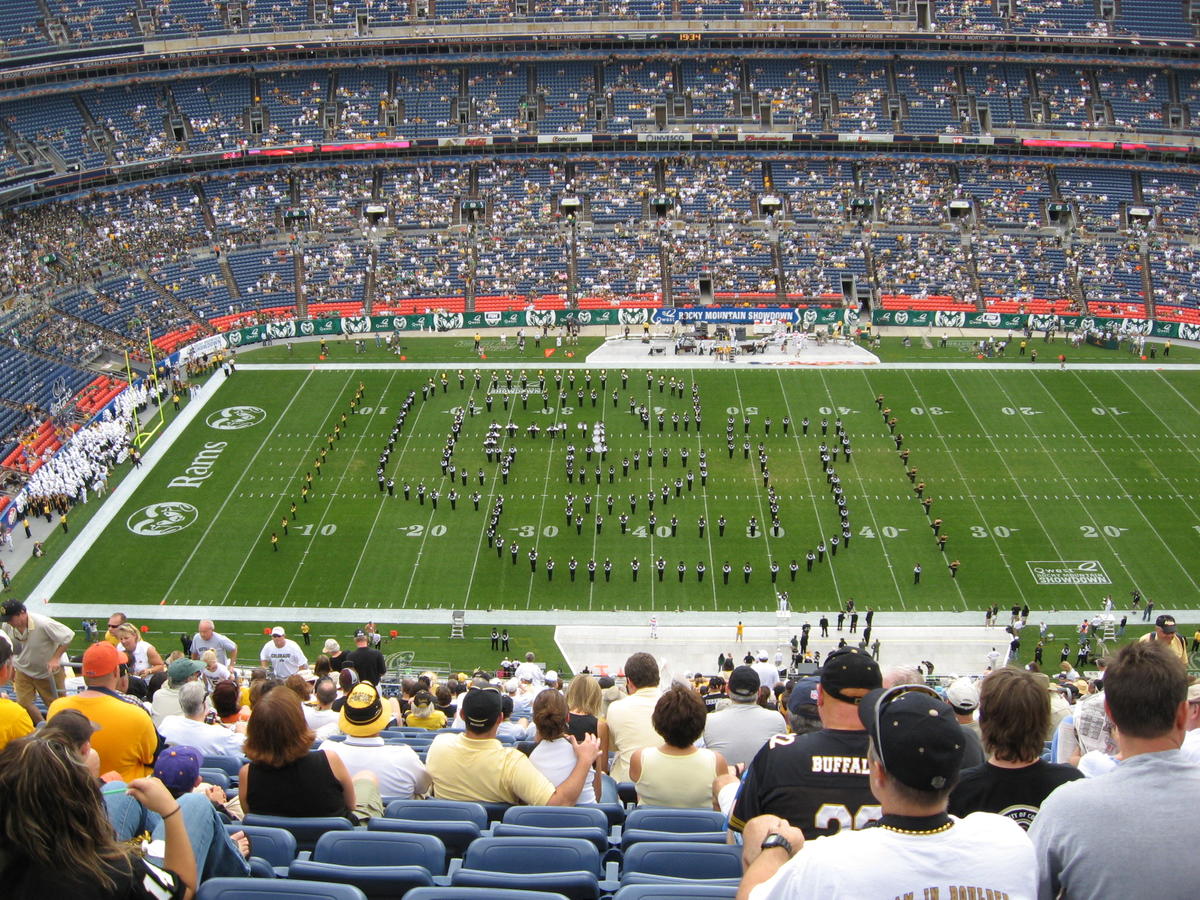 This “showdown” may not have the eye-popping talent of other college football rivalries, but it does have plenty of history. The series dates back to 1893, and for two teams searching for in-state bragging rights and an ever-precious nonconference win, it tends to bring out the best from the Buffs and Rams. Colorado returns the most experience they’ve ever had, and the team’s hopes of winning more than four games in a season—which it hasn’t accomplished since 2010—hinge on this game. Meanwhile, the bowl-hopeful Rams don’t want to suffer the black mark of losing to lowly CU. Most importantly, this will be your only chance to watch football at Sports Authority Field for less than $50 this fall.

Player to Watch: Chidobe Awuzie, Colorado defensive back. The senior is likely headed to the NFL Draft next spring and is one of the few bright spots in a weak CU defense. 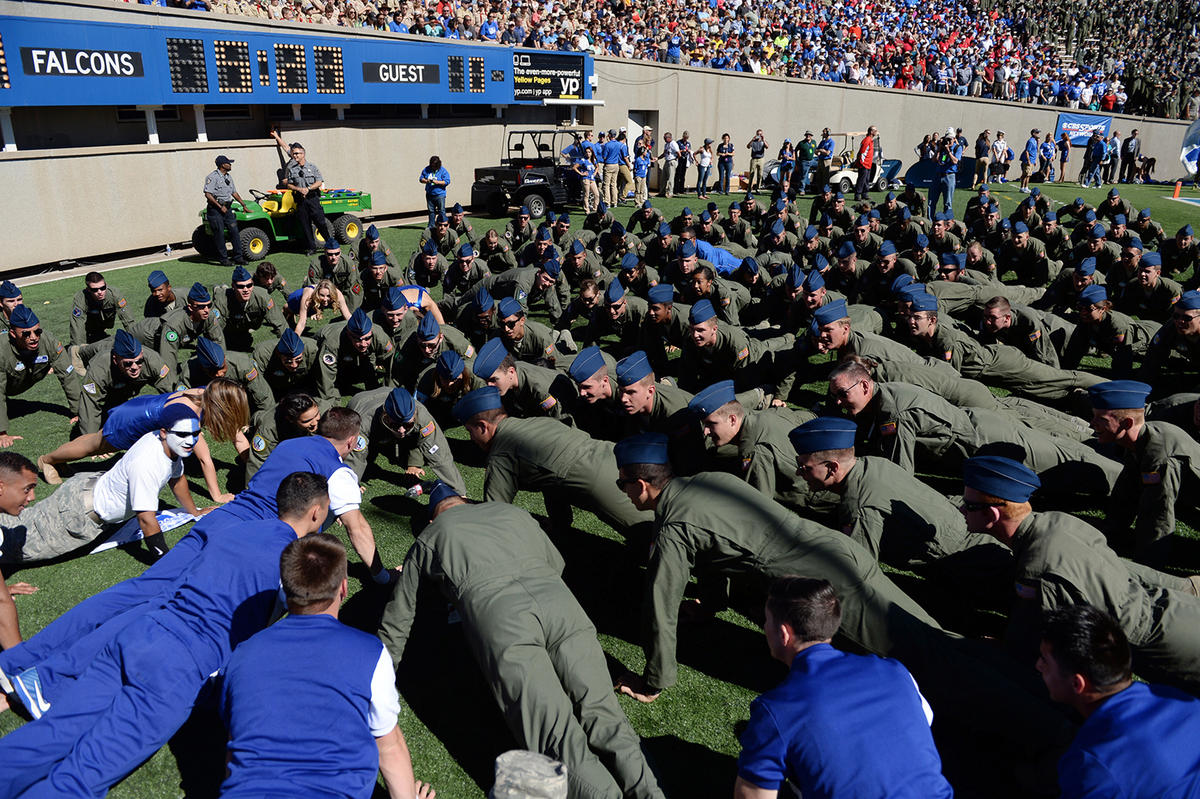 For any true college football fan, a game between two military academies is a bucket-list item. This one might be the best of the best. Gameday traditions at Falcon Stadium include two flyovers—one by fighter jets and another by the school’s mascot, a white phase Arctic gyrfalcon—as well as the entire student (cadet) population marching onto the field and filing into the stands. (Fun fact: Cadets are required to buy tickets for and attend each game.) Plus, freshmen cadets do push-ups for every Air Force point, starting over from zero after each score. But for those more interested in the game itself than the pageantry, both teams are have bowl game aspirations, and this matchup should be the deciding factor in who takes home the Commander-in-Chief’s Trophy.

Player to Watch: Weston Steelhammer, Air Force safety. The senior has accounted for more than half of the Falcons’ interceptions over the past two seasons. His name is pretty cool, too. 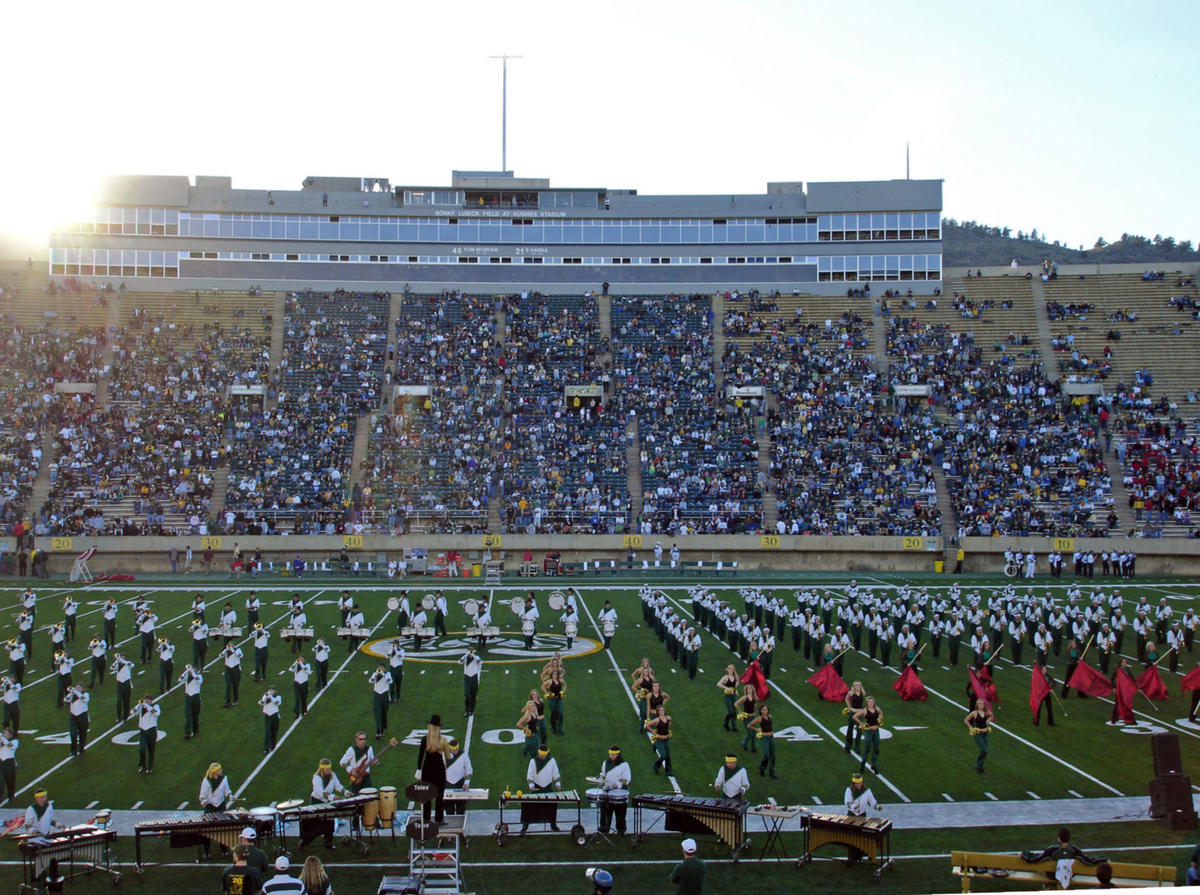 One of the final games at Hughes Stadium before the team moves to its new on-campus venue next year, this under-the-radar game could make or break CSU’s season. Utah State is projected to finish behind CSU in the Mountain West, but with a win, the Aggies could clinch a bowl appearance and send Colorado State to the bottom half of the conference and a spot in the no-account New Mexico Bowl. If CSU hopes to keep the upward trajectory of its program intact and honor Hughes one more time, this game is a must-win.

Players to Watch: Nick Stevens and Faton Bauta, CSU quarterbacks. It’s a toss-up which one of these signal-callers will be starting this game. Stevens played well last season, throwing for 2,679 yards, but Bauta has also shown some promise after transferring from Georgia. Freshman Colin Hill is in the mix, too. It’s hard to include a Northern Colorado team that has finished in the bottom four of the Big Sky Conference for three straight years. But the real draw of this game isn’t the Bears, who are likely headed for another poor—let’s not kid ourselves—last place finish this year. Focus instead on the Montana Grizzlies, an FCS (formerly Division I-AA) powerhouse that could battle for a Big Sky Championship this year. If anything, this game will give you perspective on what real college football looks like, only in a smaller stadium, with a team eyeing a national championship rather than just a bowl game.

Player to Watch: Jacob Knipp, UNC quarterback. Knipp had a breakout game against the Big Sky’s Eastern Washington last season, and he’ll need to turn in a similar performance to compensate for UNC’s feeble defense. 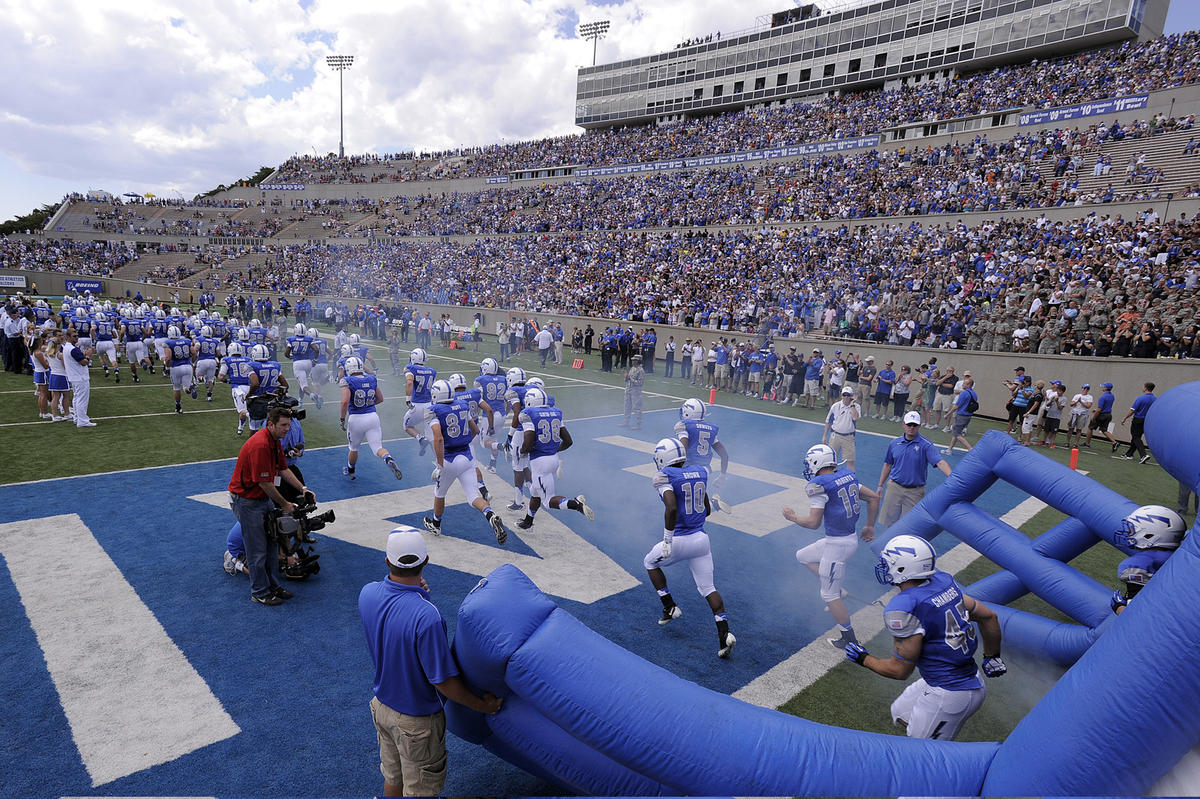 If the other games on this list were the appetizers, this is the mouth-watering main course. Last year, an upstart Air Force squad knocked off the Broncos in Boise—a win that propelled the Falcons to their second-place finish in the Mountain West. This year, a retooled Boise State team brings back All-Conference quarterback Brett Rypien and star running back Jeremy McNichols, who scored 26 touchdowns in 2015. But if Air Force can pound the Broncos with its signature run-heavy offense, a Boise State loss would likely knock the team out of contention for the College Football Playoff.

Player to Watch: Jacobi Owens, Air Force running back. The Falcons run the ball so much that it’s hard for one ball-carrier to stand out. But somehow Owens did last season, rushing for more than 1,000 yards and having a standout performance in the Mountain West Championship Game.