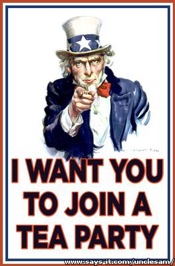 The loosely organized Tea Party, the conservative movement known for lashing out against health-care-reform legislation, wasn’t quite able to grab hold of recent GOP caucuses in the conservative bastion of El Paso County. Still, leaders claim they won a “toe-hold,” writes the Colorado Springs Gazette.

Meanwhile, across the nation, the populist movement has gained a “foothold” in American politics, according to Politico, which attempts to debunk many of the stereotypes surrounding the Tea Party, such as the accusation that it is comprised of angry white guys. A poll suggests that a majority of the movement’s backers may be women.

Count Lu Ann Busse, head of the Colorado coalition of the “tea partyesque” 9.12 Project, among them.

“How do you justify figuratively or literally beating up on grandmas and moms with children in tow? It just does not look good,” the 54-year-old grandmother wrote in a blog post last month, declaring women “the Tea Party Super Majority.”