The Gothic Theatre sound guy figured he had a few minutes to wire the stage for the next band, some Seattle trio. Then he looked up and saw the group’s scruffy lead singer striding toward him, strapping on his electric guitar, and sending screechy feedback blasts through the amplifiers. The audio engineer hastily returned to the soundboard in the middle of the crowd to crank up the vocals. By then, the singer, Kurt Cobain, along with the two other members of that night’s second opening act—a band by the name of Nirvana that also included bassist Krist Novoselic and drummer Dave Grohl—had kicked off their opening song, “School.” “It was immediately apparent they didn’t give a fuck about anything,” recalls Doug Kauffman, the Gothic’s promoter at the time. “Which was one of their more admirable traits.”

The band had pulled its van up to the Gothic, which sat next to a used car lot on Broadway in Englewood, earlier that day, June 10, 1991. Nirvana had just spent the last month meticulously laying down the final tracks for its second album, Nevermind, at Sound City, a studio in Los Angeles’ Van Nuys neighborhood. (In 2013, Grohl produced a popular documentary about the life of the studio, which now houses Fairfax Recordings.) The band had signed on to open for Dinosaur Jr. during a short, eight-date tour. That night in Colorado, the group played mostly older songs such as “About a Girl,” “Stain,” and “Sliver.” But their second song was a new anthem, one they’d recorded several weeks earlier and had only played live twice before: “Smells Like Teen Spirit.” 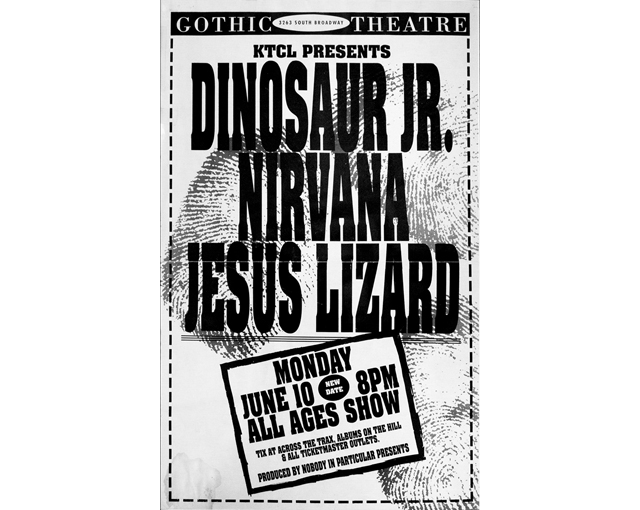 The poster for the Gothic concert; Photo courtesy of Doug Kauffman

Like the rest of the audience, I’d never heard the song, which was as loud and hard as anything by Dinosaur Jr. but also had a melody that seemed instantly familiar. I’d arrived at the show with a friend named Thrasher Joe, a 19-year-old University of Colorado Boulder student and Gothic regular who loved Skinny Puppy and Slayer, dyed his black hair blacker, and wore thick punk rock bracelets. Thrasher Joe had advised me weeks in advance to pay attention to this unknown band, but I ignored him. As the music writer for the Daily Camera in Boulder, I penned three paragraphs previewing the show, almost all about the headliner.

As Joe and I watched the bodies flying around the Gothic’s mosh pit, we had no idea “Smells Like Teen Spirit” would go on to have such a profound impact on music and culture. Upon its release three months later, the single would transform the members of Nirvana from unknown punk rockers into multiplatinum-selling pop stars; pull MTV away from featuring hair-metal bands; redefine popular fashion as a mix of flannel shirts and ripped jeans; and, while Cobain was famously reluctant to acknowledge or take credit for it, establish a new cultural identity for kids in the ’90s. Again, we didn’t know this that night at the Gothic; what we did know was that the band’s brief set had a unique energy. “They played ‘Smells Like Teen Spirit’ exactly as it was on the album, and that didn’t happen all the time,” says Charles R. Cross, author of the Cobain bio Heavier Than Heaven, who didn’t attend the show but has studied Nirvana recordings and set lists from that time. “They were sincerely trying to put the songs across. In some ways, you were seeing a more pure Kurt Cobain than you were seeing a month later.”

Lantz Barbour, 52, a veteran Fort Collins movie and TV cinematographer who attended that show as a student DJ for Colorado State University, also sensed he was watching something significant. “[We thought], Nirvana is on to something big,” Barbour says. “We could tell they were going to be at the forefront of a major musical genre shift.”

Built in the 1920s as an art deco silent-movie house on Broadway, the Gothic was a shuttered pornography theater when Kauffman, then 29, happened by with a friend. The Rainbow Music Hall, near the corner of Evans Avenue and Monaco Parkway, had just closed, and the promoter realized there wasn’t a 1,000-seat Denver venue catering to rising bands that weren’t quite big enough for Red Rocks Amphitheatre. (The Ogden Theatre, Bluebird Theater, and Fillmore Auditorium wouldn’t open for another few years.) Kauffman rented the Gothic in January 1990 for $1,850 a month. The venue opened with a show by glam metal band Faster Pussycat and then three straight nights of Chicago industrial hard rock band Ministry. Those shows were profitable enough to cover the opening costs of the venue. “We didn’t do a lot of renovating,” Kauffman says. “Back then, it was a grungy, dirty place. The bathrooms were horrible.”

Befitting its name, the Gothic had a kind of dark magic. Though less urban, the venue was Denver’s version of the venerable New York City punk rock nightclub CBGB. While top promoters focused on booking the Moody Blues and John Denver for Englewood’s Fiddler’s Green Amphitheatre, Kauffman brought in Sonic Youth, Alice In Chains, the Red Hot Chili Peppers, Skinny Puppy, My Bloody Valentine, Tool, Soundgarden, and Nirvana.
Many of those bands landed hit songs and toured extensively, but it was Nirvana’s eventual success that helped launch radio stations dedicated to alternative music and made way for those bands to sell out basketball arenas.

When that happened—in late 1991 and early 1992—Denver’s little punk rock scene, which revolved around the Gothic and like-minded venues such as the Garage/23 Parrish, began to change too. “All that stuff had been bubbling,” recalls Mary Jo Kaczka, who attended Nirvana’s Gothic show and today is a prominent tour manager and event coordinator. “You felt like you were part of something for a couple of years [that] was getting ready to explode.”

Nirvana was the second of two opening bands that night in June, after Chicago’s cacophonous the Jesus Lizard. The Seattle group played for about 36 minutes, with a set that included three songs from Nevermind: “Teen Spirit,” “Breed,” and “Territorial Pissings.” As documented on a bootleg tape recorded by Jeff Benjamin—then a recent CSU graduate, now an elementary school teacher—the set is loud and moves from song to song without pause, except when Cobain tells a shaggy-dog tale about the band hitting a deer and selling it for meat. (“I’m just kidding!” he says.) Nirvana closed its set with “Blew,” after which the band quickly departed the stage to make room for Dinosaur Jr.

The headlining act had personally invited Nirvana on the tour; Dinosaur Jr. lead singer J Mascis, who had been paying attention to the best up-and-coming rock bands, was a fan. “Denver was the only town I remember someone [getting] sort of hostile with me: ‘Why was Nirvana opening for you guys?’ ” Mascis says. “It was like, ‘Well, yeah, I don’t know. We had the show, and we just asked them to play. I don’t know what to tell you.’ ”

By all accounts, Cobain, Grohl, and Novoselic were tired but approachable that night. CSU radio DJ Barbour got members of all three bands to record promotional snippets for campus radio programs. At some point after the band’s set, Cobain made his way up a staircase to the Gothic balcony. David Yow, the volatile frontman for the Jesus Lizard, recalls standing with Cobain in the last row during Dinosaur Jr.’s closing set, smoking a joint. Three months later, Nirvana released Nevermind, and on January 11, 1992, the record displaced Michael Jackson’s Dangerous in the top spot on the Billboard charts—and changed pop music forever.

Steve Knopper is a Denver-based Rolling Stone contributing editor and author of the book MJ: The Genius Of Michael Jackson. Email him at letters@5280.com.